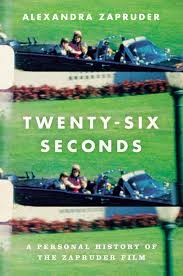 TWENTY-SIX SECONDS, A PERSONAL HISTORY OF THE ZAPRUDER FILM

Anyone who survived the 1960s can probably remember being asked: “Where were you when President Kennedy was assassinated?” I remember. I was in high school having lunch in the quad when the news was fed over my school’s public-address system. I was shocked and sickened by it. Like everyone, I shortly became aware that someone had filmed gunshots actually entering the president’s body. The film, about half a minute’s worth, was taken with a camera recording the president’s motorcade as it passed through Dealey Plaza in Dallas, Texas in November of 1963.

The amateur photographer was Abraham Zapruder. What he saw changed the course of history. It also altered the lives of Mr. Zapruder and his family, as we learn in the new book Twenty-six Seconds: A Personal History of the Zapruder Film by Alexandra Zapruder, Abe’s granddaughter and a leading figure in Holocaust studies. She points out that her grandfather, a manufacturer of dresses for teenage girls, was profoundly shaken by what he had filmed that day. He also recognized his responsibility for the film he shot, the difficult question of its ownership, and its historical, legal, and monetary value.

Alexandra deals with all these issues in her thorough and masterfully written history. The first question is who owns history? If the film is history itself, is it possible to own it? The answer is no one can own an event. The Zapruder film is only a tiny piece of the event it records. It must be screened and archived, but it can also be privately owned.

A quarter of a century later, Oliver Stone’s film JFK is a virtual grab-bag of the various conspiracy theories about the assassination. Twenty-Six Seconds deals with each of these, in turn, dismissing most of them. Alexandra feels the premise of JFK is historically dubious, even though her father advised the filmmakers and made the Zapruder film available to them.

Over decades, conspiracy theories are investigated by countless committees and commissions. Some of the official panelists express a strong mistrust of Zapruder and his family. They felt Zapruder unfairly profited from licensing and rentals. To me, these attitudes smack of antisemitism, although Alexandra doesn’t mention this. She does vigorously defend her family’s actions. Far from being a treasure trove, the Zapruder film eventually proved to be more of a headache. She stresses again and again that as custodians of the Zapruder film, her family always tried to do the right thing.

In this review, I’m rushing through years and pages of arbitration and documentation. Ultimately, copyright of the Zapruder film is assigned to the museum at Dealey Plaza which houses the Kennedy Memorial Museum which archives some 19 hundred films and documents. Alexandra points out that the event and the film will always be linked to the Zapruder family simply by virtue of their unusual name. More than that, the experience of the Zapruders teaches us how to think of more recent and monstrous events such as the Challenger disaster or the falling Twin Towers.

Comprehending the deeper meanings of inexplicable things is the mission of Alexandra Zapruder’s Twenty-six Seconds. I feel she succeeds admirably. After all, was there ever such a significant piece of history captured in half a minute’s time?   – Dan Erwine 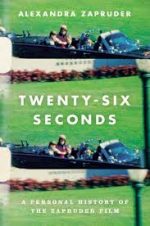 Dan Erwine holds a BS in Telecommunications, San Diego State University. Dan recently retired after four decades in radio broadcasting. His background San Diego stations KFSD and NPR's KPBS, and KUNR, Reno, NV. Over the years, Dan has produced and hosted a number of talk shows and interviewed over five thousand writers in almost every genre and career, from such notables as David Brin to Seamus Heaney, Allen Ginsberg, Judy Collins, Charlton Heston and Wally Schirra. Dan is a comic book aficionado and has a special interest in film, science fiction and mystery. He lives with his wife in Reno, NV.
More from this reviewer
PrevThe Atomic Weight of Love – Los Alamos Revisited
A Fine ImitationNext