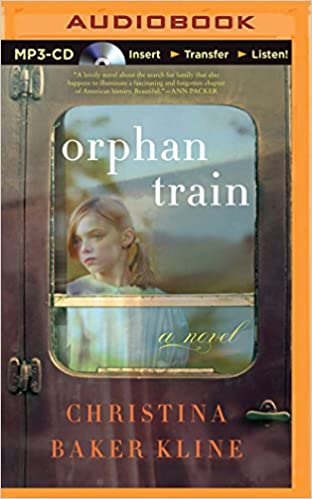 Orphan Train – From 1859 to 1929, America’s answer for what to do with orphans and indigent children.

Beginning in 1854 and continuing for seventy-five years, so-called ‘orphan trains’ transported indigent children from the east coast to adoptive homes in the Midwest.  I knew this had occurred, but until I read Christina Baker Kline’s novel, Orphan Train, I had no idea that the operation lasted well into the twentieth century, and I certainly didn’t know that nearly 200,000 orphans were so callously distributed.  Some, of course, found loving homes, but many more found servitude, brutal living conditions, and unbearable personal anguish.  Vivian Daly, in Orphan Train, finds all these things and more.

Kline sets up Vivian’s story retrospectively.  When the novel begins, Vivian is in her nineties.  She lives in Maine, where she and her deceased husband moved when they retired.  Now, she thinks, she should clean out her overfilled attic, get rid of the stuff of memories.  Seventeen-year-old Molly Ayer, sentenced to fifty hours of community service because she stole Jane Eyre from the library, comes to help.  Vivian doesn’t know the circumstances of Molly’s probation, but she’s grateful for the assistance.

Vivian’s story moves seamlessly from one recollected incident to another.  At first, her memories are triggered by what she and Molly find stored in the attic—a box of trinkets, a chest full of clothes, a pile of dog-eared books.  Later, as she and Molly begin to bond and as a contribution to one of Molly’s high school assignments, Vivian recounts her memories aloud.  In doing so, the reader and Molly alike learn some startling information about this elderly dowager’s life and loves, her trials and triumphs, the highs and the excruciating lows.  When her parents and siblings perished in a New York City tenement fire, young Vivian boarded an orphan train bound for Minnesota.  First, she was taken in by a couple who treated her as slave labor; later, she was sent to a failing farmstead where she suffered even more. How she pulls herself out of these circumstances and how she comes to live a comfortable retirement in Maine is at the heart of Orphan Train.  Suffice to say that Vivian’s journey is fitful, unpredictable, and utterly mesmerizing.

At the same time we’re learning Vivian’s life story, the reader also is getting to know Molly.  Her history is complicated, too, in ways reminiscent of Vivian’s plights.  Like Vivian, Molly had a grandmother she remembers fondly, a father who drank too much, a mother with mental issues.  Likewise, Molly has been passed unhappily from one foster home to another.  Another important parallel is their common thirst for books.  When Vivian finally learns that Molly stole Jane Eyre, she applauds.  And laughs.  Even their respective heritages mark the two in ways that echo and resound. Vivian, an Irish emigrant fresh off the boat, and Molly, part Wabanaki Indian, are both stigmatized in prejudicial ways. Kline portrays such repetitions of plot and personality with great finesse.  She trusts her readers’ insights and never overwrites, so that Vivian’s and Molly’s individual abandonments and attachments enrich each other’s stories and each other’s lives.

Thus Orphan Train, a successful novel in almost every way, ends on a particularly satisfying note.  Initially, the climactic scenes felt rushed to me, as if Kline were writing hastily and precipitously.  But in retrospect, I realize Kline was effectively opening up opportunities, exposing textures, and savoring options.  The finale propels both Vivian and Molly into futures full of possibilities.  Thinking about them now, I realize that Kline has sent their Orphan Train in totally satisfying directions.  – Ann Ronald

Also available by Christina Baker Kline: The Way Life Should Be; Bird in Hand; Sweet Water; Desire Lines; Vivian’s Choice; Room to Grow; The Conversation Begins (with Christina Looper Baker); A Piece of the World. 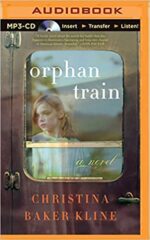 Ann Ronald is a retired English professor from the University of Nevada, Reno. Author of dozens of reviews, she’s also written a number of books about the American West. They include literary studies such as The New West of Edward Abby and Reader of the Purple Sage, cultural studies such as GhostWest and Oh, Give Me a Home, and nature writing such as Earthtones: A Nevada Album. Her latest is a work of fiction, Friendly Fallout 1953. Since retiring, she’s been reading vociferously, so “Bookin’ With Sunny” is giving her a wonderful opportunity to share thoughts about her favorite new discoveries.
More from this reviewer
PrevThe Casual Vacancy
Agnostic, A Spirited ManifestoNext