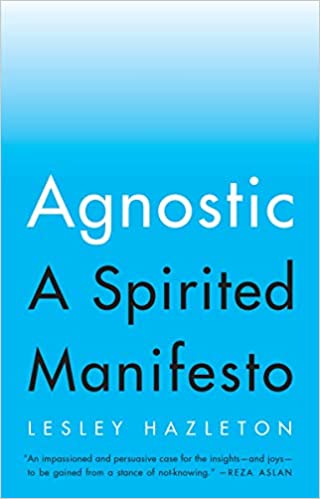 Agnostic, A Spirited Manifesto.  Something to believe in, or not.

Can there be an agnostic Christian, agnostic Buddhist, agnostic Jew, or an agnostic Catholic? (Yes, I know Catholics are Christians, I just wanted to emphasize that Christianity is a faith of many rooms.)  Exactly what is an agnostic? Is questioning one’s religion a death knell for faith?

As a cradle Catholic, I was drawn to Hazleton’s book for two reasons: first, the noun Agnostic was understood (by me) to mean a person who was unsure about God’s existence, and I’ve always wondered if there was more to that noun (there is); second, “A Spirited Manifesto” sounded redundant; I thought manifestos were, by definition, spirited, or at least, should be spirited. I was wrong on that count. A manifesto does not have to be spirited; in fact, one might read a “mission statement” as a plebeian manifesto. And, in that case, I’ve read plenty of un-spirited and even unimaginative manifestos.

Covid19’s required sequestering by seniors has been a blessing in disguise for this very senior book collector and retired bookseller. With almost as many books read and shelved as those “to be read,” Agnostic had been on my TBR stack(s) for some time before reading it. Agnostic is a “spirited” book (quite cheeky to have used that word, a close cousin to the word spiritual). Depending on one’s dictionary, “spiritual but not religious” are not necessarily disparate words to describe one’s life journey. Hazleton expands on that as “human yearning for an opening of mind and heart — a sense of soul and spirit that enhances day-to-day experiences instead of tamping it down and channeling it into the narrow confines of stick-and-carrot orthodoxy. It’s a rejection of traditional tenets and pieties, of doctrine, dogma, and judgment.”

Agnostic is not a book for the concrete-bound believer of any ilk. If, however, you love questioning or pondering really big issues like infinity or mathematics, physics, and, yes, even God/god/it/him/her, this is the book for you. Hazleton makes “no claims to truth, offers no certainties, eschews brashly confident answers to grand existential questions.”

The author captures in easily accessible language the gender-enhanced identity of an all-powerful God and the metaphoric world and words that soften our identity with such a being. And what about a promised life after death? In covering humankind’s need for answers or even assurances about life and death, Hazleton brings in the subject of where we often go to find answers. What better place than the grand architecture of cathedrals, temples, and mosques. Though they are all designed to be places of comfort as we struggle with the lives we live and whatever awaits us after death, she finds in them “an inherent paradox in trying to express infinity by enclosing space.”

The subject of trust is dealt with in the chapter entitled “In Doubt We Trust.” Quotes from Voltaire and St. Augustine, both espousing the unpleasantness and gloom of doubt cause the author to ask, “Yet, what, exactly, is imperfect about doubt?” Should the harsh realities of difficult situations be enough to deny one faith in the possibility of resolution? Hazleton asks the question of whether an agnostic can have faith. She answers: “What faith actually requires is not belief, but the ability to suspend disbelief.” Think on that quote for a while.

Agnostic is a book that can happily send you off in the most unthreatening ways. I had barely started reading the chapter on how humankind deals, or not, with mystery when I could hear Nelson Eddy’s Ah Sweet Mystery of Life. Further into the same chapter, I remembered my days as a bookseller and the day the realization came to me that in the middle of world turmoil, my customers never lost their taste for mysteries. Even under such circumstances mysteries always outsold religion. In that case, coming to a bookstore to buy the latest Sue Grafton or Patricia Cornwell is not far different from going to church, temple, or mosque. I think what I love most about having worked in a bookstore is that the store became a physical metaphor, a cathedral, a place where all manner of questioning is alive and well.

The following two chapters, “Making Meaning” and “Everything and More,” confirm the appropriateness of the Agnostic subtitle, A Spirited Manifesto. Agnostic is a lively manifesto written with wit and wisdom. Hazleton’s generous inclusion of her sources might lead the now curious reader to read a bit further.

The last chapter, “Imperfect Soul,” is the most personal as the reader follows Hazleton’s journey into an agnostic identity. She never proselytizes, only invites the reader into her world of questioning without fear. It is a world of opened windows and doors, walls torn down, fences dismantled, and pages turned and read.  –  Sunny Solomon

Also available by Lesley Hazleton: The First Muslim; Jezebel: The Untold Story of the Bible’s Harlot Queen; After the Prophet: The Epic Story of the Shia-Sunny Split in Islam; England, Bloody England: An Expatriate’s Return; Confessions of a Fast Woman; Mary, A Flesh-and-Blood Biography of the Virgin Mother; Driving to Detroit; Jerusalem, Jerusalem A Memoir of War and Peace, Passion and Politics 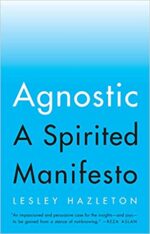 Sunny Solomon holds an MA in English/Creative Writing, San Francisco State University. She is a book reviewer for “The Clayton Pioneer” and her poetry and other writing has been published in literary journals, one chapbook, In the Company of Hope and the collection, Six Poets Sixty-six Poems. She was the happy manager of Bonanza Books, Clayton, CA and Clayton Books, Clayton, CA. She continues to moderate a thriving book club that survived the closure of the store from which it began. Sunny currently lives next to the Truckee in Reno, NV.
More from this reviewer
PrevOrphan Train
A Well-Behaved WomanNext