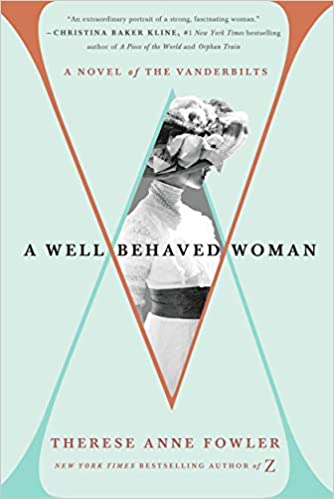 A Well-Behaved Woman, A Novel of the Vanderbilts.

A novel of Alva Vanderbilt’s twenty-year marriage in the Gilded Age.

It is tempting, sometimes, for a reviewer to review the book she wishes the author had written rather than the book that actually exists.  Such is the case with Therese Anne Fowler’s novel about Alva Smith Vanderbilt Belmont, A Well-Behaved Woman. As I read, I wanted a different take on this extraordinary historical figure.  Fowler made choices I might not have made, so it would be easy to critique her fictional portrayal. That would be a mistake! A Well-Behaved Woman is an outstanding depiction of the particular facet of Alva’s life that most fascinates Fowler—Alva’s twenty-year marriage to William Kissam Vanderbilt and her prescribed role in Gilded Age high society.

To demonstrate those years, Fowler necessarily has to be superficial, to write froth, because that is exactly how the wealthy women of Alva’s generation were supposed to behave. Underneath the façade, Alva is much more substantial (as later events would prove), but during her Vanderbilt marriage, she needed to “fit in.” Fowler does a superb job of imitating the conversations, the ostentation, the one-upmanships, the marital manipulations and machinations, the facile ignoring of obvious infidelity and indecent behavior. In some ways, A Well-Behaved Woman is almost a parody of these women’s lives, although they played their roles with deadly serious intent, and Fowler smartly mirrors their facades.

Daughter of a Southern plantation owner who had fallen into financial ruin after the Civil War, Alva belonged on a high societal rung. Her family desperately needed money; the Vanderbilts craved her family’s public prestige. Alva and William hardly knew each other. Following an awkward courtship, their marriage of convenience was essentially loveless. William, grandson of the man who built the Vanderbilt fortune, sought pleasure, nothing more. Showering Alva with jewelry and clothes while spending more money on yachts and mansions, he essentially bought his wife’s silence while he was free to cavort and carouse wherever and whenever he chose.

Alva enjoyed motherhood (although there’s considerable irony in the fact that she rushed their daughter into a marriage as devoid of love as her own). Alva also took joy in designing and decorating houses, happy distractions from her unhappy marriage. She also dreamed of a different life, especially one that included marital love. Early on, she finds herself attracted to one of William’s best friends, Oliver Belmont, scion of another exceedingly wealthy family. He obviously finds Alva attractive, too, although they never succumb to their unspoken feelings as long as Alva remains married to William. Nevertheless, the tacit thread of romance winds subtly throughout A Well-Behaved Woman’s pages.

I suppose it’s the romantic in me that wanted more about Alva and Oliver’s affections. After the Vanderbilts divorce, Alva and Oliver’s relationship did indeed lead to courtship and an eight-year marriage filled with love but sadly cut short when Oliver died from a ruptured appendix. Fowler devotes few pages to their happiness, nor does she go into much depth about the remaining twenty-five years of Alva’s life. Alva and her daughter played key roles in the Women’s Suffrage Movement, arguing vociferously for equal rights for women while contributing healthy sums of money to the cause. Any of these storylines—Alva’s love for Oliver, Alva’s treatment of her daughter and their subsequent realignment, Alva’s considerable contributions to Women’s Suffrage—could be a separate novel on its own, one I would have enjoyed reading perhaps more than the shallow angst of Alva’s relationship with William.

But as I wrote at the outset, the latter is the story that Fowler chose to tell. And she does so with aplomb. Given the historic material she chose as her focus, Fowler has written an excellent novel of the Gilded Age, its expectations, its horrendous contortions, its overbearing control of people’s lives. Alva, in Fowler’s eyes, is A Well-Behaved Woman, rightly so.  –  Ann Ronald

Also available: by Therese Anne Fowler: Z, A Novel of Zelda Fitzgerald; A Well-Behaved Woman, A Novel of the Vanderbilts; Souvenir; Exposure; A Good Neighborhood 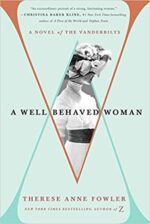 Ann Ronald is a retired English professor from the University of Nevada, Reno. Author of dozens of reviews, she’s also written a number of books about the American West. They include literary studies such as The New West of Edward Abby and Reader of the Purple Sage, cultural studies such as GhostWest and Oh, Give Me a Home, and nature writing such as Earthtones: A Nevada Album. Her latest is a work of fiction, Friendly Fallout 1953. Since retiring, she’s been reading vociferously, so “Bookin’ With Sunny” is giving her a wonderful opportunity to share thoughts about her favorite new discoveries.
More from this reviewer
PrevAgnostic, A Spirited Manifesto
Numbered AccountNext