Home » Reviews » A Piece of the World

A Piece of the World 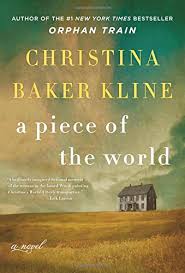 A PIECE OF THE WORLD

Any review of Christina Baker Kline’s novel, A Piece of the World, must begin with Andrew Wyeth’s masterpiece, “Christina’s World.”

https://www.moma.org/collection/works/78455  Finished in 1948 and regarded as one of Wyeth’s finest paintings, “Christina’s World” shows a young woman “on a planet of grass,” crawling toward a ghostly distant house. “This is a girl who has lived through broken dreams and promises. Still lives. Will always live on that hillside, at the center of a world that unfolds all the way to the edges of the canvas.” Christina Baker Kline fictionalizes a piece of that girl’s universe, telling the story of Christina Olsen’s circumscribed life on the isolated coast of Maine.

Andrew Wyeth spent summers there. His soon-to-be wife introduced him to Christina Olsen in 1939.  Intrigued by the painterly possibilities of this rural countryside and fascinated by Christina’s oblique personality, the artist almost immediately set up a studio in an unused upstairs bedroom in the Olsens’s house.  For years, he painted the remote surroundings from every imaginable angle; Christina posed for him, as did her brother Al. Wyeth explains in A Piece of the World that he was trying to achieve “something timeless and otherworldly.”  He was also trying to capture something of himself as well as of the scenes before his eyes.  Sketching what he saw over and over again, and then using the medium of egg tempera, he generated painting after painting, probing the secrets of the landscape and its inhabitants.

Interspersed with descriptions of Wyeth’s artistic growth, and with his deepening understanding of the Olsen siblings, are Christina’s memories of her younger years.  Afflicted with what was probably polio when she was a child, she grew increasingly immobile as she aged. Her parents disregarded her affliction, forcing her to drop out of school and tasking her with caring for her brothers.  Finally, she had to take care of her dysfunctional parents, as she and Al put their lives and their dreams on hold.

According to A Piece of the World, however, Christina had an intellectual energy that matched Andrew Wyeth’s own.  They both loved Emily Dickinson’s poetry, especially #1263. “Tell all the truth but tell it slant – Success in Circuit lies.” Christina’s life, indeed her whole personality were aslant, while Wyeth was seeking deepest truths in his art.  Both agreed that circuitry generates the best effects, though Wyeth’s perfectionism and Christina’s reticence at times ran circuitously afoul of others. Happily married, Wyeth nonetheless needed to spend his days alone with his art. Lonely by choice, as the years passed, Christina cut herself off from almost every social contact.  By middle age, she rarely left the empty house, which had no electricity, no running water, and no heat other than what could be generated by a wood stove.

A poignant sense of lost opportunity characterizes A Piece of the World’s tone.  But Christina’s headstrong perseverance and Wyeth’s developing talent overlays the novel’s tragic potential.  When “Christina’s World” is finished, the reader understands what a masterpiece has been created.  Kline’s final chapter, which unveils the finished painting to the Olsens, resounds with an artistic optimism that overcomes the tragedy of circumstance.  Wyeth truly has made Christina’s world timeless and worthwhile. Looking at the painting through Christina’s eyes, Kline conveys that vividly at the novel’s close.  “What she wants most—what she truly yearns for—is what any of us want: to be seen. And look. She is.”   – Ann Ronald 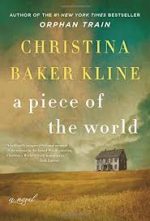 Ann Ronald is a retired English professor from the University of Nevada, Reno. Author of dozens of reviews, she’s also written a number of books about the American West. They include literary studies such as The New West of Edward Abby and Reader of the Purple Sage, cultural studies such as GhostWest and Oh, Give Me a Home, and nature writing such as Earthtones: A Nevada Album. Her latest is a work of fiction, Friendly Fallout 1953. Since retiring, she’s been reading vociferously, so “Bookin’ With Sunny” is giving her a wonderful opportunity to share thoughts about her favorite new discoveries.
More from this reviewer
PrevWhy Poetry Today? The Adult Bookstore, that’s why
The Zimmerman TelegramNext