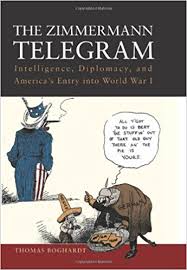 THE ZIMMERMAN TELEGRAM: INTELLIGENCE, DIPLOMACY, AND AMERICA’S ENTRY INTO WORLD WAR I

One hundred years ago, April 6, 1917, the United States declared war on Germany and entered World War I on the side of France, Great Britain, Russia, Japan, and Italy among others.  Ever since, historians, journalists, and second-guessers have asked two big questions: why did the U.S. wait so long to enter the war (the war began in 1914), or why did the U.S. declare war at all?  For the remainder of Americans (the vast majority), World War I spurs almost no interest.  It was one of America’s many forgotten wars, merely a prelude to that vastly more interesting conflict, World War II.  This is indeed unfortunate because World War I was the seedbed for much of world history since then.

In the spirit of remembering a war in which about thirty-eight million people perished, I am reviewing here one of the more interesting books about America’s decision to enter the war, Thomas Boghardt’s The Zimmerman Telegram. Boghardt’s book reminds us, in the spirit of our own time, “Who knew it was this complicated?”

In school texts, America’s decision to enter World War I generally follows a paragraph about President Wilson’s determination to keep us out of the war and the sinking of the Lusitania.  While President Wilson’s 1916 campaign motto “He kept us out of war” contains more truth than most such slogans, and thus has some bearing on the matter, the sinking of the Lusitania, by contrast, had almost nothing to do with abandoning our neutrality.  It is at this point that Boghardt’s perspective becomes valuable in that he reminds us that, for most of the century since 1917, those who have seriously inquired about our entry into the war have had to decide to what degree the Zimmerman telegram was the proximate cause of our declaration of war.

Some background is necessary although one has to be careful about getting lost in the weeds, a disorienting possibility that Boghardt himself occasionally falls victim to.  Arthur Zimmerman was the German Foreign Secretary during the crucial months of January-April 1917 when the decisive events occurred.  In January the German high command of General Eric Ludendorff and Field Marshal Paul von Hindenburg, who had effectively become the German civilian as well as military chief executives, had decided that Germany would resume unrestricted submarine warfare (USW) on February 1.  Zimmerman and other highly placed Germans assumed that USW would bring the Americans into the war against Germany.  As any competent diplomat would attempt to do, he searched for counterweights to such an eventuality.  He hit upon two possibilities, both of which he pursued simultaneously.  The first involved getting Japan to abandon its treaty with the Allies.  The second involved getting Mexico to declare war on the U.S. if the U.S. declared war on Germany.  Should Mexico declare war and be victorious against the Americans, Germany would then encourage Mexico to reassert its control over Texas, New Mexico, and Arizona, all the typical stuff of early 20th century diplomacy. (California would go to the Japanese.)

To dangle this tempting morsel in front of Mexico required a rapid transmission of Zimmerman’s bait to Mexico in January 1917.  How to do that? How did it find its way to American eyes? Did it prompt our entry into the war?

Beyond Zimmerman’s writing and sending his famous telegram, the story becomes absolutely Byzantine in its complexity.  Nevertheless, Boghardt details the ensuing story with great dexterity, subtlety, and excitement.  It includes spies, technological wizardry, misinformation, lying on the record, manipulating public opinion, and gullible public officials on both sides of the Atlantic.  Along the way, Boghardt digs into previously unused archives, undercuts old beliefs, and forges a more convincing interpretation than the one laid out by Barbara Tuchman more than sixty years ago in her highly readable, The Zimmerman Telegram.

If you are interested in the U.S. involvement in World War I, this book is well worth the challenge it may offer to your intellectual digestive tract.  – Neal Ferguson 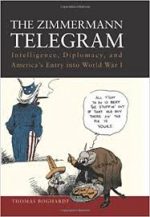 Neal Ferguson is a self described Anglo-phile. After studying for a PhD in British history and doing research for a year in various British archives, he came to the University of Nevada in 1970 to teach. Soon he found himself in administration where he remained until 2003. After returning to full-time teaching a decade ago, he decided to concentrate his teaching energies on Medieval British history and various global aspects of World War II. Dedicated to Ambrose Bierce’s proclamation that the purpose of war is to teach Americans geography, Neal insists that his students accompany him (in class) to sundry east European rivers and steppes, African deserts and jungles, south-east Asian mountain ranges and peninsulas, and small islands and coral reefs in the Pacific. Currently he is writing a book about the ups and downs of General Douglas MacArthur’s military reputation.
More from this reviewer
PrevA Piece of the World
Returning a Borrowed TongueNext