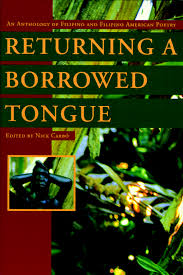 RETURNING A BORROWED TONGUE: AN ANTHOLOGY OF FILIPINO AND FILIPINO-AMERICAN POETRY

Returning a Borrowed Tongue allowed me to listen in on a conversation about the Philippines and its immigrants to the United States—a topic I hardly asked questions about, despite my own parents’ emigration to the U.S. in the 1970s. Edited by Nick Carbó, Returning a Borrowed Tongue was originally published in 1995. Today the anthology continues to illuminate a body of literature that has been “denied, lost, hidden, or forgotten.

Following the experiences of Filipino immigrants and their children, Returning a Borrowed Tongue offers nuanced portrayals of language loss, transformation, and revival. For some Filipinos, language is lost through assimilation in the United States; for others, language is transformed by personal relationships. In the following excerpt from Merlinda Bobis’ poem “Word Gifts for an Australian Critic,” the speaker is a Filipina whose marriage to a foreigner provides the impetus for this reflection on ties to language and family:

I bring you words freshly
pried loose from between my wishbone,

Mate those lips,
then heave a wave in the throat,
and lull the tip of the tongue
at the roof of the mouth.
Mahal, mahal, mahal,
“Love, love, love” – let me,
in my tongue.
Then I’ll sing you a tale,
Oyaiiyaiiyaii, oyayi, oyayi,
Once, mother pushed the hammock
the birthstrings severed from her wrist
when I married
an Australian.

Bobis’ poem succeeds in its phonological exploration of Tagalog, and what’s satisfying about the language is that it does not rely on linguistic terminology. Instead, Bobis slows down the production of each sound through a series of images. To imagine the lips mating, then to picture a wave heaving from the throat, followed by a lull of the tongue, is such an intimate, sensory experience. The narrative generates a feeling of melancholy, as the speaker implies that straddling the line between two languages produces tension in the mother-daughter relationship. However, Bobis sets up this narrative like a lullaby, framing the personal tragedy as a tale to be sung. In this poem as well as many others in Returning a Borrowed Tongue, Carbó showcases writing that portrays the underside of grief, often positioning beauty, humor, and lamentation side by side.

Melo’s “Unlearning English” was the first poem I turned to in this anthology and the reason I kept reading: I felt that I’d walked in on a joke I’d heard before but never saw on paper. According to the speaker of this poem, unlearning English:

is slow. Tedious. Like midnight mass on Christmas Eve.
The mating of tortoises. The struggle with strands
of jumbled phonics, hybrids of “Hoy, how are you,”
half-remembered tsismis, gossip from Grandma.
There are times when my tongue is ready to burst,
all synapses to language are gone
and I understand what happened
at Babel. Each sentence I speak is
a taffy pull.

Melo’s comparison between “unlearning English” and “midnight mass on Christmas Eve” recalls memories of simbang gabi, and the utterance of “Hoy” evokes fondness for the ways in which Filipino friends and relatives get each other’s attention. Because of these familiar moments, I feel a personal connection to this piece. Poets from other bilingual traditions have said this before—different languages play various roles in our lives. For me, English is the language I articulate myself because I was educated in English. While I studied Spanish for eleven years, I can never understand it intimately because I did not acquire it as a child; Tagalog, which I never studied formally, feels like home—it is the language in which my parents and grandparents tell their stories. “Unlearning English,” among other poems that incorporate Tagalog phrases, offers the familiarity of a language left behind during the process of assimilation.

Ripe with sensory detail and storytelling, Returning a Borrowed Tongue offers an intimate encounter for Filipino or Filipino American readers. Nevertheless, the particularity of the experience is one of many routes to the universal. These poems allow for a local audience to recognize their stories in literature, while showing a global readership another point on the spectrum of the human condition. As I’ve found in this anthology, a body of literature rooted in particular histories lends itself to narrating experiences that would otherwise be subsumed or erased. For readers and writers alike, Returning a Borrowed Tongue is an entry point into a conversation that has been left behind or undiscovered.   – Joanne Mallari 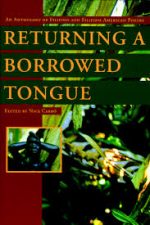 Joanne Mallari holds a BA in English (Writing) with a minor in Spanish from the University of Nevada, Reno. She currently teaches preschool at St. John’s Children’s Center. Her interests include poetry, shower recitals, and dancing at random. Joanne lives in Reno, NV.
More from this reviewer
PrevThe Zimmerman Telegram
Maud Martha – Living the American DreamNext