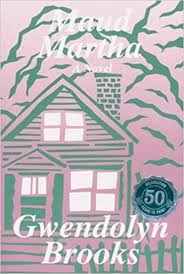 I don’t even know when I bought Maud Martha or what it was that made me finally pull it off my shelf to read back in December of 2013. From college classes, I was familiar with Gwendolyn Brooks as a poet. In 1950, she was the first black American to win a Pulitzer Prize. It was for Annie Allen her book of poetry. She was Poet Laureate of the State of Illinois from 1958 until her death in 2000 and U. S. Poet Laureate in 1985. So why did I not know that she had written a novel?

I’m guessing I had purchased my Third World Press edition of Maud Martha in Berkeley at least ten years before retiring and moving to Reno. At that time, I was in the habit of buying books with the ridiculous belief that upon retirement I would spend the rest of my days reading, one by one, all those books. It’s embarrassing to admit that when I did sit down to read it in 2013, I was surprised it was not a book of poetry (yes, I bought it based on her name and took no notice of the words “A Novel” beneath the title). I read it in one sitting. It was stunning, and as much as I wanted to write a review shouting out, “You must read this book,” I did not.

But this morning, after reading about two new books celebrating the one-hundredth year of Gwendolyn Brooks’ birth, I knew it was time to reread Maud Martha. Whatever editing work was waiting for my attention would have to wait. Once again, Maud Martha was a one-sitting read. This novel, first published in 1953, a collection of vignettes describing the life of Maud Martha, a black woman (born in 1917, the same year as the author) and raised in Chicago. It is a book that deserves to be at the top of every book lovers’ “must, really must, read” list.

If this were merely a book review, I would extol the beauty of Brooks’s writing. Her attention to the details found in Maud’s life: the flowers in her back yard; the wind that carries neighborhood children on their way to school; and even the real reason why the fat girl does not run with her classmates to make it to school before the last bell rings; most ordinary details, but in Brooks’s hand, extraordinary ones which often define the true value of all our lives.

The narrator tells us what is happening in Maud Martha’s life as if we are watching it occur as if Maud Martha has no idea her life is being recorded. The chapters are short and vary in length from three to nine pages, hence the reason the book has always been reviewed as vignettes. Like poetry, every word counts and each chapter title tells us all we need to know about the passage of time: spring landscape: detail; home; death of Grandmother; first beau; second beau; the kitchenette; Maud Martha spares the mouse; Mother comes to call, and so forth. Except for proper names, the titles all begin in lower case letters, suggesting that Maud Martha is low-key, which makes its depth all the more compelling.

Maud Martha’s life is full of color.The mysterious painted music she loves is described as “deep blue, or delicate silver” on Page 1. Turn the page and dandelions are “Yellow Jewels for studding the patched green dress of her back yard.” On this second reading, I took note of the “patched green dress of her backyard,” wondering why I’d missed “patched” the first time around. Maud’s backyard was not mine where dandelions were considered weeds. Her school is “Brownish-red brick, dirty cream stone trim.” Even the bricks are a lesser red, and what could have been a faded cream trim became unmistakably “dirty.” I missed those words the first time out when they simply meant old. I got it on the second read. When walking in the evening just beyond her neighborhood, “you saw fewer people, and those you did see had, all of them (how strange, thought Maud Martha), white faces.”

By Chapter 5, the brief tale of a Caucasian classmate coming to visit her at home (“Often it was said that colored people’s houses necessarily had a certain heavy, unpleasant smell.”) ends with Maud experiencing “A sort of gratitude! It sickened her to realize it. As though Charles, in coming, gave her a gift.” I cannot remember why, but I knew that bit about the smell of a colored home. As a white reader, that chapter was most uncomfortable. Even more uncomfortable were the words “necessarily had.”

Maud Martha dreams of New York as many Midwest Caucasian girls might dream of Hollywood. She was not afraid of dreaming, “What she wanted to dream, and dreamed, was her affair.” “She was eighteen years old, and the world waited.” In describing herself as she thinks her sweetheart Paul sees her, not “the very lowest pretty,” such as “a little curly-haired thing the color of cocoa with a lot of milk in it.” Maud doesn’t hesitate to see herself “the color of cocoa straight.”

She and Paul are most ordinary young newlyweds with dreams of fixing up their first apartment. Anybody reading this (if ever married) can easily connect with Maud’s story until Brooks comes to the part about the size of the units, the shared bathroom with other tenants, the rental contract that does not allow for any sort of “fixing-up.” My own “newlywed” apartment was a roomy two-bedroom in the Lake Merritt district in Oakland. Unlike Maud and Paul, we could live wherever we chose. When I first read about Maud and Paul going to a downtown theater, I remember thinking, how uncomfortable they must have felt with Paul, “. . . wanting to see a few, just a few, colored faces. There were only their own.” At a second reading, it was I who felt uncomfortable.

Moving past the book review, I asked myself, “What makes a book more meaningful the second or third time around (yes, I fully intend to read Maud Martha again)?” The year 2017 is very different from 2013. Maud Martha is still a gentle young woman, the middle of three siblings, a younger brother, and a beautiful, slightly older sister. None of that has changed from reading the book four years ago. But something in me has changed. As much as I had valued Gwendolyn Brooks as a female poet, her blackness did not really factor into anything beyond her poetry being written by a black American. In 2013, I had not yet read Isabel Wilkerson’s recently released The Warmth of Other Suns. Had I read this book before first reading Maud Martha, I would have understood that Chicago’s crowded black apartment houses were a direct result of the Great Migration. I also had not reread Ellison’s Invisible Man. Nor had I read Jacqueline Woodson’s I Hadn’t Meant to Tell You This. In 2013 the topic of “White Privilege” had not generated exclusive social media groups. And the killing of unarmed black people by police, if not new, certainly seemed more prevalent by 2017.

If reading The Warmth of Other Suns brought me to the interchangeability of Apartheid and Segregation, why did it now hit me so hard or take so long? I’m a lifelong reader; I started off with horse books and poetry, then mysteries, histories, and finally onto college reading lists. If I read something by a black American, it stood out, was something to be read alongside those books by white Americans. It was not the same as just reading a book by an American writer. The same can be said for almost any minority author. I don’t believe my peers and I ever read them as just another American author.

As a book reviewer and as a member of a book club, I’ve always liked pushing the literary envelope, encouraging myself and others to read beyond our comfort zones. Rereading Maud Martha this year, put me in that uncomfortable place. The beauty of Maud Martha, is Gwendolyn Brooks, herself. I’ve already gone back to her poetry, at least the two or three of her books on my shelf, but beyond that, I am thinking it’s time to put the other black poets back where they belong, alphabetically with the rest of my shelved poetry: such as Countee Cullen next to Olga Broumas, Audre Lourde next to Amy Lowell and Louise Clifton next to Joshua Clover.

If America’s racism is to ever be something of the past, its past must be a part of our present. Readers can do something about that. Not everyone will think reading more black or other minority writers will make a difference, but if we read these writers not alongside white writers, but with white writers, there’s a chance their stories, their poems, can be understood as part of our American culture, not apart from our American culture. Brooks’s novel may not have the violence or sex or powerful political criticism contained in other novels written by black Americans, but it speaks to those same issues. It deserves to be singled out as not only good but important and even necessary.

These novels and books of poetry should be read as American Literature. Some of it will be read for pleasure and some will be studied in schools and universities. But it is white Americans who, flat-out love books and reading, who should be rushing to bookstores and libraries to see what we’ve been missing. The voices and words of black and other minority authors are telling their American stories, which are also ours, not only the stories we know but those we don’t know or would rather not know. As a fellow-reader, I encourage you, read Maud Martha, which will mean looking a little harder for a copy because it is currently out of print.  –   Sunny Solomon

My thinking on this subject is hardly new as evidenced by this Langston Hughes poem:

I, too, sing America,
I am the darker brother.
They send me to eat in the kitchen
When company comes,
But I laugh,
And eat well,
And grow strong.

Tomorrow,
I’ll be at the table
When company comes.
Nobody’ll dare
Say to me,
“East in the kitchen,”
Then.

Besides,
They’ll see how beautiful I am
And be ashamed —

Buy a book today
Bookshop offers low prices and has a mission to financially support local, independent bookstores and book sellers like Bookin’ with Sunny. We receive a commission on orders placed through our links to Bookshop – thank you.

Sunny Solomon holds an MA in English/Creative Writing, San Francisco State University. She is a book reviewer for “The Clayton Pioneer” and her poetry and other writing has been published in literary journals, one chapbook, In the Company of Hope and the collection, Six Poets Sixty-six Poems. She was the happy manager of Bonanza Books, Clayton, CA and Clayton Books, Clayton, CA. She continues to moderate a thriving book club that survived the closure of the store from which it began. Sunny currently lives next to the Truckee in Reno, NV.
More from this reviewer