SPQR, A History of Ancient Rome 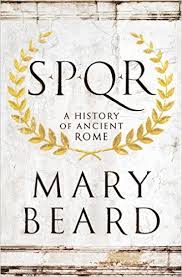 If you like your history presented as a vast panorama, you will likely enjoy SPQR (Latin for the Senate and the Roman People). If you also like your history replete with vivid personalities, witty observations, and compelling narrative, you will have additional reasons to read SPQR.  But beware! This book covers 1,000 years of Roman history and no matter howeconomically writtenn it is still substantial. At 800 pages SPQR is a hefty book even in electronic format. Still its length should not deter you if you have a scintilla of interest in ancient Roman history. How can one not be interested in or curious about Romulus, the Sabine women, Caesar, Caligula and Marcus Aurelius?

If you think about Rome in terms of the rise and fall of the empire, SPQR is about the rise of the Roman Empire; it is about “how Rome grew and sustained its position for so long, not about how it declined and fell . . . .”  Most of this book, then, is about Rome’s growth into an empire, a process that was complete hundreds of years before Rome began to be ruled by emperors. Until that time (about 28 BCE) Rome was a Republic but was also an empire.  This is not so strange if you think about France during the late 19th century. It, too, was a Republic, but had an empire that included parts of Africa, Asia, the South Pacific, and the Caribbean.  Or closer to home, the USA has always been a Republic but it, too, has had an empire that included at one time or another Cuba, Hawaii, Alaska, and the Philippines.

Mary Beard begins SPQR in the misty past when supposedly Romulus and Remus founded a dusty village on the banks of the Tiber and called it Rome, or was it Aeneas who founded Rome, the very same Aeneas who had previously escaped from Troy when the Achaean Greeks destroyed the city with a Trojan Horse? That’s a problem with foundation myths.  They are myths. Think of George Washington and cherry trees!  Ferreting out the grains of truth they may contain is a messy and imprecise business.  Alas, it is likely that Rome was founded neither by Romulus and Remus nor Aeneas although both myths fed directly into the literary imaginations of Romans 600 years later, Romans of 100 BCE trying to explain how a sleepy agricultural town had become the center of the world.

Mary Beard is exceptionally skilled at the ferreting-out-process.  She has the rare ability to present a historical narrative with its ambiguities intact. She lets the reader see her mind at work as she analyzes the various sources concerning a particular event or person. Her presentation of the Catiline Conspiracy of 63 BCE is one of many examples of her prowess as a historian. She focuses a high-resolution lens on the empire at that moment, a vast empire that as yet had no emperors. The Catiline Conspiracy was ultimately between two incandescent personalities, Catiline and Cicero, each representing significant conflicting Roman values that had been locked in tension and conflict throughout Rome’s development to that point and would continue to be so into the future.  (Think of the tension between liberty and equality in the American experience.)  In 63 BCE Rome was torn by an existential crisis from within.  Who should be sovereign: the Senate or the Roman People?  Which, if either of these men, best represented one or another of these conflicting values?

We know of the conspiracy in detail because so much about it was written down and has survived more than 2,000 years. Through a careful assessment of the written sources, Beard shows with great clarity how they shaped the story and how their biases and limitations affect our understanding of it.

SPQR is a tour de force, an engaging story that entertains and instructs.   –  Neal Ferguson 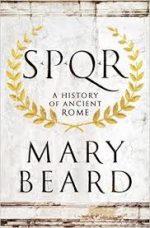 Neal Ferguson is a self described Anglo-phile. After studying for a PhD in British history and doing research for a year in various British archives, he came to the University of Nevada in 1970 to teach. Soon he found himself in administration where he remained until 2003. After returning to full-time teaching a decade ago, he decided to concentrate his teaching energies on Medieval British history and various global aspects of World War II. Dedicated to Ambrose Bierce’s proclamation that the purpose of war is to teach Americans geography, Neal insists that his students accompany him (in class) to sundry east European rivers and steppes, African deserts and jungles, south-east Asian mountain ranges and peninsulas, and small islands and coral reefs in the Pacific. Currently he is writing a book about the ups and downs of General Douglas MacArthur’s military reputation.
More from this reviewer
PrevMaud Martha – Living the American Dream
Night SchoolNext