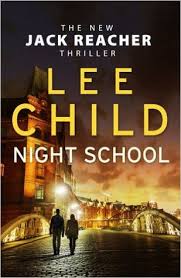 Night School, Lee Child’s twentieth Jack Reacher novel, isn’t the first I’ve reviewed for “Bookin’ with Sunny’ and probably won’t be the last.  For a variety of reasons, I genuinely enjoy these thrillers.  Childs always sends his protagonist into an inventive but plausible real-world situation.  He does so imaginatively, drawing upon relevant headlines and then extrapolating.  The action of Night School follows this formula adroitly.  I can’t tell you exactly how because part of the fun of this novel is watching Reacher figure out exactly what the bad guys are hoping to accomplish.  But I can say that Night School opens with a hint of ‘someone’ selling ‘something’ to unnamed foreign interests. The price?  One hundred million dollars, which gets the attention of a government all too happy to deploy the mysterious Jack Reacher.

To keep the ongoing series energetic, Child varies the timing.  Sometimes a Reacher novel takes place in the present, while at other times Child reverts to preceding years.  Night School occurs in 1996 when Major Jack Reacher was still a military policeman, but one with an unusual portfolio. The novel opens with an awards ceremony, where Reacher receives a Legion of Merit medal for a tacit task that no one quite acknowledges but that clearly involved assassination.  Almost immediately he is given another top-secret assignment.  Find out what could possibly be worth one hundred million dollars, and stop the deal.

What follows is a string of instinctual choices followed by a series of hostile encounters, as Reacher stutter-steps through a shifting array of secretive dead-ends and information highways.  The reader knows that this larger-than-life hero will ultimately be successful because he always emerges victorious. But sharing his intuitive logic, vicariously enjoying his physical prowess, and relishing his successes are the pleasures of reading a Jack Reacher novel.

This storyline differs from most Lee Child plots, however, in that the lone wolf must this time cooperate with others.  He receives his Night School assignment alongside two co-equal partners, an FBI agent and a CIA operative.  A ranking deputy from the National Security Council not only oversees the trio, but actively participates in the decision-making and subsequent deeds, too.  In addition, Reacher and his two cohorts can add staff, so Sergeant Frances Neagley (who has been featured in other Jack Reacher thrillers) joins the action.

Such collaboration is unusual, and I must say it was the one feature I disliked about this novel. I didn’t mind Sergeant Neagley’s participation, but I was put off by the horde of other minds and bodies.  I guess I prefer Jack Reacher pure, an isolated Lone Ranger or Shane figure riding into trouble, curing a region’s ills, and then departing alone into the sunset.  To involve a host of other players in Night School’s reasoning and confrontations sounded off-key to me as if too many stringed instruments were interfering with a melodious French horn.

In sum, I thoroughly enjoyed reading this latest Jack Reacher success.  As always, Lee Child writes well, with a staccato prose that echoes the novel’s narrative progress. As always, too, the plotting dances through the pages, with a story that will keep the reader thoroughly engaged.  I won’t say that Night School is my favorite Jack Reacher novel, though.  My vision of this man calls for more autonomy and less interaction with others.  I want him remote, larger-than-life, and utterly independent.   –  Ann Ronald

Also available by Lee Child: Bad Luck and Trouble; The Affair; Personal; The Midnight Line; The Enemy; Echo Burning; Killing Floor; Persuader; The Enemy; Running Blind; Tripwire; Never Go Back; Nothing to Lose; The Hard Way; Gone Tomorrow; 61 Hours; A Wanted Man; Inherit the Dead; One Shot; No Middle Name; Without Fail; The visitor; Die Trying; Make Me; Worth Dying For; High Heat; Deep Down; Second Son; Not a Drill; Small Wars. 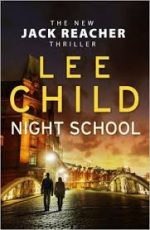 Ann Ronald is a retired English professor from the University of Nevada, Reno. Author of dozens of reviews, she’s also written a number of books about the American West. They include literary studies such as The New West of Edward Abby and Reader of the Purple Sage, cultural studies such as GhostWest and Oh, Give Me a Home, and nature writing such as Earthtones: A Nevada Album. Her latest is a work of fiction, Friendly Fallout 1953. Since retiring, she’s been reading vociferously, so “Bookin’ With Sunny” is giving her a wonderful opportunity to share thoughts about her favorite new discoveries.
More from this reviewer
PrevSPQR, A History of Ancient Rome
The MareNext