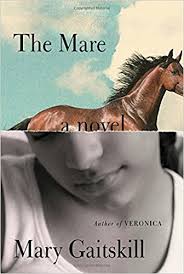 For those of us who know what it’s like to love horses, The Mare is so much more than another story about a horse and a girl who loves the horse.  It is also the story of the mother who loves the girl, and another woman who longs to be a mother to that girl and, finally, every person who comes in contact with both the girl and the horse.

The novel occurs in a three-year period and has two locations: Brooklyn and upstate New York. The girl, eleven-year-old Velveteen, takes part in a summer program which gives needy kids the chance to spend two weeks with a far-from-needy family in upstate New York. Velveteen’s Dominican Republic-born mother is never a willing participant in the endeavor and Ginger and Paul, the couple who are assigned Velveteen, have conflicting issues that shadow their enthusiasm for the experience.

Velveteen’s hesitancy in the venture is cracked open when she visits a nearby stable and comes up against a horse named Fugly Girl. Fugly (damaged and almost as untouchable as the girl) and Velveteen slowly and dangerously connect. Velveteen and her “summer mother” manage a relationship as slow to develop, but not so physically challenging. Gaitskill’s characters are never what is initially seen. Ginger is both more and less than the wife of a college professor, living a very upscale life. Both she and her husband are recovering alcoholics, but Ginger is also a failed artist and a woman who has never had a child. Both losses are powerful and haunting.

The initial summer visit has a rocky start but improves when the manager of a stable near Ginger’s and Paul’s home discovers a latent equestrian in Velveteen. At the same time, it’s also Velveteen’s introduction to the mercurial world of horse people and the animals in their care. Both humans and horses are often meaner than the streets back in Crown Heights, and the issue of trust is as difficult for Velveteen as it is for Fugly Girl. The author’s skill at describing horsemanship, horse behavior, horse shows, and the culture of boarding stables is spot on.

With great apprehension, more visits, are planned for the remainder of that first year, as well as the two years that follow. Such visits play havoc with Velveteen’s relationship with her mother and younger brother. Should a parent give up their child to spend short periods of time with folks who can offer more chances than available in Brooklyn’s Crown Heights? Should a young girl on the edge of womanhood have to make choices she is ill equipped to make, especially, as the visits increase, knowing the places her growing equestrian skills could take her?

And for Ginger and Paul, can this summer daughter become the child Ginger has always wanted and is that what Paul wants? The book is written in multiple voices, each one a nuanced revelation. Velveteen’s voice is strongest, and when the novel ends (not necessarily the story) Velveteen looks back her on her experiences centered around “her” mare and weighs them against what her future may bring. She knows this much: “I will see her again. My Mare.”

Also available by Mary Gaitskill: Bad Behavior; Two Girls, Fat and Thin; Because They Wanted To; The Rubbed Away Girl; Veronica; Don’t Cry; Today I’m Yours; No Tokens; The Little Boy; Somebody with a Little Hammer. 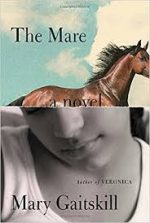 Sunny Solomon holds an MA in English/Creative Writing, San Francisco State University. She is a book reviewer for “The Clayton Pioneer” and her poetry and other writing has been published in literary journals, one chapbook, In the Company of Hope and the collection, Six Poets Sixty-six Poems. She was the happy manager of Bonanza Books, Clayton, CA and Clayton Books, Clayton, CA. She continues to moderate a thriving book club that survived the closure of the store from which it began. Sunny currently lives next to the Truckee in Reno, NV.
More from this reviewer
PrevNight School
The Orphan Master’s Son – Back for a Second LookNext