Home » Reviews » Why Poetry Today? The Adult Bookstore, that’s why

Why Poetry Today? The Adult Bookstore, that’s why 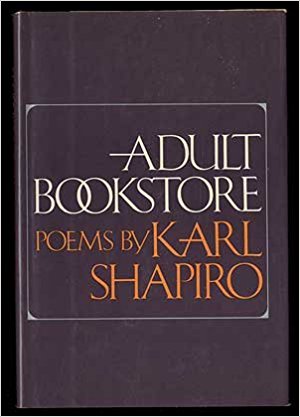 I love books, poetry, and bookstores (especially ones with used books). I write poetry, I read poetry, but I will avoid reviewing poetry at every opportunity. On my monthly trek to the Bay Area in June, my daughter and I found our way to Green Apple Books (a longtime favorite) containing an upstairs filled with poetry books forgotten, forlorn, and forgiven enough to find commercial shelves upon which to remain while waiting for the likes of me to discover Karl Shapiro’s Adult Bookstore.

Karl Shapiro (1913-2000) is a poet I’ve enjoyed and collected for years, a few new and just as many used. Adult Bookstore is about midway in his books of/on poetry, the last being Coda: Last Poems, compiled, edited, and introduced by Robert Phillips. It usually takes me a while to read what I buy, and it’s seldom before shelving it. For some reason, shelving AD became second to reading it and before long, one Shapiro book led to another, and I’d pulled the rest of my stash out for another read. I had forgotten he wrote one of my favorite poems, Buick, which was from an early edition of Person Place and Thing. A poet who writes about a car? Yes, and bugs, universities, racism, Greek mythology, and war and peace. He, like William Carlos Williams, found value “in no ideas but in things.” Things are easily recognized and become accessible mirrors of our ideas.

The difficulty in tackling poetry is figuring out who your audience is. Most poetry is reviewed academically, by teachers, students, or the poets themselves. How about commentary for a general reader? Do general readers read poetry? I wish more of them did, but here goes anyway.

Let’s start with the book’s title poem, Adult Bookstore. The store referred to is without a name, but with an identifiable location: Dubious enterprises flourish here,/The massage parlor, the adult bookstore. The poem contains a steamy and seamy catalog of wares, everything from books and pictures to toys and antiques. Shapiro wraps it up in the last stanza: The expense of spirit in a waste of shame/Is sold forever to the single stag/who takes it home in a brown paper bag. And yes, there is some rhyme amid the truth.

You do not need to be a scientist to appreciate his poem about the first moon landing in 1969. He writes of his neighbor on the night before the landing: His lights were on and in between them shone/The light leaves of the eucalyptus tree/Whose barely moving tracery/Revealed the spaces of the night that hides. We know immediately of the tracery he writes and the space, mostly outer, but could be inner, that is about to be redefined forever.

Nor does a reader need to know that the word “Eclogue” is by definition a poem in which shepherds converse, because in Shapiro’s poem Eclogue: America and Japan (July 1853) any reader with eyes can tell it is a conversation of some sort by the identifying feature of an “A” for the American and a “J” for the Japanese voices. Poetry sails into history just as forcefully as Commodore Perry, aboard the Susquehanna, demands entry into the forbidden land of Japan.

What I especially love about poetry is the introduction to topics I know little about, such as Beethoven’s will. Beethoven’s music and his deafness are not new, but the poetic rewriting of his last Will and Testament is a stunner. It has already made me pull out some CDs and add the Beethoven biography Life, written by American Alexander Wheelock Thayer, to the search list for the next bookstore expedition.

Along with the above is my dreadfully inadequate background in Greek mythology. In a fitting tribute to the title of Shapiro’s book, Adult Bookstore, is the final poem, The Rape of Philomel. After reading this poem, I headed straight for my copy of The Stories of the Greeks, by Rex Warner, and read his retelling of this shocking story of sisterhood to the max.

So, there you have it, no discussion of line breaks, meter, stanza structure, or post-modernism. Shapiro writes about what we know or should know, what we remember and what we should never forget. A practical, if not exactly esthetic reason to read poetry is that most books, if not collections of the poet’s work, are mercifully short on length. If you do not feel inclined to buy a book by Shapiro, at least Google his poetry. Reading poetry, like the adult bookstore itself, can be a very private, but meaningful experience.  – Sunny Solomon 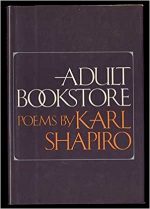 Sunny Solomon holds an MA in English/Creative Writing, San Francisco State University. She is a book reviewer for “The Clayton Pioneer” and her poetry and other writing has been published in literary journals, one chapbook, In the Company of Hope and the collection, Six Poets Sixty-six Poems. She was the happy manager of Bonanza Books, Clayton, CA and Clayton Books, Clayton, CA. She continues to moderate a thriving book club that survived the closure of the store from which it began. Sunny currently lives next to the Truckee in Reno, NV.
More from this reviewer
PrevThe Twelve Lives of Samuel Hawley
A Piece of the WorldNext