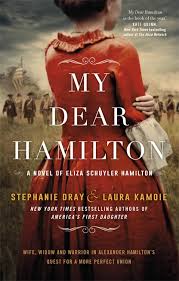 MY DEAR HAMILTON, the unsanitized version of U.S. history seldom taught to school children. Dray and Kamoie set us straight.

Clearly, my generation of school children was taught a sanitized version of United States history! I assumed that the origins of our country were untidy, but I don’t think I ever fully appreciated how truly messy the American Revolution in fact was. Perhaps it takes fiction to bring real chaos to life. Such was the task undertaken by Stephanie Dray and Laura Kamoie, whose first novel, America’s First Daughter (which I reviewed in “Bookin’ with Sunny” in August 2016) exposed Thomas Jefferson by focusing on his daughter. Now the two authors have repeated this investigative pattern, looking at Alexander Hamilton through the eyes of his wife, Eliza.

Of course, My Dear Hamilton, like America’s First Daughter, goes far beyond the fictional explication of a founding father. Most important, it delves into the life and imagined heart and mind of a woman who is living history as it develops, a woman whose entire being is caught up in the crucial events of her time. Eliza Schuyler Hamilton came from well-to-do New Netherlands stock. Her father was a general, and through him she met most of the prominent young men who figured so importantly in the Revolutionary War and in the founding of the United States. One of those young men, George Washington’s aide-de-camp, was Alexander Hamilton. He swept Eliza off her feet.

Retrospectively, Eliza confesses: “I hadn’t married a man. I’d married a mythic hero who’d driven a carriage of the sun across the sky.” At the time, after her husband’s death in the infamous duel with Aaron Burr, she is rereading Hamilton’s letters and his published words, probing the life he led, looking for more insight into the inner man. She asks herself: “Who was Alexander Hamilton? And answers enigmatically. “A traitor or patriot? A visionary or a fool? A gentleman or a fraud?” I would say, after reading My Dear Hamilton, that he indeed was all those things, and more.

The novel approaches the couple’s courtship, their marriage, their parenting, their private and public personas, their places in history, from only one point of view, Eliza’s. An extensive “Note from the Authors” explains how little is known about Hamilton’s helpmate and how much had to be imagined. This was at the heart of their creative task, to get inside Eliza’s psyche as she was experiencing the highs and lows of her marriage and the successes and failures of Alexander’s (and the fledgling country’s) political existence. Here is where the novel is so fascinating and so astute, imaginatively probing the couple’s relationship while outside forces roil the strength of their bonds.

As the ancient schoolgirl fed a façade of philosophical glitter about The Federalist Papers and The Constitution, I learned little about the nasty, borderline unethical, political infighting of our country’s early years. In truth, the factions and the scandals, the unrighteousness and the smears, were apparently just as querulous in the late eighteenth century as they are in the early twenty-first. My Dear Hamilton effectively digs into the dirt of two and a half centuries ago. While this is titillating, the real strength of the novel lies in how it centers our attention on the subtleties. Personal foibles, flawed friendships, inadvertent indiscretions, obvious miscalculations, and long-held secrets touch families and individual lives even as they irrevocably are affecting historical events.

One more insightful rendition of a woman faithfully in love with a myth/a man who turns out to be all too human, My Dear Hamilton takes the reader on an insightful journey through history and through love. – Ann Ronald

Also available by Stephanie Dray: A Year of Ravens; A Day of Fire (with Ben Kane, E. Knight, Sophie Perinot, Kate Quinn, Vicky Alvear Shecter); Lily of the Nile; Song of the Nile; Daughters of the Nile; The Princess of Egypt Must Die; The Gingerbread Princess, America’s First Daughter.

Ann Ronald is a retired English professor from the University of Nevada, Reno. Author of dozens of reviews, she’s also written a number of books about the American West. They include literary studies such as The New West of Edward Abby and Reader of the Purple Sage, cultural studies such as GhostWest and Oh, Give Me a Home, and nature writing such as Earthtones: A Nevada Album. Her latest is a work of fiction, Friendly Fallout 1953. Since retiring, she’s been reading vociferously, so “Bookin’ With Sunny” is giving her a wonderful opportunity to share thoughts about her favorite new discoveries.
More from this reviewer
PrevMoonglow
Another BrooklynNext