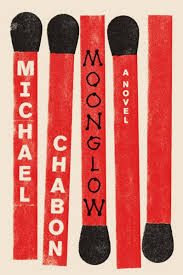 While I was reading Michael Chabon’s Moonglow, I found myself growing impatient. The circuitous storyline, which drifted in time and often wound in on itself, didn’t seem to be getting anywhere. In retrospect, however, I recognize Chabon’s brilliance in crafting Moonglow in such a convoluted fashion. The novel is, after all, a retrospective composite of memories expressed by an elderly man. Sitting by the bedside of his dying and normally taciturn grandfather, the narrator records a suddenly garrulous spate of reminiscences that no one in the family had ever heard before. And those nostalgic musings necessarily are untidy.

In just a few days, the narrator hears details of his grandparents’ courtship and marriage, exploits of his grandfather’s youth in the pre-World War II Jewish slums of South Philly, hints of his grandmother’s wartime experiences in Germany, anecdotes of successes and failures that range from space program triumphs to New York’s Wallkill prison to Florida retirement ennui. Love, insanity, elation, despair, and endurance. As the book cover states, Moonglow “revisits an entire era through a single life and collapses a lifetime into a single week.” That the grandfather’s memories are jumbled and often topsy-turvy is something the reader only discovers by delving into the book.

Neither does the book cover reveal the curious genre obfuscation of Michael Chabon’s creation. It identifies this narrative as “A Novel,” but the plot closely resembles a memoir recounted by a grandson named Mike Chabon. What prevents Moonglow from being a memoir is Chabon’s enhancement and embroidery. The fictional anecdotes are full of misrecollections and misperceptions and understatements and exaggerations, all overlaid by the vagaries of age. Sometimes Mike’s grandfather, for example, repeats the same story but tells it differently than on the previous day. What is true or truest? The reader must decide.

Midway through the novel, the grandson ponders all that is being unveiled by his grandfather. “Right up to that afternoon,” Mike muses, “I believed (and for the most part believe still) that silence was darkness, and that naming shone a light. I believed that a secret was like a malignancy and confession a knife, a bright hot beam of radiation that healed as it burned.” Hearing the horrors of war, from his grandfather’s perspective and from his grandfather’s understanding of Mike’s grandmother’s experiences, Mike no longer is sure of the efficacy of confession. “When it came to things that needed to be said, speech was always preferable to silence, but it was of no use at all,” Mike realizes, “in the presence of the unspeakable.”

Sometimes Mike also learns too much about the grandparents’ personal relationship, and about his mother’s upbringing, but like his entire family this narrator is a survivor. Whatever happens, and whatever he learns, leads to enlightenment rather than to despair. And this, finally, is what the reader of Moonglow retrospectively feels. Chabon’s novel is an astute expression of how ordinary people process and shed light on family stories, family disasters, family triumphs. Glossing an entire generation, Moonglow reminds us of our shared humanity, so for those of us seeking to understand our parents and grandparents’ lives, reading Moonglow is an illuminating experience. – Ann Ronald

Also available by Michael Chabon: The Amazing Adventures of Kavalier & Clay; The Yiddish Policemen’s Union; Telegraph Avenue; The Mysteries of Pittsburgh; Wonder Boys; Gentlemen of the Road; The Final Solution; Summerland; Maps and Legends; Werewolves in Their Youth; A Model World; Pops; The Astonishing Secrets of Awesome Man; Manhood for Amateurs; Thrilling Tales; The Amazing Adventures of the Escapist; Casanova Acedia; JSA All Stars; Super Heroes, Fashion and Fantasy. 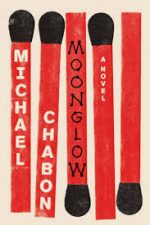 Ann Ronald is a retired English professor from the University of Nevada, Reno. Author of dozens of reviews, she’s also written a number of books about the American West. They include literary studies such as The New West of Edward Abby and Reader of the Purple Sage, cultural studies such as GhostWest and Oh, Give Me a Home, and nature writing such as Earthtones: A Nevada Album. Her latest is a work of fiction, Friendly Fallout 1953. Since retiring, she’s been reading vociferously, so “Bookin’ With Sunny” is giving her a wonderful opportunity to share thoughts about her favorite new discoveries.
More from this reviewer
PrevThe Girls in the Picture
My Dear HamiltonNext