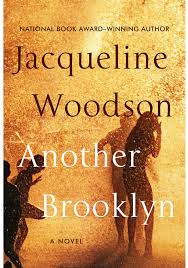 To read anything by Jacqueline Woodson is to expect the unexpected, not only for the stories themselves but for the imaginative way they are written. Another Brooklyn is no exception.

Woodson’s second adult novel is a story of a grown woman’s remembered adolescence. The memories begin for the reader not when August returns to Brooklyn for her father’s funeral and shares the facts of that return. The first eleven pages take up the funeral, the introduction of her brother (a devout member of the Nation of Islam), a short reference to a black Brooklyn in a 1970s’ white culture, and the facts of her leaving Brooklyn to travel the world as an anthropologist. Following the funeral, she and her brother lovingly share a meal at a diner before she takes the subway back to her father’s apartment. “There were clothes to be donated, old food to throw out, pictures to pack away. For what? For Whom?”

The memories of her adolescence begin when seated in the subway car she looks up and sees “Sylvia” sitting across from her. As if we the readers know who Sylvia is. From that point on, the intimacy of August’s memories never lets up. And although these are August’s memories, they exist inside the friendship of four singularly remarkable young girls, Sylvia, Gigi, Angela, and August.

August, her brother and her father are Brooklyn transplants from a not quite innocent life in rural Tennessee. It is an unhappy exodus, one made without her mother. The period of adjustment to inner-city life with its traffic, drugs, pop music, and ever-present street danger takes place under the watchful eye of a father who knows and fears the risk of bringing his children back to the streets of his youth. “The green of Tennessee faded quickly into the foreign world of Brooklyn, the heat rising from cement.”

August’s memories happen in the black streets of Brooklyn, and you might ask, how does a white reader fit into this story? I have read Another Brooklyn several times, and with each reading, as parallel events in my own adolescence surface, I become more and more vested in the lives of these four girls. How do any of us remember our school years and those friends we were lucky enough to almost hold together before high school ends?

Woodson touches adolescence so finely that when its pain surfaces, we are reminded of our own experiences, which in turn endears all her characters to us — their dreams, betrayals, successes, and failures. Family secrets, divorce, addictive parents, the secret excitement of their sexuality in response to the boys, girls, and men in their lives, all weigh heavily in their surviving adolescence.

What lifts this novel from almost every other coming-of-age story is Woodson’s writing. Her sparse paragraphs with space between them leaving room for the reader to take it all in and pause, if you will.  Although not a long story, it is not one to rush through.

The reading of Another Brooklyn, the story of a young woman of color’s journey into her memories of her Brooklyn adolescence became for this reviewer, a powerful and moving memory of its own.   –   Sunny Solomon

Also available from Jacqueline Woodson: Brown Girl Dreaming; If You Come Softly; Miracle’s Boys; Each Kindness; Show Way; Locomotion; After Tupac and D Foster; Coming on Home Soon; I Hadn’t Meant to Tell You this; This is the Rope, A Story from the Great Migration; From the Notebooks of Melanin Sun; Visiting Day; Peace Locomotion; Behind You; The House You Pass on the Way; Feathers; Jacqueline Woodson; Last Summer with Maizon; The Other Side; Hush; The Dear One; Maizon at Blue Hill; Pecan Pie Baby; Beneath a Meth Moon; Our Gracie Aunt; Sweet, Sweet Memory; We Had a Picnic this Sunday Last; Between Madison and Palmetto; Autobiography of a Family; Harbor Me; The Day You Begin; Lena; Lena; No Such Thing as the Real World; The Book Chase; If You Come Softly; Martin Luther King, Jr.; Way Out of No Way; Write Now; Guys Read the Distance. 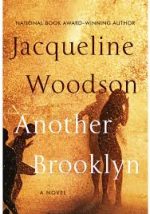 Sunny Solomon holds an MA in English/Creative Writing, San Francisco State University. She is a book reviewer for “The Clayton Pioneer” and her poetry and other writing has been published in literary journals, one chapbook, In the Company of Hope and the collection, Six Poets Sixty-six Poems. She was the happy manager of Bonanza Books, Clayton, CA and Clayton Books, Clayton, CA. She continues to moderate a thriving book club that survived the closure of the store from which it began. Sunny currently lives next to the Truckee in Reno, NV.
More from this reviewer
PrevMy Dear Hamilton
EducatedNext