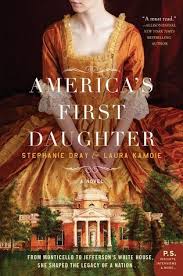 America’s First Daughter – From Monticello to Jefferson’s White House, She Shaped the Legacy of a Nation

Patsy Jefferson’s mother died when her daughter was only ten years old. At the time, Martha Jefferson extracted one promise from her husband—that he would never remarry—and one promise from her little girl—that she would care for her father always. Thus Martha set in motion the symbiotic relationship between Patsy and Thomas Jefferson that would last until the death of the third American president, and even beyond the grave. Stephanie Dray and Laura Kamoie have written a powerful novel that explores what may have transpired between this famous father and his lesser-known daughter as they interacted together on history’s stage.

America’s First Daughter begins with Jefferson’s death. A grieving Patsy is going through his correspondence, getting rid of letters that might dishonor him in any way. As she reads, she remembers her own emotions at the time of each letter’s composition. Thus, Dray and Kamdie’s novel can reconstruct Jefferson’s initial reaction to his wife’s death, reflected in Patsy’s adult memories. In truth, Jefferson mourned to the point of madness, while Patsy played a far more mature role than one might expect of a child. This becomes the structural pattern of America’s First Daughter—a letter to be saved or burned, followed by a chapter of Patsy’s recollections.

After Jefferson recovers, the narrative moves to France. There, the American statesman becomes embroiled in the French Revolution, while Patsy pushes toward adulthood. Her reactions to French society, to clothes, to men, and even to politics, mature as her experiences expand and deepen. She also must learn to accept her father’s maneuverings around his vow to her mother. He will never remarry, true, but he definitely will have relationships with women. After a liaison with a French noblewoman, he takes up with one of his slaves, Sally Hemming. Patsy must learn to accept what is always unspoken but tacitly clear.

What Patsy really wants to be is the number one female in Thomas Jefferson’s life. Even when she marries, she follows her father’s dictates rather than her own heart, keeping herself close to the father she adores. (Spoiler Alert: I’m giving away the plot in advance, alas, although I promise there will be more fictional intrigue for an America’s First Daughter reader to discover.) Unfortunately for her new husband, he can never be the number one man in Patsy’s life. That role is reserved for her father, even though she was married to Thomas Randolph for nearly thirty years and gave birth to twelve children! When her father needs her as his White House hostess, for example, off to Washington, D. C., she goes. Always, her father’s career takes precedence over Randolph’s wishes and needs.

Anyone who channels American history will love America’s First Daughter. It not only speculates about facets of Thomas Jefferson’s personality never before explored, but it thoroughly examines the roles and functions available to women in late eighteenth and early nineteenth century Europe and America. Patsy, smart and well-educated, has few choices. Men determine her fate. Yet she has opinions, and can manipulate with extraordinary effectiveness. This novel speculates about Sally Hemming’s role, too. Like Patsy, she made hard choices for herself and for her children. The scenes that open and close America’s First Daughter highlight the power struggle between Patsy and Sally that never quite resolved itself, even after Thomas Jefferson’s death. The scenes also reveal the sanitizing of Jefferson’s reputation, Patsy’s final display of personal power in what is a very powerful piece of fiction. – Ann Ronald

Also available by Stephanie Dray: A Year of Ravens; A Day of Fire (with Ben Kane, E. Knight, Sophie Perinot, Kate Quinn, Vicky Alvear Shecter); Lily of the Nile; Song of the Nile; Daughters of the Nile; The Princess of Egypt Must Die; The Gingerbread Princess.

Also available by Laura Kamoie: Irons in the Fire (nonfiction). 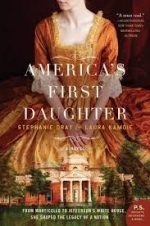 Ann Ronald is a retired English professor from the University of Nevada, Reno. Author of dozens of reviews, she’s also written a number of books about the American West. They include literary studies such as The New West of Edward Abby and Reader of the Purple Sage, cultural studies such as GhostWest and Oh, Give Me a Home, and nature writing such as Earthtones: A Nevada Album. Her latest is a work of fiction, Friendly Fallout 1953. Since retiring, she’s been reading vociferously, so “Bookin’ With Sunny” is giving her a wonderful opportunity to share thoughts about her favorite new discoveries.
More from this reviewer
PrevThe Travelers
Wild at Heart – A National Treasure at RiskNext