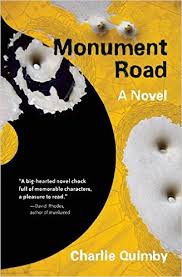 Influenced by Ann’s recent review of Charlie Quimby’s latest novel, Inhabited, I requested a review copy of Quimby’s earlier novel, Monument Road. Having now lived in Northern Nevada for more than six years, I am learning how the landscape surrounding our towns and cities is often a strong influence on how we live our lives, especially if we stay put. Staying put in our rapidly developing western states is not always easy. If you live in or around Grand Junction, Colorado as Leonard Self does, staying put can be life-altering.

Monument Road is a full-bodied story of faith lived deeply, love recognized and sometimes unseen, and the cumulative weight of loss. Before her death, aging rancher Leonard Self promises his wife Inetta that exactly one year from her death he will take her ashes to Artists Point. Inetta is very clear, “I want to be good and dry. Me and Jesus’ll be watching, and I want to float for a while.” What he does not tell her is that her ashes are not the only thing he intends to throw into the canyon.

Thus, the novel begins at what will be its end. “For seventy-some years, he had stayed put here where the Rockies start to give up their grip at the alkaline shore of a sagebrush sea that spills all the way to Oregon.” From this beginning, everything in between is Leonard’s life before and after meeting Inetta when his high bid wins her picnic lunch. The reader meets Inetta, her young brother Elliot, and other folks, young and old, who will reappear throughout the novel. Besides Inetta’s rock-solid faith in God’s overarching plan for every person, including people like Leonard who claim to have no need for such plans, the one other given in this story is its title, Monument Road, the road into and out of Grand Junction and the surrounding Colorado National Monument.

Until Leonard’s Uncle Abner dies while out checking on a calf, the two men had for years lived alone on the family’s Reverse Dollar Ranch outside Grand Junction. Eventually, Leonard and Inetta, a most unlikely couple, marry and make a life for themselves on the ranch. Not a fast-paced novel, Quimby takes his time describing the landscape and people who become part of Leonard and Inetta’s story.  The Selfs marriage does not include children, yet, beginning with Elliot, there are young people who become for periods of time a part of their personal and ranch life, deeply imprinting themselves, for good and bad, on Inetta and Leonard.

The stark beauty of Colorado National Monument does not make its inhabitants immune from crime and/or stupidity. A young high school girl falls off the ledge of a canyon while attending a church outing. Years later, the choir master’s wife falls to her death not far from the first event. A third victim loses his life when his truck goes off the side of the road. These deaths, all found but not necessarily believed to be accidents, profoundly affect the lives of those they leave behind.

The pace of the story increases as the one year from Inetta’s death approaches. Without any spoilers, two people who had left the area return in the wake of failed marriages. Joe, who was a friend of the young high school girl who fell to her death, begins to work for the local newspaper, covering a highly publicized story of sexual child abuse. The woman who returns involves herself in the lucrative real estate boom that could create dramatic changes to a land of dying cattle ranches. Both returnees find Leonard and Inetta on their radar. Events taken place years ago begin to resurface, and things Leonard had believed to be true are no longer seen in the same light. His date with Inetta’s ashes at Artists Point is drawing closer, but like most of us, Leonard would like to leave this earth with his affairs in order, and it does not appear that time is on his side.

Monument Road is a novel as rich in the landscape Quimby describes as it is in the range of characters he portrays. A thoroughly satisfying read.   – Sunny Solomon 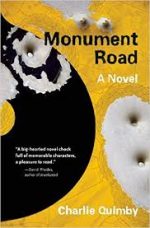 Sunny Solomon holds an MA in English/Creative Writing, San Francisco State University. She is a book reviewer for “The Clayton Pioneer” and her poetry and other writing has been published in literary journals, one chapbook, In the Company of Hope and the collection, Six Poets Sixty-six Poems. She was the happy manager of Bonanza Books, Clayton, CA and Clayton Books, Clayton, CA. She continues to moderate a thriving book club that survived the closure of the store from which it began. Sunny currently lives next to the Truckee in Reno, NV.
More from this reviewer
PrevRaising Wild
Between the World and MeNext