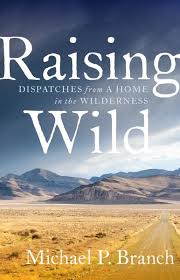 RAISING WILD, DISPATCHES FROM A HOME IN THE WILDERNESS

Michael P. Branch, author of a book of essays titled Raising Wild, manages what some would say is an impossible task, a literary oxymoron of sorts. While writing about the very serious business of raising his daughters, and while including detailed expositions of academic endeavors, of evolution, of natural history, of wide-ranging literary texts, and of a host of other intellectual forays, Branch overlays all these serious topics with a rollicking sense of humor, with a belly-busting guffaw on nearly every page.

My favorite essay is “My Children’s First Garden,” a typical “dispatch” from their home in the wild. The Branches live north of Reno, Nevada, where the Great Basin Desert dominates the scenery and where their home stands isolated at the end of an often slick, sometimes mud-bound country road. The setting is an acquired taste, an apparently barren land of juniper, bitterbrush, and sage. Yet Mike finds the place a paradise. “This landscape has a clarity and presence unmatched by any other I’ve experienced,” he writes, “a quality of light that keeps the hard splendor of the world before us in high relief.” Because he walks more than 1200 miles each year through this unforgiving desert, Mike knows the terrain as well as anyone, describing it with affection while lacing it with a stiff dose of reality.

Back to the garden. In the Great Basin, planting a garden turns out to be much easier than sustaining a garden until harvest time. But Mike has promised Hannah, age eight, and Caroline, age four and a half, that they can become successful farmers. What happens that summer is a hilarious foray into the competing arenas of horticulture and predator control. First, a gang of kangaroo rats discovers the tiny seeds, then a hoard of white-tailed antelope squirrels invades the Branch’s yard, soon to be followed by a mob of California ground squirrels. With each encroachment, Mike investigates the physical attributes of the invaders and then plans their demise. He shares the science and then admits his hominid inability to cope. By the time of the fourth replanting of the girls’ garden, he resorts to coyote urine. Not a good idea, as it turns out!

Other Raising Wild essays are just as informative and just as funny. Like the one describing Mike and Eryn’s decision to begin a family, or the one about Thanksgiving turkeys, or the one when the girls joyously sing “The Hills Are Alive.” But there are serious undertones, too. Fire is always a danger, and isolation leads to problems. Meanwhile, Mike always conveys a thoughtful gloss on whatever he sees or whatever his family might be experiencing. How to be a good father, an effective parent, and loving spouse, is always at the forefront of his musings, as is an ongoing contemplation of how to live well in harmony with the land.

The last essay, “The V.E.C.T.O.R.L.O.S.S. Project,” imagines re-mapping the world so that its landscape speaks to the significance of stories. It suggests a fictionalized endeavor, rather like DNA mapping, of layering the psychological topography as well as the physical terrain onto any given locale. This somber yet playful blend of people with place is exactly what Mike accomplishes in Raising Wild. He tells personal stories that bring familiarity to an unfamiliar land, family anecdotes that make the juniper, the bitterbrush, and the sage seem accessible after all.

A disclaimer: I’ve known Mike Branch for thirty years and his wife Eryn for more than twenty. I first met one of his daughters in a black-and-white ultrasound photo that looked rather like a pimento-filled olive (Mike’s words, not mine). Raising Wild sounds just like its author—smart, knowledgeable, witty, a voice to savor and enjoy.   – Ann Ronald 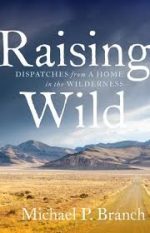 Ann Ronald is a retired English professor from the University of Nevada, Reno. Author of dozens of reviews, she’s also written a number of books about the American West. They include literary studies such as The New West of Edward Abby and Reader of the Purple Sage, cultural studies such as GhostWest and Oh, Give Me a Home, and nature writing such as Earthtones: A Nevada Album. Her latest is a work of fiction, Friendly Fallout 1953. Since retiring, she’s been reading vociferously, so “Bookin’ With Sunny” is giving her a wonderful opportunity to share thoughts about her favorite new discoveries.
More from this reviewer
PrevBronx Requiem at one’s Beck and call
Monument RoadNext