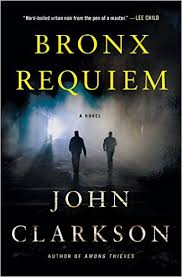 How much time do we have for reading? Is page count important? No chores to do? Home from work or do we wait for weekends? If you are reading John Clarkson, it’s not going to matter. From his prologue’s first sentence: “James Beck had about ten seconds before bones broke and blood hit the floor,” to the last sentence on page 388, “It’s finally over,” I’d estimate, even with minor spouse, kid, or pet distractions, reading Bronx Requiem might take maybe a couple of hours, max.

So what’s a nice girl like me doing in a book like this? Having one helluva lot of fun, chewing my nails and wondering what my favorite Robin Hood of the hoods is going to do next. Clarkson writes a fast-paced, intricately plotted novel about bad guys vs. sort-of–good/bad guys in and around the darker neighborhoods of New York City boroughs.

James Beck, tried and jailed for a cop killing he did not commit, owes his sanity and ability to have survived incarceration to fellow inmate Packy Johnson. By the time pal Packy is paroled, Beck, with his sentence overturned, has been out of prison for some time and is looking forward to helping his friend secure a life on the outside. But within the first twenty-four hours of Packy’s parole, he is brutally beaten and shot to death. Beck is devastated and vows to avenge what first appears to be a senseless act of brutality. Appearances can be deceiving, and in Beck’s life, they usually are.

Beck lives in a refurbished bar in the Red Hook neighborhood of Brooklyn with his band of ex-cons (think Robin Hood’s Merry Men) and others who value Beck’s efforts to make life easier for those who have been behind bars. Bronx Requiem introduces us early on to a possible new member of Beck’s crew. For the uninitiated, “crew” is the underworld’s word for “staff.” Helping first to coordinate Packy’s parole is Parole Officer Walter Ferguson, who, following Packy’s murder, helps Beck to uncover what is behind the brutal killing.

All Requiem characters begin to make sense as each one’s involvement leads to another. Clarkson’s plot is a bit of a shell game – now you see it, now you don’t. Center stage is Packy’s daughter, a young girl he has not seen since she was a child and who is now under the control of a well-known and brutal pimp, Derrick, who has his own vile crew planted throughout the Bronx. Packy’s daughter Amelia Johnson, known as Princess, is, prostitute or not, a most sympathetic character and when she finally finds the courage to leave Derrick, she doubles down by killing him.

As much as I am not keen on blood and guts, and there is plenty of that in Requiem (almost exquisitely painful), it is Clarkson’s treatment of the women in his stories that captures my attention. From Amelia’s hard-as-nails grandmother to a barmaid willing to serve Beck kindness as well as liquor, and Amelia who is almost beyond redemption, almost, but not quite, Clarkson is the tough and pragmatic romantic, emphasis on pragmatic.

The multiple killings in Requiem leave a trail of blood covering a money trail leading to more hoods and eventually flowing all the way from Albany to the NYPD. Although the word entrepreneur is thankfully never used, the underground world involved in Packy’s death is a business, a very profitable business and one that Beck intends to shut down.   –  Sunny Solomon 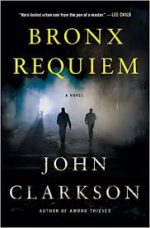 Sunny Solomon holds an MA in English/Creative Writing, San Francisco State University. She is a book reviewer for “The Clayton Pioneer” and her poetry and other writing has been published in literary journals, one chapbook, In the Company of Hope and the collection, Six Poets Sixty-six Poems. She was the happy manager of Bonanza Books, Clayton, CA and Clayton Books, Clayton, CA. She continues to moderate a thriving book club that survived the closure of the store from which it began. Sunny currently lives next to the Truckee in Reno, NV.
More from this reviewer
PrevHigh Noon
Raising WildNext