Home » Reviews » Between the World and Me

Between the World and Me 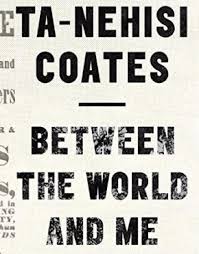 BETWEEN THE WORLD AND ME

Between the World and Me takes the form of a letter Ta-Nehisi Coates writes to his teenage son.  In a larger sense, the content is a communique to all black Americans, acknowledging the difficulties they must encounter in American society while urging pride in their history and their heritage. It is a warning, too, a cautionary tale about what will be forthcoming in an all too hostile world. In a still larger sense, Coates is writing to readers like me, white middle-class Americans who think we understand, who pretend empathy, who support the message that black lives matter, but who really haven’t a clue.

I often write a review without first-hand knowledge of a book’s milieu.  I’ve never lived in Elizabethan or Victorian England; I’ve never been to India or Pakistan; I’ve never been involved in murder or suffered armed conflict of any kind. Between the World and Me takes me to another unknown landscape, Ta-Nehisi Coates’ experiences first as a black boy growing up in gang-torn Baltimore, then as a black student attending Howard University and discovering an expanding world of black literature and history, finally as a black intellectual developing an increasingly significant narrative voice. It is a mark of Coates’ talent as a writer that his words have made me question my own critical credentials.  What credibility do I have to comment on his world?

Poignantly, he describes his boyhood fears, and how he coped.  He recalls beatings by his father, as his dad used a belt to prepare him for the vicissitudes of life.  He remembers the first time someone pointed a gun at his heart. He repeatedly underscores his youthful vulnerability, living in an amoral environment and trying to survive.  Even Howard University can’t obliterate those growing pains, although the world of ideas allowed him to escape.  It’s not classroom lectures that educate Ta-Nehisi Coates; however, it is the world of books.  In effect, he teaches himself, pursuing ideas from one volume to the next, debating with the authors, tentatively and then more forcefully translating their words while expanding his own self-awareness and self-esteem.

What makes it difficult for me to comment on this process is my ignorance of Coates’ discoveries.  I can neither put myself in his Baltimore shoes nor replicate the impact of being surrounded for the first time by intellectual peers whose skin resembles his own.  Even more foreign is the skein of historic events that threads through the narrative—the shooting of Treyvon Martin a, the choking of Eric Garner, and the equally improbable shooting of one of Coates’ college friends, an innocent victim who was targeted because of mistaken identity. The young man’s killer, a policeman, was never charged.  Relating what happened, Coates takes the reader into a world where black guilt is expected and presumed. “In America,” he writes, “it is traditional to destroy the black body—it is heritage.” (Coates’ italics) Through historic events, literary examples, and personal anecdotes, Coates backs up his words.

From my comfortable white prospect, I cannot argue with his conclusions.  Nor can I ever truly understand how a black man must deeply feel, coming of age while confronting such a devastating “heritage.”  I can, however, urge more people to read Between the World and Me.  For black readers, the book joins a long list of similarly clear-headed books by an insightful black writer. For white readers, Between the World and Me will disrupt your comfort zone in profound and provocative ways.  While I cannot presume to explicate all the book’s complexities, I can say that Ta-Nehisi Coates words should be read by us all, and shouldn’t be forgotten.   –  Ann Ronald

Also available by Ta-Nehisi Coates: The Beautiful Struggle: A Father, Two Sons, and an Unlikely Road to Manhood; Black Panther, a Nation Under our Feet. 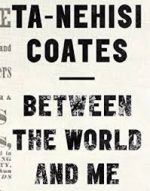 Ann Ronald is a retired English professor from the University of Nevada, Reno. Author of dozens of reviews, she’s also written a number of books about the American West. They include literary studies such as The New West of Edward Abby and Reader of the Purple Sage, cultural studies such as GhostWest and Oh, Give Me a Home, and nature writing such as Earthtones: A Nevada Album. Her latest is a work of fiction, Friendly Fallout 1953. Since retiring, she’s been reading vociferously, so “Bookin’ With Sunny” is giving her a wonderful opportunity to share thoughts about her favorite new discoveries.
More from this reviewer
PrevMonument Road
Old Age: A Beginner’s GuideNext