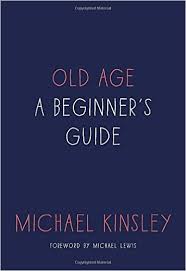 Although Old Age is tangentially about death and dying, it’s humorous, engaging, and rejecting of the customary platitudes. Kinsley has now had Parkinson’s Disease (PD) for nearly twenty-five years, so the death and dying aspect of his book has a sharpness and urgency for him far in excess of what I’m personally experiencing although I am older than he is by nearly a decade. Our deaths are equally inevitable but his, barring accidents, has a more focused certainty, or at least it seems that way to me. Nevertheless, I get what he’s writing about, particularly when I slink out of bed in the morning creaking, creeping, groaning, and hunting once again for my glasses and cell phone.

Old Age is a short book of essays. Some are personal. Some are more general, even moral in subject and tone. They also have a tongue-in-cheek and cheeky quality to them exemplified by one of his favorite quotes: “a gaffe is when a politician tells the truth.” When not writing about old age, Kinsley is a witty political journalist. In 2002 he underwent deep brain stimulation surgery to relieve some of his PD symptoms. On coming out of anesthesia, his first words were: “Well, of course, when you cut taxes, government revenues go up. Why couldn’t I see that before?”

He was diagnosed with PD when he was only forty-two. He apparently spent no time pondering the unfairness of life but rather went into denial for about eight years—an understandable reaction. Even while in denial he began telling some close friends and family about his condition. More importantly he began studying the progressive, degenerative nature of PD. His acceptance of its inevitability was slow and occurred in phases over the eight years. He quickly learned about its slow impacts on his physical activities. Only much later did he discover, to his dismay and more denial, that PD is accompanied by dementia.

If dementia is his lot, his prose, his analytical powers, and his vocabulary are all pretty amazing nearly twenty-five years later. If he still writes as brilliantly as he does in this 2016 book what possibly can he have lost to his disease? He broaches aspects of this question head-on, but I’m not going to give away his answers. He does, however, frame them humorously and within a conceptual framework that he calls “competitive cognition.”

In his first essay, Kinsley claims that this book is not primarily about his PD. instead he intends to use his PD and the inevitability of death, both his and ours, as excuses to muse about, make wry remarks about, and to sometimes harangue the members of the  “boomer generation” (born 1946-64) about its dubious social contributions and reputations. His concern with the boomers makes this a serious book, even though the seriousness is directed at a whole generation’s mortality and questionable legacy (not his word).  As a member of the boomer generation he lands heavily on his cohort for its lamentable impact on the world, for its responsibility for the poor fiscal health of the U.S and for its pervasive addiction to credit.

He doesn’t bemoan the bad hand that fate has dealt him. Nor does he have any illusions about the impact of his journalistic writings beyond the moment. He avoids the heaviness that often accompanies death and dying books. Old Age is no happy picnic but neither is it a greasy corn dog.   –  Neal Ferguson 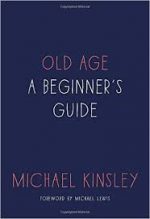 Neal Ferguson is a self described Anglo-phile. After studying for a PhD in British history and doing research for a year in various British archives, he came to the University of Nevada in 1970 to teach. Soon he found himself in administration where he remained until 2003. After returning to full-time teaching a decade ago, he decided to concentrate his teaching energies on Medieval British history and various global aspects of World War II. Dedicated to Ambrose Bierce’s proclamation that the purpose of war is to teach Americans geography, Neal insists that his students accompany him (in class) to sundry east European rivers and steppes, African deserts and jungles, south-east Asian mountain ranges and peninsulas, and small islands and coral reefs in the Pacific. Currently he is writing a book about the ups and downs of General Douglas MacArthur’s military reputation.
More from this reviewer
PrevBetween the World and Me
Hungry Heart, A memoir of consuming beautyNext