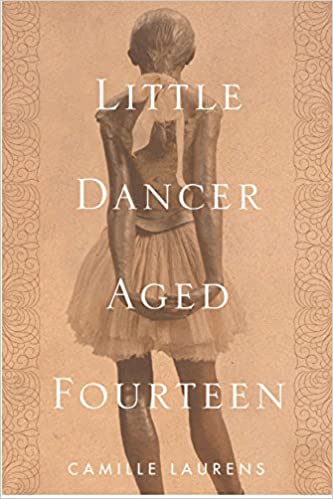 When I finished reading and reviewing Elizabeth Kostova’s The Swan Thieves, I remembered I had another unread Sunny book on my shelf that also probed the nature of artistic achievement and examined the genius of an Impressionist painter and sculptor often mentioned in Kostova’s novel. Camille Laurens’ Little Dancer Aged Fourteen looks at the work of Edgar Degas and most specifically considers his famous (infamous?) sculpture, “Little Dancer Aged Fourteen.” Laurens unearths every scrap of information she can find about his model, situating the young girl in Degas’ artistic world and in the unsavory counter-world in which she surely lived.

Not much is known about Marie Genevieve van Goethem. Her mother was a laundress, her father was absent, she had two sisters, and she and her younger sister were employed at the Paris Opera as bit-part ballet dancers who filled in the background. Such young girls were called “Rats;” most could neither read nor write; many earned additional money by modeling for various Impressionist artists; some became courtesans as they aged or fell into prostitution. Marie, the subject of countless sketches, a few paintings, and “Little Dancer Aged Fourteen,” modeled for Degas for a few years. Once she was a little older, she lost her modeling job and also her meager position at the Opera. At that point, her story is lost, too. Laurens, who investigates every research possibility she can, learns nothing more.

She laughs at herself as her brief study draws to a close. “I am having a hard time ending this book,” she writes, “because I’m having a hard time letting Marie go.” Then she confesses, “I’m sorry to leave my subject; it’s become an obsession. I can’t stop thinking about this character.” Laurens even calls her “my little dancer.” That’s when Kostova’s novel and Laurens’ narrative study coalesced for me. Obsessions lie at the heart of both books.

I was interested, too, in thinking about their dual takes on French Impressionism.  I didn’t know that Edgar Degas actually disliked the term. He wanted his work and that of his group of fellow artists—Monet, Renoir, Cezanne, Morisot, Sisley, and Pissarro—to be called the “Intransigents,” referring more to their upheaval of French painting norms rather than to their impressionistic styles. From Laurens, I learned even more about what the Impressionists said about each other. She quotes freely from Degas’ contemporaries as she attempts to reconstruct his studio and his relationships with his models. (Unlike many of his peers, Degas never seduced his models. Indeed, he seems to have been a misogynist to the core.)

And that misogyny undoubtedly led to his portrayal of “Little Dancer Aged Fourteen.” Sculpted in wax, wearing a tutu and a horsehair wig, caged in glass, posed awkwardly, with a disproportionate body and a heavy (some say ugly) face, she was unlike any sculpture familiar to Degas’ French museum-goers. I don’t want to depict her in any more detail because that detracts from the main reason to read Laurens’ book. She circles around the sculpture herself; she cites dozens of first-hand critiques; she follows the progression as critics come to see more and more grace in the young dancer’s graceless pose.

Near the end of her study, Laurens notes several novels that have been written about Marie van Goethem. One of them, I reviewed for “Bookin’ with Sunny” many years ago. Laurens dislikes Cathy Marie Buchanan’s The Painted Girls, which fictionalizes the lives of the two younger van Goethem sisters. I liked it, perhaps because I enjoy imagination as much as archives. In her own way, so does Laurens, as she works to exhume the unfortunate Little Dancer Aged Fourteen. –  Ann Ronald

Also available by Camille Laurens: Who You Think I Am; In His Arms; Girl; Index. 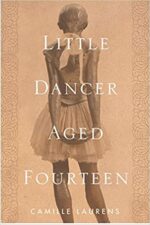 Ann Ronald is a retired English professor from the University of Nevada, Reno. Author of dozens of reviews, she’s also written a number of books about the American West. They include literary studies such as The New West of Edward Abby and Reader of the Purple Sage, cultural studies such as GhostWest and Oh, Give Me a Home, and nature writing such as Earthtones: A Nevada Album. Her latest is a work of fiction, Friendly Fallout 1953. Since retiring, she’s been reading vociferously, so “Bookin’ With Sunny” is giving her a wonderful opportunity to share thoughts about her favorite new discoveries.
More from this reviewer
PrevPayback
Enchantress of NumbersNext