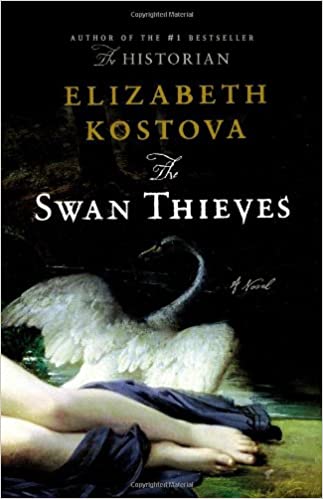 The Swan Thieves, a story of obsession by a cast of characters that only Elizabeth Kostova could create. It is a literary collage that you will not want to miss.

Elizabeth Kostova’s novel, The Swan Thieves, took my understanding of “obsession” to a new level. Every character seemed to be obsessed with someone or something. A few of the obsessions were nuanced, but most were forcefully expressed. The result was a layered effect, almost as if a collage of silhouettes were carefully pieced together.  Collage, indeed, is the right word, for the entire novel centers on art as well as obsession.

The most obsessed character is a talented artist, Robert Oliver, who has just been admitted to a psychiatric facility because he tried to stab a painting in the National Gallery of Art. No one knows why, and Robert refuses to talk. Throughout The Swan Thieves, he says nothing more than a single line, “I did it for her.” Thus, it becomes the task of the other characters to piece together Robert’s obsession—the reasons for his neurosis and his breakdown.

Andrew Marlowe is Robert’s attending psychiatrist at Goldengrove. Needless to say, it is difficult to diagnose and then treat a patient who will not say a word. Marlowe connects on one level, however, because he too has artistic inclinations. He appreciates Robert’s genius and happily delves into the tacit man’s artistic temperament. You might say, in fact, that Marlowe becomes obsessed with Robert’s case and with solving the mystery of Robert’s obsession. To do so, Marlowe enlists the help of two women who have loved the artist—his wife and his recent lover. Marlowe’s interviews with each of them flesh out Robert’s past and give the reader a fuller understanding of how and why his obsession has driven him mad.

Robert’s madness is exacerbated by an aging collection of letters that he fingers constantly. Written in the late nineteenth century, in French, the correspondence displays its own set of obsessions, mirroring Robert’s and, finally, mirroring Marlowe’s. Here is where the strength of The Swan Thieves shows itself. In Kostova’s artistic design, the reverberations and parallels grow into the remarkable silhouetted collage I mentioned at the outset. At first, I was bothered by the repetitions, but soon I was totally caught by the artistry. This is a long novel, nearly six hundred pages, and I read it in just three days!

Earlier in “Bookin’ with Sunny,” I reviewed another Elizabeth Kostova novel, The Shadow Land. I raved about it, too, especially about its “skein of disparate threads that all connect,” exactly the strength of The Swan Thieves. I also raved about its “pictorial imagination,” which is even stronger in The Swan Thieves. Kostova has a keen eye for detail, for shapes and colors, for the artistry in every scene and in every depiction of character. She uses words instead of a paintbrush, but the effect is the same. The reader steps inside the collage, joins with the characters and their artistic endeavors. I might add that everyone seems to be a painter in this novel, so artistry is very much at the forefront. Artistry, in fact, is everyone’s obsession.  –  Ann Ronald

Also available by Elizabeth Kostova: The Historian, The Shadow Land. 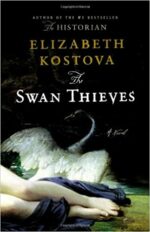 Ann Ronald is a retired English professor from the University of Nevada, Reno. Author of dozens of reviews, she’s also written a number of books about the American West. They include literary studies such as The New West of Edward Abby and Reader of the Purple Sage, cultural studies such as GhostWest and Oh, Give Me a Home, and nature writing such as Earthtones: A Nevada Album. Her latest is a work of fiction, Friendly Fallout 1953. Since retiring, she’s been reading vociferously, so “Bookin’ With Sunny” is giving her a wonderful opportunity to share thoughts about her favorite new discoveries.
More from this reviewer
PrevA Promised Land
PaybackNext