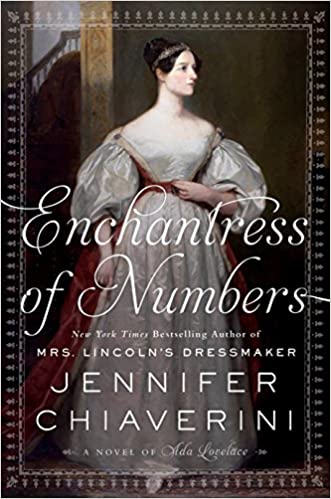 Lately, I seem to be reading novels with similar origins, fictional renditions that spring from the lives of real people. I found Jennifer Chiaverini’s Enchantress of Numbers to be one of the more provocative ones. The enchantress is Ada Byron King, Countess of Lovelace, the only legitimate child of the notorious and noteworthy British poet, George Gordon, Lord Byron. I knew he had a daughter, but I never learned much about her until now. It turns out that her accomplishments were nearly as remarkable as her father’s.

When Ada was only seven weeks old, her mother fled from the tumultuous marriage, taking her newborn child to the safety of Ada’s grandparents’ home. Enchantress of Numbers begins in chaos, as Ada reimagines her parents’ courtship and the subsequent upheaval. Lord Byron’s instability and unfaithfulness not only caused the marital breakup but also severely impacted Ada’s childhood. Fearful that her daughter would show the same fitful capriciousness, Lady Byron raised Ada with an iron hand. Wanting especially to quell any sign of creativity or imagination, she forbade fairy tales and poetry, allowing only musical and mathematical studies for the little girl.

Reading about Ada’s mother’s doctrinaire approach to childrearing was excruciating to me, as was watching the girl being constantly watched! Lady Byron, several of her spinster friends, her tutors, and a phrenologist “doctor” spied on the precocious Ada during most of her waking hours. It’s no wonder she was a bit neurotic, though, of course, her mother blamed any misadventure on bad blood rather than the strictness of her upbringing or her mother’s own not insignificant physical and mental neuroses. Lady Byron’s parents gave Ada a measure of stability and love, but nonetheless, it’s a wonder she grew into a bright and talented young lady.

Ada’s adulthood was truly remarkable. She studied mathematics and scientific methods in more depth than that experienced by most Victorian women. Further, her mother’s family was well-to-do, so their social circles included people of political and intellectual accomplishment. Lord Melbourne, the prime minister, for example, was Ada’s mother’s cousin; Ada was presented at court and was invited to countless posh parties after she debuted. Most happily for Ada, she met other like-minded people, men and women as mathematically gifted and as scientifically curious as Ada had become. Even though Lady Byron had tried to quell Ada’s imagination, she hadn’t quite succeeded, for Ada approached science with immense creativity and insightful projections about what might be possible.

Two people were especially influential on Ada. One was Charles Babbage, noted for his work inventing what he called the “difference engine,” the first mechanical computer. The complicated device was never finished, but Babbage’s concept intrigued Ada. After attending many salons at Babbage’s home, she worked with the genius and offered her own theoretical enhancements. Ada was encouraged by Mary Somerville, a Scottish polymath who was, until Ada, the most successful woman mathematician of her age (though the sexist Royal Society never formally recognized her accomplishments). Mrs. Somerville mentored the talented Ada and helped her navigate the Victorian strictures against scientific women.

I most enjoyed learning about their trials and tribulations. In fact, when Ada published a major treatise explaining the mathematical potential of Babbage’s machine, she did so under her initials, A.A.L. Her work received major scientific accolades and praise. Until the men learned the author was Lord Byron’s daughter! After that, Ada’s theoretical achievements were totally ignored. History now considers her work to be that of the first computer programmer, but in her time, Ada received little scientific recognition.

Enchantress of Numbers details more of Ada’s life than just her scientific frustrations, however. It also narrates her marriage, the birth of her three children, and her failing health. I found Chiaverini’s novel to be a successful and sweeping view of upper-class Victorian life, when women were expected to marry appropriately, not to pursue scientific careers. On the other hand, the mid-1800s saw the scientific revolution steaming ahead. The enchanting Countess of Lovelace played a role in those wondrous years of discovery. Enchantress of Numbers gives credit to a brilliant woman who never wanted to be known just as “the poet’s daughter.”  –  Ann Ronald 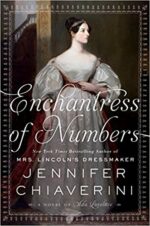 Ann Ronald is a retired English professor from the University of Nevada, Reno. Author of dozens of reviews, she’s also written a number of books about the American West. They include literary studies such as The New West of Edward Abby and Reader of the Purple Sage, cultural studies such as GhostWest and Oh, Give Me a Home, and nature writing such as Earthtones: A Nevada Album. Her latest is a work of fiction, Friendly Fallout 1953. Since retiring, she’s been reading vociferously, so “Bookin’ With Sunny” is giving her a wonderful opportunity to share thoughts about her favorite new discoveries.
More from this reviewer
PrevLittle Dancer Aged Fourteen
VoxNext