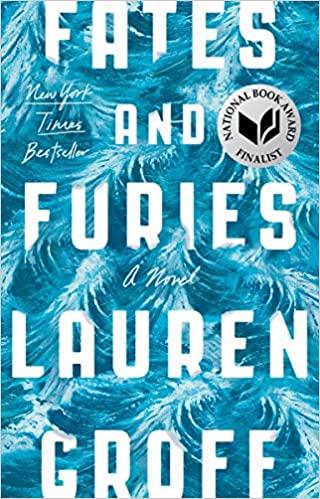 In Fates and Furies, Lauren Groff proposes a unique way of looking at a relationship. The first half of Fates and Furies, titled “Fates,” examines the marriage of Lancelot (known as “Lotto” to his friends) and Mathilde mainly from Lotto’s point of view. The second half, titled “Furies,” revisits the same marriage, many of the same events plus some new revelations, mainly from Mathilde’s point of view. Such double envisioning results in a three-dimensional perspective on their lust and their love, their misperceptions and their misunderstandings, the subtle ambiances of a long and enduring marriage.

Groff presents Lotto’s half of Fates and Furies in a rather unique way. The reader encounters him at parties, a string of parties that lasts throughout his life. There are asides, his memories and those of his friends and acquaintances, but the essential overview of his marriage with Mathilde comes during festive occasions. “You could string together the parties Lotto and Mathilde had been to like a necklace,” Groff writes, “and you would have their marriage in miniature.”

In contrast, Mathilde’s half of the novel is more internalized. “Great swaths of her life were white space to her husband. What she did not tell him balanced neatly with what she did. Still, there are untruths made of words and untruths made of silences, and Mathilde had only ever lied to Lotto in what she never said.” Those silences are gradually revealed to the reader, though never to Lotto and never to the other characters in the novel. Mathilde remains an enigma to almost everyone, but the reader comes to fully understand the mysteries that have formed her elusive personality.

Fates and Furies begins on the day of Lotto and Mathilde’s wedding, an elopement that occurred only two weeks after they met. Naturally, we see that day in dual overtones—a couple ecstatically in love, but a couple already hiding secrets about their families and their pasts. Some of those secrets only surface near the novel’s close, and some neither husband nor wife ever learns about the other. As a reviewer, I try never to reveal a novel’s confidences. Suffice to say, Lotto’s and Mathilde’s secrets are complicated and, in fascinating ways, help make sense of their adult personalities. What each brings to their marriage grows directly out of his and her complicated pasts.

Lauren Groff writes extremely well, with a real gift for subtlety. She invites her readers to think in directions both deep and wide. She also fills Fates and Furies with literary allusions. Most of her characters bear names suggestive of previous author’s creations. Thinking about a prior Lancelot and this one’s high school girlfriend Gwennie, for example, adds layers to what happens in Groff’s very fine modern Camelot (my overly transparent description of Lotto and Mathilde’s marriage, not Groff’s).

If I have a complaint about this excellent tale, it is a curmudgeonly one. Fates and Furies is filled with gratuitous sex. At times I thought the kinky interactions were unnecessarily overdone. Although they are a key part of this very sexy novel, I myself didn’t need so many extended boudoir scenes. That said, I still recommend Fates and Furies. I wanted Lotto and Mathilde to be better than they were, I wanted to like them more than I did, but I was absolutely intrigued by what made their marriage hold together. And I was particularly engrossed by Groff’s masterful fictional presentation and literary design.  – Ann Ronald – 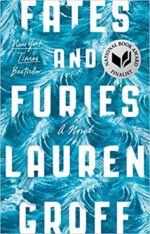 Ann Ronald is a retired English professor from the University of Nevada, Reno. Author of dozens of reviews, she’s also written a number of books about the American West. They include literary studies such as The New West of Edward Abby and Reader of the Purple Sage, cultural studies such as GhostWest and Oh, Give Me a Home, and nature writing such as Earthtones: A Nevada Album. Her latest is a work of fiction, Friendly Fallout 1953. Since retiring, she’s been reading vociferously, so “Bookin’ With Sunny” is giving her a wonderful opportunity to share thoughts about her favorite new discoveries.
More from this reviewer
PrevMagpie Murders
V2Next