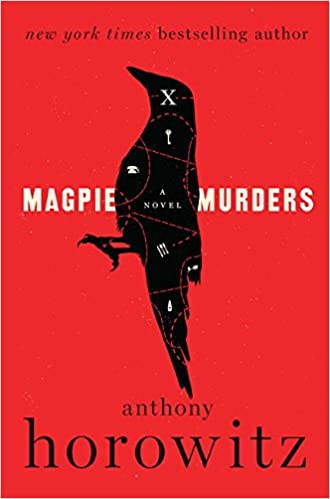 The Magpie Murders is Deliciously British! Anthony Horowitz’s mystery is set in a circumscribed Somerset village populated by a quarrelsome set of eccentric miscreants. The novel opens with a funeral witnessed by seven magpies. Spying the birds, one of the mourners recalls an old nursery rhyme: “Seven for a secret,/ Never to be told.” And so multiple secrets begin to unfold.

Ostensibly, Magpie Murders is the ninth in a fictional series written by Alan Conway and featuring Atticus Pund, who acts as if he had just stepped out of a novel by Agatha Christie or Dorothy Sayers or P. D. James. Deliciously British, indeed, when a second sudden death occurs in the same Saxby-on-Avon manor house, and Atticus Pűnd is called upon to assist the police with their investigations. Conway’s Magpie Murders turns out to be a manuscript inside the pages of Horowitz’s novel, Magpie Murders.

Alongside the reader, Conway’s editor Susan Ryeland is reading, too. And much to her surprise, and mine, the final pages are missing. Just when Pűnd is ready to reveal whodunnit, the manuscript ends. So, Susan Ryeland must solve the mystery of the lost pages before Cloverleaf Books can publish their best-selling author’s latest rendition of Atticus Pűnd. Finding those pages turns out to be no easy feat, however, because almost immediately, the fictional author Alan Conway dies under mysterious circumstances. Whodunnit? That’s what Susan now must discover, in parallel with her search for the manuscript’s finale.

As you well might imagine, Susan’s investigation parallels more than her quest for the missing pages. It also assumes overtones of Pund’s inquiries. Many of the people Susan encounters remind her of characters in the Pűnd novels. Before long, the reader sees the associations, too. The overall effect is ratiocination at its very best. I not only enjoyed Susan’s logic, but I loved her comments about the art of writing effective mystery series. Along with her investigations, we hear a continuous riff on authors and editors and the all-consuming writing process. Anyone who enjoys a good British mystery will truly appreciate Susan’s observations and the way they reflect and reinforce the problems she is trying to solve.

In many ways, Horowitz’s novel is a genuine tour de force. The framing is ingenious, the asides provocative, and the mysteries themselves astutely complex. The echoes and reverberations, both obvious and subtle, are never awkward or heavy-handed. I’m happy to see that a sequel with similar complexities is in the offing. Moonflower Murders is scheduled for publication in November 2020. Apparently, it, too, will embroil Susan Ryeland in another plot that echoes a different Alan Conway/Atticus Pűnd mystery. I expect Moonflower Murders will have just as many witty asides and just as much British appeal. Magpie Murders deserves real accolades for a mystery well done. I recommend it highly, very highly. What a fun, fun esoteric, and delicious read!  – Ann Ronald – 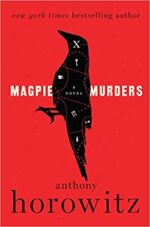 Ann Ronald is a retired English professor from the University of Nevada, Reno. Author of dozens of reviews, she’s also written a number of books about the American West. They include literary studies such as The New West of Edward Abby and Reader of the Purple Sage, cultural studies such as GhostWest and Oh, Give Me a Home, and nature writing such as Earthtones: A Nevada Album. Her latest is a work of fiction, Friendly Fallout 1953. Since retiring, she’s been reading vociferously, so “Bookin’ With Sunny” is giving her a wonderful opportunity to share thoughts about her favorite new discoveries.
More from this reviewer
PrevThe Prince of Frogtown
Fates and FuriesNext