Home » Reviews » The Prince of Frogtown

The Prince of Frogtown 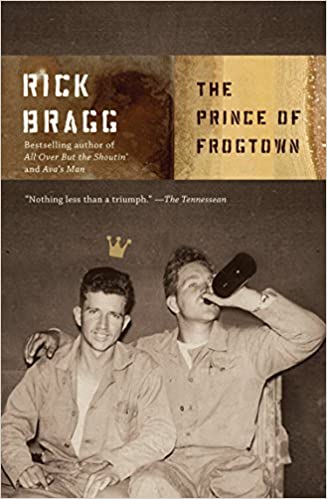 THE PRINCE OF FROGTOWN

The Prince of Frogtown is Pulitzer Prize-winning Rick Bragg’s third memoir. The first, All Over But the Shoutin‘, was written in praise of his mother, who mostly raised Bragg and his two brothers on her own, especially during the difficult and painful times his father chose to be a part of their lives. His second memoir, Ava’s Man, was written as a tribute to his father’s mother. Prince of Frogtown is not a book in praise of his father. How do you praise a mostly absent, often violent, and basically, alcoholic father?  The author has written a book not only in search of his father but in search of fatherhood itself.

In his prologue, Bragg asks one question and answers another: “I don’t know what kind of man I turned out to be, but I was good at being a boy.” As it turns out, Bragg remained a boy right into his adulthood, right up to the time (in his mid-forties) when he met a woman who turned his life upside down. She was a keeper and came with one young son still at home. Bragg began his journey to reclaim his father when he“got a boy of my own.”

Every chapter in the book has a section entitled “The Boy.” It’s like a seed that gets watered with each chapter until Rick Bragg, his father, Charles Bragg, and his own “boy” are full-grown. The reader may wonder why Bragg never gave his stepson’s name as the title for these sections. The answer comes with a second look at the book’s prologue. Bragg’s father never called him by name, not even “son,” simply, “boy.”  Bragg explains: “It’s one of those words that bind you to someone strong as nylon cord if you say it right.”  The reader knows, even then, that Bragg’s father said it right.

Bragg, like his father, grew up in Jacksonville, a mill town in northeast Alabama. By the end of the book, we know the layout of this small southern town on both sides of the tracks. We know its heroes, its villains, and its scoundrels. Charles Bragg was a bit of all of them, and it is the telling of his story that captures the reader’s heart and attention. As Rick Bragg interviews his father’s friends, relatives, and acquaintances, it reads like folktales come alive. He also brings to life the story of the Alabamans who came down from Appalachia’s foothills to the mill towns that offered work under conditions just short of slavery. This is storytelling at its intimate and haunting best.

As Bragg opens himself to his stepson’s presence, he also opens himself to a more realistic presence of his father. The worst of parents don’t need our forgiveness, but they need our understanding if we are to understand ourselves. Bragg comes to understand that his stepson wants only to be his son, just as he, himself, wanted to be his father’s son. His understanding unlocks the door to a powerful and enduring love.  – Sunny Solomon –

Also available by Rick Bragg: All Over but the Shoutin’; Ava’s Man; The Best Cook in the World; My Southern Journey; Where I Come From; The Most They Ever Had; Jerry Lee Lewis, His Own Story; I Am a Soldier, Too; Somebody Told Me; Redbird, Memories from the South; The Game, In the Press Box at the Iron Bowl; Our Prince of Scribes; What Stands in a Storm; Southern by the Grace of God; The Speckled Beauty. 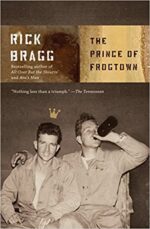 Sunny Solomon holds an MA in English/Creative Writing, San Francisco State University. She is a book reviewer for “The Clayton Pioneer” and her poetry and other writing has been published in literary journals, one chapbook, In the Company of Hope and the collection, Six Poets Sixty-six Poems. She was the happy manager of Bonanza Books, Clayton, CA and Clayton Books, Clayton, CA. She continues to moderate a thriving book club that survived the closure of the store from which it began. Sunny currently lives next to the Truckee in Reno, NV.
More from this reviewer
PrevCrossings
Magpie MurdersNext