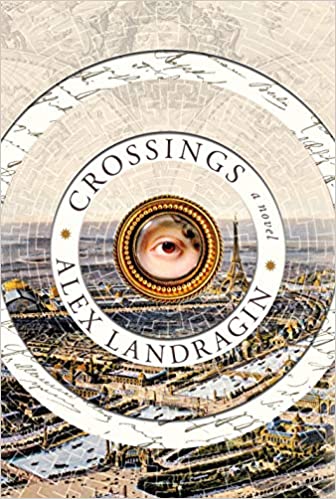 The best way to read Alix Landragin‘s novel, Crossings, is with a healthy dose of Samuel Taylor Coleridge’s “willing suspension of disbelief.” As a matter of fact, one of the characters suggests that simply to be an actor in Crossings requires a “willing suspension of disbelief.” To enjoy this novel means you must at least accept the possibility of “crossings,” a kind of “metempsychosis of the living” where the soul and even the personality and life experiences of someone pass into the body of another.

To understand how this works in Crossings requires an examination of its structure. The novel begins with a Preface penned by a Parisian bookbinder who has acquired a manuscript comprised of three separate tales. He has been instructed not to read any of the pages, just to bind them exquisitely. He cannot resist the words, however, and thus Crossings begins. The first narrative, only four short chapters, is “The Education of a Monster,” ostensibly written by Charles Baudelaire. The second, “The City of Ghosts,” is a longer romance, a doomed liaison that takes place just as the Nazi occupation of France is getting underway. The final story, “Tales of the Albatross,” begins on a South Pacific island where metempsychosis is the law of the land. All that changes when a French sailing vessel arrives and the island’s isolation is shattered. Nearly half of Crossings is devoted to Alula’s seven lifetimes, showing how this islander’s multiple lives intersect with the stories previously told.

But wait! Crossings possesses a crossing structure, too. Recommended by the manuscript owner who sent the three tales to the bookbinder, this alternative design presents a concurrent way to access the metempsychosis experience. This narrative line begins on page 150, then proceeds to hopscotch through the book. At the end of each chapter, a page number sends the reader to a different chapter. Thus this story begins with the Nazi occupation, moves back to Baudelaire, moves on to Alula, back to Baudelaire, and so forth. I’m a conventional sort, so of course, I began on the first page of Crossings and read it sequentially. But after I finished, I traced the alternative design. Most intriguing, easy to follow, and every bit as satisfying. Rather more like solving a complicated puzzle successfully than reading a predictable text, but coherent, even so. It might be fun, I decided, to read Crossings this way at the outset. That’s for each reader to decide.

Ordinarily, I’m leery of fabulist novels, but Crossings surprised me. I enjoyed suspending my disbelief. The three tales are thoroughly engaging, with complicated characters who traverse a span of history that brings to life a series of complex milieus. Racism and colonialism play major roles, as does war and its irrational violence. The obsessiveness of love recurs often, with varying outcomes. Some of the crossings happened suddenly, odd choices made at the last minute when a character realizes he or she must immediately transmogrify into the body of someone new. Sometimes they’re plotted with more cunning and finesse. Always they move the narratives along in startling ways. Indeed, this book is another page-turner, multifaceted, puzzling, but generally satisfying.

If you can suspend your disbelief, I recommend Crossings. Enjoyable, even tantalizing, in a suspended sort of way.   –  Ann Ronald  – 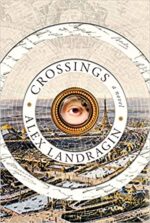 Ann Ronald is a retired English professor from the University of Nevada, Reno. Author of dozens of reviews, she’s also written a number of books about the American West. They include literary studies such as The New West of Edward Abby and Reader of the Purple Sage, cultural studies such as GhostWest and Oh, Give Me a Home, and nature writing such as Earthtones: A Nevada Album. Her latest is a work of fiction, Friendly Fallout 1953. Since retiring, she’s been reading vociferously, so “Bookin’ With Sunny” is giving her a wonderful opportunity to share thoughts about her favorite new discoveries.
More from this reviewer
PrevThe Last Secret
The Prince of FrogtownNext