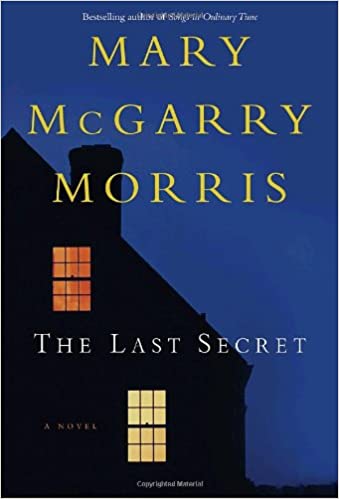 Secrets. Be honest, don’t we have a few things that, for whatever reason, we’ve never told another person? Well, Nora Trimble Hammond, the protagonist of Mary McGarry Morris‘s novel, The Last Secret, has a biggie. Nora actually has two secrets, both of which she’s relegated to the darkest recesses of her subconscious. Luckily for the reader, Nora’s first secret, the one about running away from home at age 17, on a drunken spree with 23-year-old Eddie Hawkins, is described in a prequel chapter. But the reader can trust Ms. Morris; the telling of the first secret only serves to stir the plot.

Morris is a master storyteller. She sets it up for us: a young, rebellious teenager makes a big mistake and becomes involved in a violent incident in which her boyfriend beats up a stranger they’d met in a bar. Nora Trimble, terrified and ashamed, runs away from both the scene of the violence and Eddie Hawkins.

Chapter one begins many years later with Nora all grown up, the mother of two teenagers and a pillar in her community. Nora Trimble, now married to Ken Hammond, whose brother runs the family-owned newspaper, begins to work at the newspaper, in addition to her charitable work at a home for battered women. The charity receives national attention in Newsweek. Included in the in-depth article is a picture of Nora Hammond.

Even before getting to the chapter where a much older and seedier Eddie Hawkins, clear across the country, scans through the magazine and happens upon and recognizes the picture of the upright and highly esteemed Mrs. Hammond, we know that Mrs. Hammond’s secret is about to surface.

What makes this novel a sharp cut above just another story of one person’s past closing in on an unsuspecting protagonist is Morris’s skill in developing her characters as they play out their scenes with uncomfortable realism. Morris has a keen sense of what makes us tick, and she doesn’t pull any punches. It takes more than Nora’s husband admitting an affair with his high school sweetheart and Eddie Hawkins’s smarmy reappearance to shake Nora. It isn’t until she confronts Hawkins at her own home and expresses her regret for whatever he’s gone through in the ensuing years, but reminds him that the act of violence had been his, “. . . that’s what really happened.” Hawkins’ reply is sadistically revealing: “What really happened was you split the f’ers skull in two. And then you took off running. And who ends up in shackles?”

Eddie’s not the only one in shackles. This is a tale of a past, a present, and a future, each in its own way is shackled to the other. Morris is uncompromising in presenting her characters with all their foibles. She doesn’t ask that we like all these people. She treats her characters even-handedly, and the fact that their behavior is often recognized as more than a little familiar, we care about them.

Nora’s tightly contained world comes apart. She has more than one disturbing secret, as does her husband. The town itself becomes a microcosm of the way we manage to live alongside the unspoken. Ms. Morris brings her novel to a horrific climax and then back down to earth where sides are taken, truths are believed or not, and resolution is achieved. Although the resolution is real, it does not bring about much change. Redemption can be most uncomfortable and ultimately arrives at a very high cost.

The Last Secret is a compelling and satisfying read.   – Sunny Solomon –

Also available by Mary McGarry Morris: Light from a Distant Star; The Lost Mother; A Hole in the Universe; Fiona Range; A Dangerous Woman; Vanished; Songs in Ordinary Time. 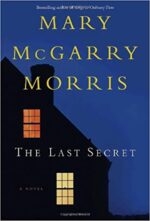 Sunny Solomon holds an MA in English/Creative Writing, San Francisco State University. She is a book reviewer for “The Clayton Pioneer” and her poetry and other writing has been published in literary journals, one chapbook, In the Company of Hope and the collection, Six Poets Sixty-six Poems. She was the happy manager of Bonanza Books, Clayton, CA and Clayton Books, Clayton, CA. She continues to moderate a thriving book club that survived the closure of the store from which it began. Sunny currently lives next to the Truckee in Reno, NV.
More from this reviewer
PrevThe Last Train to London
CrossingsNext