Home » Reviews » The Monsters of Templeton

The Monsters of Templeton 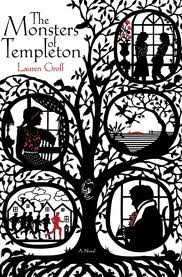 The Monsters of Templeton and everything else in between. This is reading bliss.

When I wrote this review in November of 2008, for the Clayton Pioneer, I declared Lauren Groff, the author of The Monsters of Templeton, The Most Wildly Imaginative Novelist of 2008. Monsters, Groff’s first novel, is a cornucopia of reading bliss, and I thought it wise to get that review posted on this website so that those of you unfamiliar with the author can whet your appetite before her new book, Delicate Edible Birds (nine short stories), comes out.

Monsters is a historical novel set in Cooperstown, New York. Well, not quite. Groff has borrowed from James Fenimore Cooper, the town’s namesake, and called her early American settlement, soon to be a village, and finally a full-fledged Baseball Hall of Fame city, Templeton, New York. It is also a modern novel, which opens when our heroine, Willie “Sunshine” Upton, an archeological doctoral student, returns home to Templeton after a disastrous love affair with her married dissertation advisor. Fresh from a dig in the frozen tundra of Alaska, she begins her story: “The day I returned to Templeton steeped in disgrace, the fifty-foot corpse of a monster surfaced in Lake Glimmerglass.”

But notice that Groff has titled her book, Monsters, plural. The corpse that surfaces on the day of Willie’s return is only one of many monsters inhabiting Groff’s story, some in the persona of secrets hidden for hundreds of years. The early settlers lived dangerous and daring lives beneath the surface, much like the mysterious monster. But the most important secret is the identification of Willie’s father. Up until the day Willie returns, her mother, Vivienne Upton, an almost-rehabilitated hippy, has told her daughter that she is the offspring of one of three men, all cohabitants of a vegetarian commune in the 1970s. Willie has been comfortable with this story for years, but now Vivienne has found Jesus and believes the truth shall set her free. Almost. The truth may set Willie free, but mom’s not giving her much help; instead, Vivienne trusts that her brilliant daughter, trained to dig for what is hidden, will unearth this fact as well.

Willie, a direct descendant of the founder of Templeton, has only one clue about her father’s identity and that is that he, too, is a very distant descendant of the same founding father. With the skill of a much older storyteller, Groff weaves the reader in and out of early America in central New York State. We recognize some of James Fenimore Cooper’s characters, which populate the tale, but the recognition is as skewed as Groff’s

rendering of these characters. Indeed, Groff creates her own unique American voice. Interwoven with the literary and social history is the relationship between Willie and her mother, both endearingly sympathetic characters; between Willie and a ghost, a long-time resident in her family home; Willie and Glimmerglass, the lake filled with a past as ancient and icy as the tundra she has just left; and finally, her relationship with a vivid cast of characters who are, with one exception, her fellow residents of wonderful Templeton.

Groff’s novel is packed with visual aids: family photographs, early American portraits, miniatures in oil and chalk, a photo of an easily recognized Cooperstown statue, a rendering of the Glimmerglass monster, and a half dozen family trees, each one reflecting the newest information gathered until the tree has a new branch. The Monsters of Templeton is Groff’s loving tribute to Cooperstown. In her acknowledgments she thanks her parents, “for their boundless love, support, and foresight for giving us such a gift of a hometown.

Of course, Willie finds her father. Not surprisingly, she finds herself. She, like Baum’s Dorothy, discovers that there really is no place like home, even if she must leave it again to finish her education. Readers will bring their own hometowns to this magical tale, and it’s almost guaranteed that each reader will claim a little bit of Templeton for themselves.  – Sunny Solomon

Sunny Solomon holds an MA in English/Creative Writing, San Francisco State University. She is a book reviewer for “The Clayton Pioneer” and her poetry and other writing has been published in literary journals, one chapbook, In the Company of Hope and the collection, Six Poets Sixty-six Poems. She was the happy manager of Bonanza Books, Clayton, CA and Clayton Books, Clayton, CA. She continues to moderate a thriving book club that survived the closure of the store from which it began. Sunny currently lives next to the Truckee in Reno, NV.
More from this reviewer
PrevSo Brave, Young and Handsome
The VagrantsNext