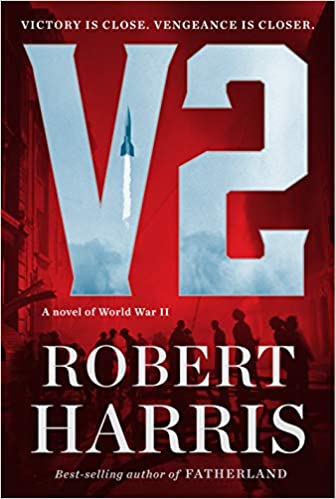 V2 is the newest addition to Robert Harris’s World War II thriller-novels.  His historical fiction is marked by scrupulous attention to historical details and context that, nevertheless, do not impede his inventing characters and situations and placing them in a gripping, imaginative story. V2 is set in the closing months of World War II as Nazi Germany continues its quest for a technological breakthrough that will allow it to pull the rat out of the hat, even as Soviet armies crush them from the East and as the Allies continue their bloody slog in the West.  Following the disastrous effort by the Allies to slice through the Netherlands into the heartland of Germany in September 1944, the Germans tightened control over the North Sea coast near the Hague. They used their bases there to begin launching several thousand V2 missiles at London and Antwerp, each traveling at three times the speed of sound and carrying a one-ton warhead.

V2 has two interwoven plots.  In German-occupied Netherlands, German rocket scientists, technicians, and Army and SS troops wrestle with the technical issues of launching the sophisticated weapon.  There, the intellectual, emotional, scientific, and military action centers on a thirty-two-year-old civilian rocket scientist, Dr. Rudi Graf (one of the novel’s protagonists).  Herr Professor Doctor Wernher von Braun (an actual historical figure) is his friend and a central figure in the story.  Graf is a technical wizard but has dangerous reservations about the weaponization of rockets; the dream of space flight has captivated him since the age of sixteen.

On the other side of the English Channel in Britain, the target of the V2s, intelligence offices, and the RAF struggle vainly to find and bomb the missiles’ mobile launch sites (not a spoiler).  A group of young female graduates from Cambridge and Oxford is assembled to apply their analytical and mathematical skills to locating the manufacturing, transportation, and launching venues of the V2s after their primary location at Peenemunde was discovered. Due to the intelligence efforts of one of the novel’s protagonists, Angela Kay Caton-Walsh, that location was partially destroyed. Soon, Caton-Walsh volunteers her talents to a more dangerous mission in Belgium where the British have set up some advanced radar equipment that might permit them to reverse-engineer the parabolic flights of the V2s as they speed from the Netherlands to London, flight time four-plus minutes. Then, their launch sites might be attacked by the RAF.

Harris’s V2 is delightful to read.  I found it easy to empathize with the different personalities and motives of each of the protagonists. Both, to some degree, struggle with the omnipresent human dilemma of having to make life-changing decisions with imperfect information.  Their struggles and choices propel the story, not the technical or historical details.  The dialog is crisp. So, too, is the pace of the novel. Although I do not get obsessed with the technical details of WW II weapons, I found that Harris provides an impressive number of them.  If I have a cavil, it is that the British are portrayed as a little too morally unambiguous while the SS occupy, deservedly, the “easy-to-hate” moral swamp. The one SS officer who evades the stereotype is . . . .  Sorry, that would be a spoiler.  – Neal Ferguson – 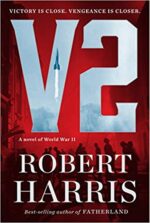 Neal Ferguson is a self described Anglo-phile. After studying for a PhD in British history and doing research for a year in various British archives, he came to the University of Nevada in 1970 to teach. Soon he found himself in administration where he remained until 2003. After returning to full-time teaching a decade ago, he decided to concentrate his teaching energies on Medieval British history and various global aspects of World War II. Dedicated to Ambrose Bierce’s proclamation that the purpose of war is to teach Americans geography, Neal insists that his students accompany him (in class) to sundry east European rivers and steppes, African deserts and jungles, south-east Asian mountain ranges and peninsulas, and small islands and coral reefs in the Pacific. Currently he is writing a book about the ups and downs of General Douglas MacArthur’s military reputation.
More from this reviewer
PrevFates and Furies
They Met at Wounded KneeNext