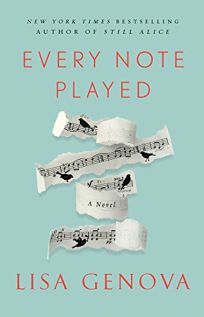 When I enthusiastically reviewed Lisa Genova’s Still Alice for “Bookin’ with Sunny,” I ended by saying that I looked forward to reading her next novel, Every Note Played. I just finished it, and I can truthfully say that Every Note Played examines amyotrophic lateral sclerosis, ALS, every bit as powerfully as Still Alice confronted Alzheimer’s. ALS, like Alzheimer’s, is a horrendous uncurable disease that saps the human body in incredibly inhumane ways.

Genova, a neuroscientist by training and a storyteller by instinct, humanizes the process. She writes powerful fiction about protagonists afflicted by uncontrollable neurological limitations. In the case of Every Note Played, the main character is a renowned forty-six-year-old concert pianist diagnosed with ALS. Paralysis grips first his right arm and then his left, followed by the stiffening of his neck and legs until, finally, he can no longer move, swallow, or even breathe. An interpersonal paralysis stifles Richard as well. Just as his body is growing ever more rigid and unusable, so his familial relationships have hardened into disrepair.

His ex-wife Karina sympathizes with Richard’s physical plight, though she still sees him through unforgiving eyes. Their daughter hasn’t spoken to her estranged father for more than a year, and Richard hasn’t spoken to his own father or his two brothers for decades. Genova envisions Richard’s story largely through his eyes, interspersing the deteriorating bodily events of the present with excursions into his memory. A horror of ALS is the fact that it attacks the body while leaving the mind intact, so Richard is devastatingly aware of every momentous decline and what that decline promises for his future. Even as he foresees his future, he also recalls a past filled with regrets.

An egotistical man, Richard always put his piano ahead of his family, making choices that propelled his career forward while leaving his wife and daughter in the shadows. Karina gave up a promising musical career of her own in order to advance Richard’s. With no appreciation of his wife’s sacrifices, Richard sought solace in the arms of other women when his marriage began to falter. And, either touring for weeks at a time or practicing twelve hours a day, he totally ignored his young daughter in her formative years. The emotional depth of Every Note Played places these fraught relationships in a new light.

Occasionally in the novel, Genova turns to Karina and examines her attitudes past and present toward her ex-husband. Another dimension of paralysis and rigidity exists in Karina’s heart and in the heart and mind of their daughter, too. Genova expresses those familial disconnects in ways that tug at the heartstrings but not maudlinly so. Richard and everyone around him are realistic human beings caught in a web that cannot free Richard from his ALS but perhaps can free him from his emotional ennui.

Genova accomplishes this by using Richard’s own finest hours, his musical prowess, and Karina’s (whose talents perhaps surpassed her husband’s when they first met). Overlaying the rhythms of the novel are the melodies of music.  “Traveling with the notes,” Richard feels “as if he were no longer trapped in his prison cage of a body.” Metaphorically, he flies. The same is true for Karina, too, listening to jazz rather than the classical music favored by her ex-husband. “The song becomes the journey, not the destination, about getting lost along the way,” about finding her way anew in the journey taking place throughout Every Note Played.

Lisa Genova has written another powerful novel about how neurological affliction can destroy a human mind and how it can affect family and friends and their lives, too. Not an easy novel to read, but one I whole-hearted recommend for every note it plays.  –  Ann Ronald 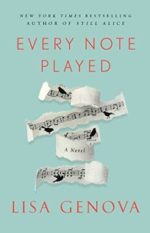 Ann Ronald is a retired English professor from the University of Nevada, Reno. Author of dozens of reviews, she’s also written a number of books about the American West. They include literary studies such as The New West of Edward Abby and Reader of the Purple Sage, cultural studies such as GhostWest and Oh, Give Me a Home, and nature writing such as Earthtones: A Nevada Album. Her latest is a work of fiction, Friendly Fallout 1953. Since retiring, she’s been reading vociferously, so “Bookin’ With Sunny” is giving her a wonderful opportunity to share thoughts about her favorite new discoveries.
More from this reviewer
PrevFreedom Soup
The Only Kayak; John Muir and the Ice that Started a Fire; Jimmy BluefeatherNext