Home » Reviews » The Only Kayak; John Muir and the Ice that Started a Fire; Jimmy Bluefeather

The Only Kayak; John Muir and the Ice that Started a Fire; Jimmy Bluefeather 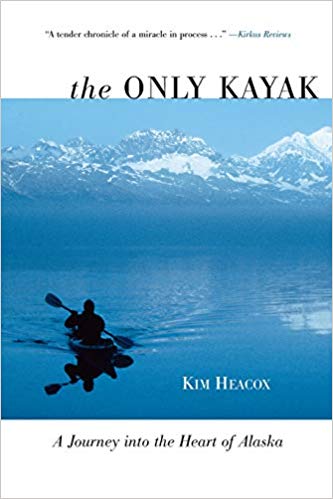 THE ONLY KAYAK; JOHN MUIR AND THE ICE THAT STARTED A FIRE; JIMMY BLUEFEATHER

Reading Kim Heacox is like sitting down with an old friend who, when he isn’t kayaking and mountain climbing through dangerous reaches of the Alaskan wilderness, is happily reading every book he can get his hands on. A one-time Glacier Bay ranger, Heacox still lives there in the village of Gustavus. When he isn’t writing, he’s adventuring, and then writing some more. The results are three quite different snapshots of the Alaskan wild, how it is changing in the face of “progress,” and what this special place means to those who fall under its spell.

The Only Kayak recalls Heacox’s personal love affair with Glacier Bay. Subtitled “A Journey into the Heart of Alaska,” his memoir begins with his first kayaking trip on the bay’s storied waters when he and a fellow ranger paddled through icebergs from Reid Inlet back to Gustavus. In 1979, they assumed they were the only kayak, a risky but satisfying way to experience the bay’s hazards, first-hand. Subsequent chapters show the reader more of the renowned glaciers that are receding at a rapid pace, and then branch out to other Alaska locales, where Heacox metaphorically equates his loner self, as well as the pristine Alaska of yore, as “the only kayak.” He is especially interested in the changes wrought by Alaska settlers and visitors—on the indigenous peoples and on the land itself. 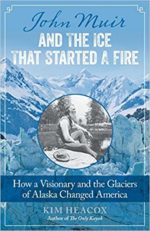 John Muir and the Ice That Started a Fire describes Muir’s love affair with the same terrain. But it has an even stronger environmental message, as its subtitle—”How a Visionary and the Glaciers of Alaska Changed America”—suggests. Muir especially loved Alaska because of its wildness. Passion aside, he intellectually appreciated Alaska because its glaciers substantiated Muir’s theory that glaciers shaped Yosemite, too. Scientists had been debunking what Muir insisted had happened millennia. Exploring Glacier Bay, measuring the ice and the striations it left on the terrain, gave him the proof he needed to support his beliefs. Muir’s seven visits to Alaska also prodded his preservationist instincts. He realized that Alaska, California, the whole American West need protection from extractive industries. Heacox’s book, after tracing Muir’s Alaskan adventures, extrapolates how those experiences informed Muir’s role as a founding father of the environmental movement. 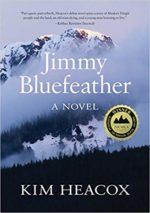 Jimmy Bluefeather, a novel, revisits Alaskan environmental change by telling an imagined story of a Tlingit elder. We see most of the novel’s action through old Zeb’s consciousness. A master carver, he is supervising the handmade construction of one final red cedar canoe. Then he, his grandson, the grandson’s girlfriend, another friend, and a dog named Steve paddle off though Icy Straits toward the foot of the glacier where Zeb was born nearly a century ago. What isn’t directly witnessed by Zeb in the novel is seen through a seasonal ranger’s eyes. She is drawn into Zeb’s story because the Tlingits are suing the U. S. government to recover their homeland, and multiple federal agencies fear Zeb’s historic voyage is a just political ploy. Complicating the controversy, Zeb’s daughters signify two quite different Tlingit political positions—Gracie wants to be able to visit Crystal Bay and its glaciers, like in the old days, while Ruby wants to open it for tourism, logging, and mining. Their arguments, plus Zeb’s reveries, allow Heacox to express a range of opinions about how Alaska’s past and future intertwine.

The Only Kayak and John Muir and the Ice That Started a Fire and Jimmy Bluefeather differ in their formats but offer similar points of view on what it means to experience Alaska intimately. Each conveys the same overarching concern about what progress is doing to previously pristine mountains and waters. Heacox’s thoughts about the changes stem from his own observations, while he presents Muir’s increasing awareness about environmental issues through Muir’s writing and through his encounters with contemporaries, the thinkers and movers whose lives intersected Muir’s. Heacox has read broadly and deeply about conservation politics, and his book includes a lively backdrop of preservationist trends that happened during Muir’s lifetime. Heacox makes no scholarly argument; his thoughts are instinctive. His book resembles a rich conversation that lasts long into the night, offering insights and connections. His writing, although learned and deeply grounded in resource, is never academic. Rather, his writing stirs a reader to contemplate ideas along with Heacox, perhaps to argue a bit, more likely to agree.

Heacox’s mind tends toward philosophical musings. In all three of these books, he will raise a question and then ponder possible answers and solutions. Environmental issues are not the only topic. For example, he caused me to think deeply about male bonding. More often than not, Heacox’s forays into the backcountry include another person. The Only Kayak watches that boyish camaraderie and supposed invincibility grow to responsible maturity as a small set of friends age, fall in love, start families and settle down. Heacox assesses Muir’s male friendships as well, showing how Muir’s interactions with others massaged the “great ice chief’s” attitudes and certainties. And Jimmy Bluefeather brings James to manhood as he helps his grandfather create the canoe, paddles them to the icy bay, and changes his name to reflect his heritage.  The novel, like Heacox’s two books of nonfiction, is filled with intuition. It’s almost magical realism, led by Raven and by Zeb’s cogitations, urges the reader to dream, not of failure but of possibilities.

Rarely does an author try to write in more than a single genre or two. To successfully write fiction as well as nonfiction, history as well as philosophy, logically as well as creatively, is an accomplishment few authors can boast. With the skill of a born storyteller, Heacox can boast indeed. When reviewing three books together, I generally have a favorite. Not so with The Only Kayak and John Muir and the Ice That Started a Fire and Jimmy Bluefeather. Each one is thoughtful, provocative, and ardently satisfying.  –  Ann Ronald 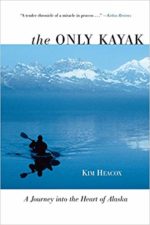 Ann Ronald is a retired English professor from the University of Nevada, Reno. Author of dozens of reviews, she’s also written a number of books about the American West. They include literary studies such as The New West of Edward Abby and Reader of the Purple Sage, cultural studies such as GhostWest and Oh, Give Me a Home, and nature writing such as Earthtones: A Nevada Album. Her latest is a work of fiction, Friendly Fallout 1953. Since retiring, she’s been reading vociferously, so “Bookin’ With Sunny” is giving her a wonderful opportunity to share thoughts about her favorite new discoveries.
More from this reviewer
PrevEvery Note Played
What It Takes, How I Built a $100 Million Business Against the OddsNext