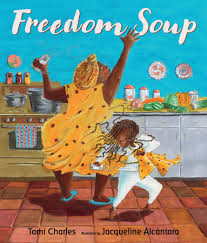 Just in time for New Year’s Day celebration is another great picture book from Candlewick Press. Freedom Soup is proof that the publishing world is beginning to get it right. Tami Charles writes from the heart and the appetite with a rousing story of a traditional Haitian soup cooked for family and friends celebrating the Haitian slave revolt and end of slavery in 1804.

Freedom Soup is Belle’s story of the year that her Ti Gran tells her that she is to help make the Freedom Soup. Jacqueline Alcantara’s illustrations electrify the pages as Ti Gran gathers the delicious ingredients, including music and dance steps. From the moment Ti Gran and Belle begin to prepare the herbs, the scent of what will come enters the story in swirling aromatic strokes of color. Page after page, we can smell the pumpkin cooking and then sliced as the swirling aromas move the reader from one ingredient to another.

By the time the meat and vegetables are stirred into the pot, Ti Gran asks Belle if she knows why the soup is called Freedom Soup. Belle responds with typical youthful verve, “Because it’s free?” Ti Gran laughs, “her loud, belly-deep laugh. ‘Oh, Belle. Nothing in this world is free, not even freedom.’” And it is now that Belle learns of the story of Haiti, where her Ti Gran is from.

For American children, of any family, it might surprise them to know that slavery was cruelly alive in other countries as well as the United States. A New Year’s tradition for slave owners in Haiti was to make the slaves cook a special soup, a soup the slaves had to cook, but a soup they were not allowed to eat. Ti Gran tells Belle that after years of abuse, the slaves revolted to gain back their freedom. It is here in the story of the revolt that we hear trumpets and see the slaves marching to war. These two pages are the only pages in which the swirling aromas of the soup are not seen.

The aromas return in the illustrations of the Haitian slaves celebrating their freedom with song, dance, and food. On these two pages, we see Ti Gran lifting the lid of her pot of soup, releasing the aromas of freedom. Ti Gran lowers the flame beneath the pot while Belle throws in the last ingredient, the pasta. It is time to rest. Ti Gran tells Belle that she learned the tradition of Freedom Soup from her grandmother, and she taught it to Belle’s mother. Belle asks, “And I’ll teach my children one day?”

No matter what our family backgrounds are, special stories and food have been shared and handed down generation after generation.  Belle tells us, “All around, just like my family, people gather and share. In our house, we celebrate until the last drop of soup is gone, gone, gone.”

What makes this book doubly unique is that the recipe for the soup is included at the end of the story, and the author has added Notes to add historical depth. This book is to be a Christmas gift for a young friend in Portland, OR, and I will certainly encourage Lilly’s mom and dad to include Freedom Soup for their own New Year’s Day supper. I shall return to this review with an addendum and let you know if they like the soup as much as I hope they will like the story.   –   Sunny Solomon 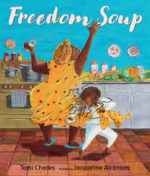 Sunny Solomon holds an MA in English/Creative Writing, San Francisco State University. She is a book reviewer for “The Clayton Pioneer” and her poetry and other writing has been published in literary journals, one chapbook, In the Company of Hope and the collection, Six Poets Sixty-six Poems. She was the happy manager of Bonanza Books, Clayton, CA and Clayton Books, Clayton, CA. She continues to moderate a thriving book club that survived the closure of the store from which it began. Sunny currently lives next to the Truckee in Reno, NV.
More from this reviewer
PrevEdinburgh Twilight
Every Note PlayedNext