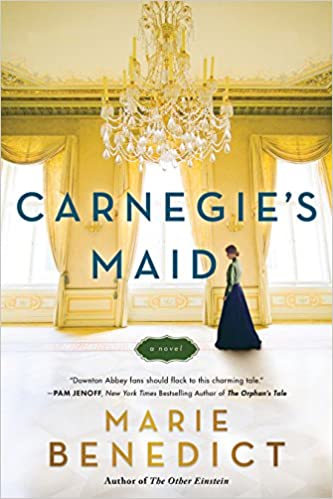 In her conversational comments at the close of Carnegie’s Maid, Marie Benedict summarizes her novelistic philosophy. “I write historical fiction,” she explains, “that aims to uncover hidden women’s stories.” She did so in her previous novels I’ve read, writing of Hedy Lamarr, of Agatha Christie, of Mileva Marić Einstein. The same is true in Carnegie’s Maid, although, unlike her other books, this one has a slightly different premise. Carnegie’s Maid is built around someone who might have existed, not someone who actually can be traced historically.

Andrew Carnegie, one of the wealthiest businessmen of America’s Gilded Age, was ruthless in his business dealings. Always willing to pursue insider trading and eager to crush the opposition, he showed little regard for decent working conditions and used questionable methods to break strikes and negotiations. Nonetheless, he also built a well-deserved reputation as a generous donor who benevolently supported many important endowments. Among those are the notable Carnegie libraries found across the United States and throughout the world.

The real Andrew Carnegie remains a bit of a historic puzzle. How did his magnanimous generosity mesh with his utter ruthlessness? Further, he remained a bachelor for much of his life, not marrying until he was in his mid-fifties, after his mother’s death. Marie Benedict imagines a story that purports to answer both of those mysterious conundrums. Might there have been a woman in his life, someone he couldn’t marry because of her social status but someone who strongly influenced the other choices he made?

Benedict concocts Mrs. Carnegie’s maid, Clara Kelley, an Irish immigrant girl who resembles so many of the Irish ancestors in Benedict’s own family. Clara isn’t a real historic figure but rather is a composite. Her job in Carnegie’s Maid is to serve Andrew Carnegie’s mother’s every whim. At the same time, she also manages to capture the attention of one of America’s foremost immigrant tycoons. Their friendship begins intellectually, with a mutual enthusiasm for poetry. Despite their lowly beginnings, both were widely read and appreciated good books. Their meeting of the minds then expands into the Carnegie business pursuits, with Clara taking a keen interest in her master’s investments and mergers.

At the same time, Clara distrusts his baser instincts. She is uneasy about his attentions, and she is particularly uncomfortable with Carnegie’s willingness to go for the jugular in his business dealings. When she sees first-hand how his predatory behavior destroys her cousin’s Pittsburgh livelihood, she confronts the millionaire. How can he, a man with Chartist beginnings, now treat human beings as expendable?

Carnegie’s Maid begins with a scene from Carnegie’s future. Clearly Clara is no longer a part of Andrew Carnegie’s life, clearly he misses her dearly, clearly he wishes to atone for whatever happened. He’s writing to himself and to her, imagining her fate and further imagining how he might honor his memories of her. Thus, he is penning the philanthropic manifesto that the real Andrew Carnegie actually wrote. What happens next, the full story of Clara Kelley, comprises the heart of Carnegie’s Maid.

As I wrote at the outset, this novel differs from others that unearth the talents of unrecognized women in that Clara is solely a figure of Marie Benedict’s invention. Let me emphasize, though, that Clara grows out of meticulous research with careful attention to historical fact and historical possibilities. Benedict has done her homework. I found Carnegie’s Maid a fitting imaginary exclamation point to replace a historical puzzle that has always featured a question mark. How did such a generous philanthropist develop from the energies of such a greedy and callous young entrepreneur? –  Ann Ronald

Also available by Marie Benedict: Her Hidden Genius; The Personal Librarian; The Mystery of Mrs. Christie; Smoke Signal; Agent 355; Lady Clementine; The Only Woman in the Room; The Other Einstein. 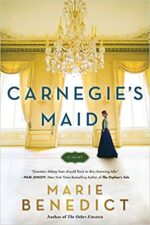 Ann Ronald is a retired English professor from the University of Nevada, Reno. Author of dozens of reviews, she’s also written a number of books about the American West. They include literary studies such as The New West of Edward Abby and Reader of the Purple Sage, cultural studies such as GhostWest and Oh, Give Me a Home, and nature writing such as Earthtones: A Nevada Album. Her latest is a work of fiction, Friendly Fallout 1953. Since retiring, she’s been reading vociferously, so “Bookin’ With Sunny” is giving her a wonderful opportunity to share thoughts about her favorite new discoveries.
More from this reviewer
PrevOrigin, A Genetic History of the Americas
The Beekeeper of AleppoNext