Home » Reviews » The Beekeeper of Aleppo

The Beekeeper of Aleppo 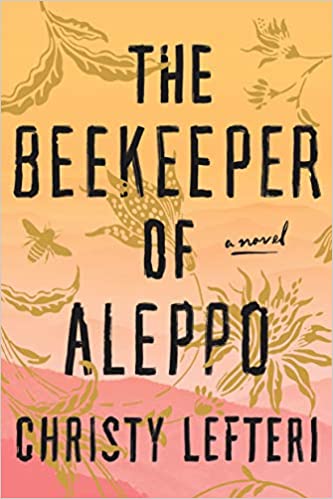 The Beekeeper of Aleppo gives voice to asylum seekers with compassion and complexity. People whose troubles we only thought we knew.

Christy Lefteri’s novel The Beekeeper of Aleppo is the story of fictional refugees from real places seeking asylum. It is the best book I’ve read so far in 2022, and I cannot believe it will be topped, certainly not for storyline or writing. Before reading the novel, I suggest you read Author’s Note and be sure to look at the map found on the page before the author’s photographs.

The refugees in Lefteri’s story are generally from the Middle East and parts of Africa, with the protagonist and his wife, Nuri and Afra, escaping from Aleppo, Syria. There are so many things that make Beekeeper outstanding I’m not sure where to begin. First, this is a story of refugee asylum seekers, men, women, and children, seeking safety from unspeakable conditions in their homelands, risking their lives to cross the Mediterranean in unseaworthy watercraft piloted by untrustworthy smugglers, and paid for with life savings. Greece becomes the first place of refuge, if they are lucky, on their way to someplace else, someplace where they hope family or friends wait for them.

Secondly, based on the author’s background, personal and professional, her ability to give over her POV as author to Nuri’s first-person voice is so successful that a reader can imagine Beekeeper to be a memoir and not a novel. It is Nuri’s story, and although he and his wife Afra are the central characters, their story is multiplied by the stories of those they escape with and those they meet when they reach Greece. And thirdly, Lefteri succeeds again when taking on the male voice of Nuri as the protagonist. She could just as easily have told the story from Afra’s female voice.

We are pulled into Nuri’s story on page one: “I am scared of my wife’s eyes.” His wife, Afra, is sitting naked on a bed, waiting for Nuri to dress her. “She can’t see out and no one can see in.” What we know is that she is dependent on her husband’s care. What we don’t know is how she lost her sight and who is Mohammed, whose marble she rolls around her fingers while waiting to be dressed. She complains of pain behind her eyes and asks to be taken to the doctor. When Nuri tells her that first, they must obtain “papers” before she can see a doctor, it is the first time we wonder where they are that they need papers to see a doctor. Nuri and Afra’s story moves from one refugee camp to another and then back to Syria and back again to camps and finally safe houses.

The movement from one camp to another, from one country to another, from present to past, and past back to present can be confusing. Keeping track of the minutiae of paperwork required, passports, travel permits, medical records, may make the reader feel frustrated and put upon. My guess is that it’s intentional. What better way to mirror the feelings of Nuri and Afra and so many others?

And can we remember exactly who is who? Who is trustworthy? What about that marble mentioned on page one? The cast of characters, and their backgrounds, from Nuri’s dearest friend and partner in Beekeeping, Mustafa, to young Mohammed, who, scared and alone, crosses the Mediterranean with Nuri and Afra (who are now childless), to the aid workers whose efforts are both encouraging and discouraging. The worst of the backstories are the deaths of children, family, and friends, the random terror shredding to pieces any hopes that life in Aleppo will ever get better. No matter how great Nuri and Afra’s loss, Afra is blindly determined to remain in the place of that loss.

Nuri desperately wants to reach England, where Mustafa and his wife and daughter have already settled, and desperately hope that somehow Nuri and Afra will make it. Is Nuri a believable character? Can we imagine any American male with his sensibilities? In Mustafa’s letter of farewell to Nuri, when he tries to explain why he can wait no longer to leave Syria, he writes, “You are too soft, too sensitive. This is an admirable quality when it comes to working with bees, but not now.” But as Nuri tells us after finally convincing Afra to leave Aleppo, the dangers they face in camp after camp will test to the core his being “too sensitive.”

Since this is not a book report, I won’t divulge the ending. It is enough to say that Christy Lefteri has brought to life the courageous lives of those who survive capsized boats barely making their way to Greek beaches. The Beekeeper of Aleppo closes the distance between the reader and the faces we saw nightly from news footage of those very refugees. And where are some of those same asylum seekers today? The truth is heartbreaking.

I will never again read so quickly the news stories of asylum seekers, the stories of loss, families separated, paperwork never-ending, and waning support for those suffering. The faces of Lefteri’s asylum seekers are the same faces we see at our own borders with Mexico. Nuri’s story is beautifully told and hopefully, The Beekeepers of Aleppo will be read for years to come. –  Sunny Solomon

Also available by Christy Lefteri: A Watermelon, a Fish, and a Bible; Songbirds. 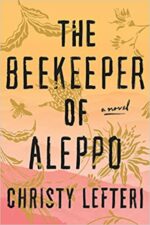 Sunny Solomon holds an MA in English/Creative Writing, San Francisco State University. She is a book reviewer for “The Clayton Pioneer” and her poetry and other writing has been published in literary journals, one chapbook, In the Company of Hope and the collection, Six Poets Sixty-six Poems. She was the happy manager of Bonanza Books, Clayton, CA and Clayton Books, Clayton, CA. She continues to moderate a thriving book club that survived the closure of the store from which it began. Sunny currently lives next to the Truckee in Reno, NV.
More from this reviewer
PrevCarnegie’s Maid
Bound for GoldNext