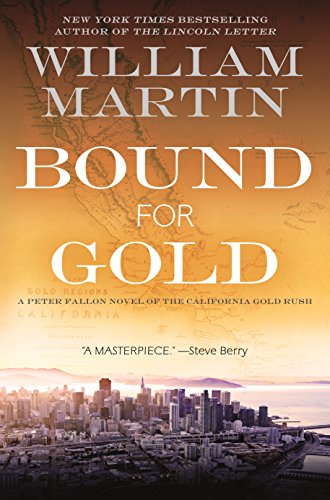 Bound for Gold, William Martin’s sixth Peter Fallon novel. This one is a West Coast page-turner as tasty as it is mysterious, both in the past and present.

The Peter Fallon series stars an antiquarian bibliophile who collects rare books and who pursues archaic manuscripts. His services as an evaluator of ancient literary artifacts are greatly in demand, and his escapades always seem to involve both past and present intrigue. Bound For Gold, the sixth Peter Fallon novel is no different. William Martin has written a page-turner where, once again, Peter scrambles in search of a missing manuscript while simultaneously trying to make sense of why so many other people also are trying to find it (or to make it disappear).

Bound for Gold takes the Bostonian bookseller west to San Francisco, old and new, to the 1849 goldfields and to contemporary California wineries. The missing manuscript is a diary written by a young man who left New England, not only to seek his fortune but also to write about his adventures in the untamed West. James Spencer sends letters and dispatches home, but his diary holds the key to his fortune. Or so Peter Fallon is told when he’s hired to locate and compile the seven segments of Spencer’s diary. Bound for Gold includes those segments as Peter finds them, interspersed with Peter’s own contemporary western adventures.

Accompanying Peter is his on-again/off-again girlfriend, Evangeline Carrington, a travel writer on assignment to lure visitors to California wineries. She also is imagining further articles about San Francisco sightseeing and restaurants, so her side trips take the couple to several exotic and evocative settings. The zinfandel and cabernet comparisons are subtle and smart; the meals sound superb. The Chinatown encounters, however, turn perilous.

That’s one of the connecting links between the ‘49er past and Peter Fallon’s contemporary California adventures. Both involve the extensive San Francisco Chinese community. James Spencer befriends a group of Chinese miners, even though racism was rampant in the goldfields. Later, in San Francisco, James maintains friendships that will echo throughout his life. Peter’s encounters with the Chinese differ in that now the Chinese characters are wealthier, more powerful, and often more brutal. They still play important roles. They’re trying to get James’ diaries, too, and trying to re-mine the California gold fields as well. Without them, there is no Bound for Gold.

There’s no thriller, either, and that’s one of the things William Martin does best. He blends history with mystery in innovative ways. Reading his novels, I always learn historic details I didn’t know before. I was surprised, in fact, to discover new facets of the gold rush and of historic San Francisco. Both were colorful milieux, and Martin brings that color to life. The exhaustion of digging for gold, the frontier vigilantes, the vile prejudice, the raunchiness in the foothills. And then, in the bustling boomtown, the incessant fires, the ethnic gangs, the earthquakes always rumbling beneath the surface, the violence that was there, too. At the same time, Martin enlivens the present. His contemporary details are just as meticulous. The sweeping vineyard scenes, the old Spencer mansion/mausoleum, Chinatown, even the gang wars that ensnare Peter and Evangeline in their tracks.

I’ve read several Peter Fallon novels and have enjoyed every one of them. Perhaps Bound for Gold is my favorite, though, in that it replicates familiar places and sounds familiar themes while nonetheless showing me something new on nearly every page. The others I’ve read have been set on the East Coast in Revolutionary times, great for me to learn about an era unfamiliar to me. But Bound for Gold takes place on my stomping grounds, and I was pleased with Martin’s successful portrayal. “Bookin’ with Sunny” readers, especially Californians, will love this book. –  Ann Ronald 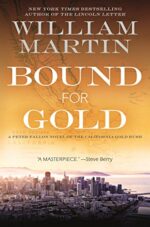 Ann Ronald is a retired English professor from the University of Nevada, Reno. Author of dozens of reviews, she’s also written a number of books about the American West. They include literary studies such as The New West of Edward Abby and Reader of the Purple Sage, cultural studies such as GhostWest and Oh, Give Me a Home, and nature writing such as Earthtones: A Nevada Album. Her latest is a work of fiction, Friendly Fallout 1953. Since retiring, she’s been reading vociferously, so “Bookin’ With Sunny” is giving her a wonderful opportunity to share thoughts about her favorite new discoveries.
More from this reviewer
PrevThe Beekeeper of Aleppo
The Phantom TollboothNext