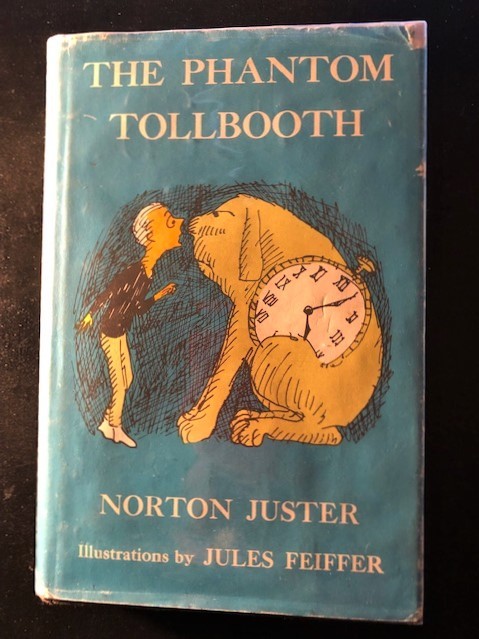 The Phantom Tollbooth – You are never too old to read and love Norton Juster’s 1961 novel marketed for children.

How is it possible to have nearly reached the age of eighty without having read Norton Juster’s The Phantom Tollbooth? No fair jumping to conclusions. All right, I was too old when it first came out in 1961; I mean, what college freshman is going to read a book marketed for children? But move a few years forward to 1968 when I had the first of my three kids, and by the time they were in school and within the market range of 10-14, I should have remembered at least one of them having read it.

I have just finished The Phantom Tollbooth and am already planning to reread it. To all my adult followers of Bookin’ with Sunny, do not pass up this book. Whatever “The Doldrums” you still may be experiencing from COVID, or, if you find yourself in the “Confusion of the Market Place,” or terrified of the Putin demon from the “Mountains of Ignorance,” let me assure you, unless you’ve lost your sense of wonder, amazement, astonishment, or belief in the power of words, you will not regret reading this novel.

Let me backtrack to the plot of Juster’s story. It is very much a story for school kids who may find school or just about anything plain boring. The character Milo is a very ordinary boy, somewhere around eight to ten years old (according to the author), who laments: “there’s nothing for me to do, nowhere I’d care to go, and hardly anything worth seeing.” English and math are his least favorite school subjects and disbelieves they could possibly be important to a kid.

All that changes one day when Milo goes to his bedroom in total boredom, only to find a mysterious package. It is enormous. “For, while it was not quite square, it was definitely not round, and for its size it was larger than almost any other big package of smaller dimension that he’d ever seen.” Attached to the package is an envelope which says, “FOR MILO, WHO HAS PLENTY OF TIME.” The letter informs Milo that the package contains a tollbooth he is to assemble, coins for the tollbooth, and further instructions for “THOSE WHO HAVE NEVER TRAVELED IN LANDS BEYOND.”  With the tollbooth assembled, Milo gets in his toy car and drives through the tollbooth.

Stories of mystery and adventure are not limited to the purview of children’s literature. And although PT may not be categorized as science fiction, it certainly has all the phantasy of Lewis Carroll’s Alice in Wonderland, which continues to be read by children and adults. Whatever satire might easily be lost on the young reader of The Phantom Tollbooth, it is front and center for the adult reader. As you can see from the map, The Land Beyond, covers a lot of places for Milo to visit and hopefully experience and learn things never before anticipated.

The puns run rampant, and one of the best and earliest is a watchdog named Tock, a dog with an alarm clock in place of a stomach. Tock becomes part of Milo’s adventure, as well as Humbug, a naysaying beetlelike bug who argues with a bee (a spelling bee, no kidding) about the unimportance of words. He tells Milo, “A slavish concern for the composition of words is the sign of a bankrupt intellect.”

Milo’s challenge is to rescue two princesses, Rhyme and Reason, who have been banished to a jail in the sky, jailed by their stepbrothers who cannot manage to get along, each one the ruler of Digitopolis and Dictionopolis. Luckily, Milo has his trusty companions, Tock and Humbug, who become the friends he has never had before he paid his tollbooth toll.

The illustrations of Jules Feiffer give such life to Juster’s story. I still remember those parents who came into the bookstore I managed before retirement and told me they wanted a chapter book for their child and then added: But, please, no illustrations! I would shake my head and ask, What do you have against art? Illustrations are art. Please do not add to the number of children who will grow up to not appreciate the breadth and depth of art.

If we are honest, we can admit there are life lessons we never learn, math problems we still do not care if we ever solve, and books filled with words we wish we had read. I am filling boxes of books to donate to The Friends of the Washoe County Library System in my efforts to downsize my personal library so that when my reading days are used up, my children will not throw up their hands in dismay at what I have not parted with. Unfortunately for them, I have decided to put The Phantom Tollbooth back on the shelf. Except, this time, I will move it from Children’s Literature to straight fiction, proving that I am not past learning what is really important. –  Sunny Solomon

Also available by Norton Juster: The Dot and the Line; The Hello, Goodbye; The Odious Ogre; Albert the Wise and Other Journeys; Neville; Otter Nonsense; Sourpuss and Sweetie Pie; A Surfeit of Similes; So Sweet to Labor: Rural Women in America, 1865-1895.

Also available by Jules Feiffer: Backing into Forward, a Memoir; Out of Line; The Explainers; The Man in the Ceiling; Bark, George; The Comic Book Heroes; Kill My Mother; I Lost My Bear; Sick, Sick, Sick; Feiffer’s People; A Barrel of Laughs, A Vale of Tears; I’m Not Bobby; Marriage is an Invasion of Privacy; Rupert Can Dance; Smart, George; Meanwhile; The Explainers; Passionella and Other Stories; The Nervous Set; Meanwhile; Across the Street; Henry, the Dog with No Tail; Tantrum; Little Murders; Cousin Joseph; A Room with a Zoo; My Side of the Car; By the Side of the Road. 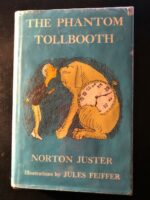 Sunny Solomon holds an MA in English/Creative Writing, San Francisco State University. She is a book reviewer for “The Clayton Pioneer” and her poetry and other writing has been published in literary journals, one chapbook, In the Company of Hope and the collection, Six Poets Sixty-six Poems. She was the happy manager of Bonanza Books, Clayton, CA and Clayton Books, Clayton, CA. She continues to moderate a thriving book club that survived the closure of the store from which it began. Sunny currently lives next to the Truckee in Reno, NV.
More from this reviewer
PrevBound for Gold
RodhamNext