Home » Reviews » Origin, A Genetic History of the Americas

Origin, A Genetic History of the Americas 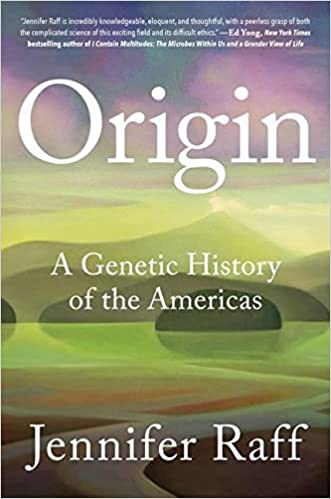 Origin, A Genetic History of the Americas – turns up the heat on the understanding of genetics and its contributions to what we know about the earliest residents of the Americas.

No matter how much I try to understand DNA, genomes, and alleles, much of it passes me by. Deep into discussions of A, C, G, the genetic code letters, I turn the page. Still, I am fascinated by what genetics has contributed to our understanding of homo sapiens, homo neanderthalensis, Denisovans, and others. (See my previous reviews of Yuval Noah Harari, Sapiens: A Brief History of Humankind, and Rebecca Wagg Sykes, Kindred: Neanderthal Life, Love, Death, and Art.) And now, Jennifer Raff’s Origin, A Genetic History of the Americas.

For decades, I have known about the land bridge that connected Asia to Alaska across the Bering Strait. Obviously, “land bridge” is a metaphor—not meant to convey something as specific as, say, the Brooklyn Bridge. I was nevertheless unprepared for Raff’s description of the land bridge between Asia and North America, one that is now several hundred feet under water, as being twice the size of Texas, or about the same size as Alaska is today. Much of that was covered by the ice sheet associated with the Last Glacial Maximum (LGM) but enough was un-iced to permit a plethora of flora and fauna, including an untold number of homo sapiens, to be resident. That’s an interesting aspect—they were residents. They weren’t merely migrating from Asia to Alaska. They may have lived there 15,000 years before the land bridge became a migratory route, or maybe North and South America were peopled much earlier than the conventional date of about 11,000 BCE. Maybe these peoples used the land bridge as a point of departure for paddling boats to points south and east.

Some of the above is conjectural and highly contested within the academic communities, but it is at the heart of Raff’s Origin; her attempt to bring the general reader up to date about the latest research (2022 publication date) in the fields of anthropology, archaeology, and paleo genetics as applied to the peopling of North and South America. It is not a simple story, summarizing and analyzing as she does dozens of competing theories, hypotheses, and evidence from many archaeological sites. After resifting piles of evidence and resifting again through the screen of modern genetics, she concludes that the original homo sapiens came earlier to the Americas than 11,000 BCE, that they were genetically related to two major Asian types of homo sapiens, and that modern (post-contact) Amerindians are definitely from these two genetic pools. Further, some may have not used the land bridge at all but may have used boats to get as far as Florida before 11,000 BCE.

If Raff were applying these methods and reasoning to more recent history, some commentators might accuse her of revisionism or Critical Race Theory, but of course, this is what scholars do. They apply the most advanced methods and skills to their chosen fields and let the Clovis points fall where they may. All worthwhile historical scholarship is revisionist; it tries to advance our understanding of the past, the present, or both.

This is not to say that Raff’s perspective is neutral. This young scholar, ensconced in a relatively minor laboratory (her words) at the University of Kansas, begins her book by declaring that “this book was written on land taken from the Kaw (Kansa), Osage, and Shawnee nations.” Throughout the book, she tries to keep her science integrated with her humanity; she recognizes that the relationship between scientists (anthropologists and biologists alike) and Amerindians has often been fraught with disrespect and dishonesty. Hers is a more sensitive and nuanced analysis than the cynical observation that some people have disease, fleas, and malnutrition, but that Indians have anthropologists. –  Neal Ferguson 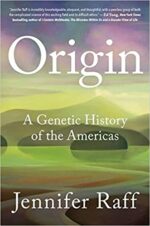 Neal Ferguson is a self described Anglo-phile. After studying for a PhD in British history and doing research for a year in various British archives, he came to the University of Nevada in 1970 to teach. Soon he found himself in administration where he remained until 2003. After returning to full-time teaching a decade ago, he decided to concentrate his teaching energies on Medieval British history and various global aspects of World War II. Dedicated to Ambrose Bierce’s proclamation that the purpose of war is to teach Americans geography, Neal insists that his students accompany him (in class) to sundry east European rivers and steppes, African deserts and jungles, south-east Asian mountain ranges and peninsulas, and small islands and coral reefs in the Pacific. Currently he is writing a book about the ups and downs of General Douglas MacArthur’s military reputation.
More from this reviewer
PrevChildren of the Land
Carnegie’s MaidNext