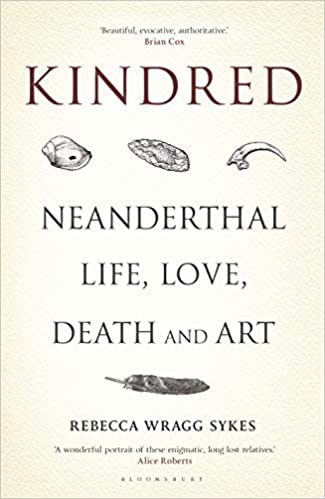 Full disclosure: three percent of my DNA is Neanderthal (homo neanderthalensis) in origin, a fact that explains a lot. Alas, I’m not alone.  The vast majority of us homo sapiens alive today have similar amounts of Neanderthal DNA.  The definitive evidence for this has come from genetic studies done in the last dozen years.  Sykes’s discussion of how, where, when, and why these two tribes of genus Homo fooled around, and our knowledge of the resulting progeny is only one reason that Kindred is fascinating reading.  Sex sells.

As Sykes’s subtitle suggests, she is giving the reader an all-around view of the Neanderthals, living and roaming as they did, over much of the earth for perhaps four hundred thousand years. During their existence, they adapted quite well as parts of their habitat went from near arctic to near tropical conditions.  Each of the chapters begins with several paragraphs of allusive, imaginative prose introducing the themes of the remainder of the chapters, which deal with the hardcore issues pondered by archaeologists, paleontologists, geneticists, and other scientists. The issues are large, complex, and occasionally recondite, including the history of how our knowledge of the Neanderthals has evolved, including numerous cultural and scholarly arguments about them.  Prominent among the arguments, and ones that Sykes takes pains to debunk, are that the Neanderthals were more barbaric, less human, less smart, less adaptable than were early homo sapiens.

One might say that she has an ax to grind in Kindred, but that would be the wrong metaphor since the stone tools they made were chipped and flaked, not ground metals.  Grinding, presumably, would come later. Think of Fred Flintsone.  In fact, if I have a criticism of this charming, engaging book, it is that Sykes lures the reader into the weeds in her chapter on Neanderthals’ tool-making prowess, their “lithics” in specialist lingo. They left millions of stone tools and their remnants (talus) in hundreds of sites around the globe.  If only the flints, chalcedony, cherts, and volcanic glass (obsidian) could speak, we would know so much more about the Neanderthals.  In Kindred, Sykes goes into exquisite detail concerning Neanderthal lithics, describing them by type of tool, by manufacturing methods, by region, and by epoch, thus successfully but exhaustively showing (at least to me) how skillful and adaptive they were.  (In an effort to overcome my ignorance about stone tool-making techniques, I resorted to watching half a dozen YouTube videos showing how modern lithics are made.  Perhaps I now understand better the differences between a core and a flake and between percussion and pressure flaking.)

Why did the Neanderthals disappear from the hominin drama about forty thousand years ago?  Did homo sapiens kill them off?  Did interbreeding leave them without a separate tribe?  Were they as child-centered and respectful of the dead as early homo sapiens appear to have been?  Did they regard the world with awe, imagination, and resourcefulness?  Sykes’s answers to these and other questions are complicated but always interesting. As a species Neanderthals, were successful. Four hundred thousand years is a long time.  In Kindred, Rebecca Sykes, a Neanderthal research specialist in paleontology and archaeology, has written a book that is remarkable, and one that will be regarded as a companion to Yuval Harari’s, Sapiens: A Brief History of Humankind.  – Neal Ferguson 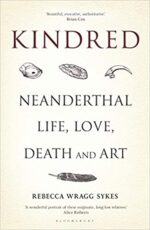 Neal Ferguson is a self described Anglo-phile. After studying for a PhD in British history and doing research for a year in various British archives, he came to the University of Nevada in 1970 to teach. Soon he found himself in administration where he remained until 2003. After returning to full-time teaching a decade ago, he decided to concentrate his teaching energies on Medieval British history and various global aspects of World War II. Dedicated to Ambrose Bierce’s proclamation that the purpose of war is to teach Americans geography, Neal insists that his students accompany him (in class) to sundry east European rivers and steppes, African deserts and jungles, south-east Asian mountain ranges and peninsulas, and small islands and coral reefs in the Pacific. Currently he is writing a book about the ups and downs of General Douglas MacArthur’s military reputation.
More from this reviewer
PrevThey Met at Wounded Knee
Courting Mr. LincolnNext