Home » Reviews » Before We Were Yours

Before We Were Yours 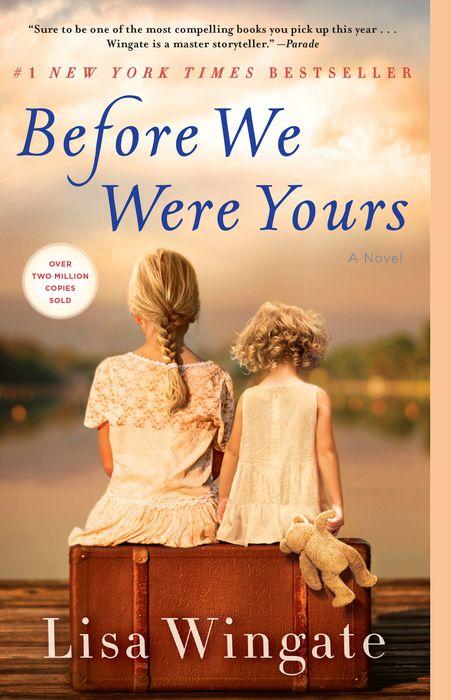 Before We Were Yours – Lisa Wingate’s fictional character discovers and uncovers the hidden and difficult historical truths surrounding her family’s past.

Because I so enjoyed The Book of Lost Friends, I looked for another Lisa Wingate novel. I was particularly drawn to Before We Were Yours, which has a structure and narrative pattern very much like Lost Friends. Both novels draw upon archival materials that reveal heinous acts of an earlier generation. Fictionalizing those incidents, both novels also feature someone from a later generation who seeks to uncover the secrets hidden in an uncomfortable and heretofore unknown past.

In the case of Before We Were Yours, the past centers on the Tennessee Children’s Home Society, a Memphis orphanage that acquired children, often through unsavory methods such as kidnapping or lying to a birth mother about the “death” of her newborn child. Led by Georgia Tann, the Society then sold the children to wealthy couples who paid exorbitant prices for the illicit adoptions and accompanying falsified paperwork.

Before We Were Yours imagines a shantyboat family camped on a Mississippi River backwater. When the impending birth of twins turns impossibly difficult, the father takes his pregnant wife across the river to a doctor. Under the watchful care of the eldest, twelve-year-old Rill Foss, the couple’s five remaining children stay behind. Too much time elapses, until a team of rough-handed lawmen arrives and forces the Foss siblings into custody. Their destination? The Tennessee Children’s Home, where their lives turn dismally dark.

These scenes from the past, fictionalized from archived real-life experiences, are narrated by Rill, who desperately tries to hold her family together. Fast forward from 1939 to the present. Now Before We Were Yours focuses on the daughter of a United State Senator, home to assist her father who suffers from cancer. The heir-apparent to his senate seat, Avery Stafford operates more like a wind-up doll than a real human being, dutifully obeying every whim of her mother and of her father’s protective staff. When she accompanies her father to a photo op at a nearby nursing home, however, her life changes irrevocably.

One of the residents grabs the bracelet Avery is wearing, a bracelet given to her by her grandmother, Judy, who suffers from dementia and who lives in an Alzheimer’s facility nearby. The elderly woman, May Crandall, seems to recognize the distinctive jeweled band, and calls Avery by another name. Puzzled, Avery goes to May’s room, questions the woman who is physically frail but not at all forgetful, and notices a photo of four laughing woman who all look familiar. Not only do they rather resemble Avery, but one of them definitely looks like Grandmother Judy.

The rest of Before We Were Yours moves seamlessly back and forth between the Foss family’s 1939 dilemmas and Avery’s search for the truth of May’s connection with the oh-so-correct Stafford family. Using her skills as an attorney, quizzing May further, remembering odd tangents voiced by Judy and even recalling unexplained incidents, Avery digs into unfathomable secrets of the past. At the same time, she undergoes a gradual distancing from her family’s expectations, a coming-of-age as she begins to define her own future instead of submitting to the dictates of her family’s desires.

Before We Were Yours is every bit as satisfying as The Book of Lost Friends. I didn’t learn as much history, but I definitely opened a nasty chapter of American life, a disgusting underbelly of privilege and wealth exerting its authority over those impoverished and in need. The Foss children have no good options open to them. Their scenes in the novel tend to be dismal, though Rill is a creative young dynamo who does her best to protect her siblings. In her own way Avery is just as dogged, so the two narratives arrange themselves into an effective point/counterpoint as the novel progresses. Its ending seemed obvious, but even so I wasn’t quite prepared for all the secrets revealed. The denouement of Before We Were Yours is a most effective authorial success. –  Ann Ronald

Also available by Lisa Wingate: The Book of Lost Friends; The Prayer Box; Before and After (with Judy Christie); The Story Keeper; Tending Roses; The Sea Keeper’s Daughter; Dandelion Summer; A Month of Summer; Good Hope Road; The Langue of Sycamores; A Thousand Voices; Larkspur Cove; Drenched in Light; The Summer Kitchen; Blue Moon Bay; The Sea Glass Sisters, Prelude to The Prayer Box; Beyond Summer; Wildwood Creek; Word Gets Around; The Tidewater Sisters; Texas Cooking; Talk of The Town; Never Say Never; Lone Star Café; The Sandcastle Sister; Over the Moon at The Big Lizard Diner; Jolas Briefe; The Shores of Moses Lake 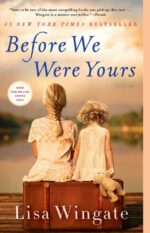 Ann Ronald is a retired English professor from the University of Nevada, Reno. Author of dozens of reviews, she’s also written a number of books about the American West. They include literary studies such as The New West of Edward Abby and Reader of the Purple Sage, cultural studies such as GhostWest and Oh, Give Me a Home, and nature writing such as Earthtones: A Nevada Album. Her latest is a work of fiction, Friendly Fallout 1953. Since retiring, she’s been reading vociferously, so “Bookin’ With Sunny” is giving her a wonderful opportunity to share thoughts about her favorite new discoveries.
More from this reviewer
PrevAmerican Gospel
The Last PassengerNext