The Book of Lost Friends 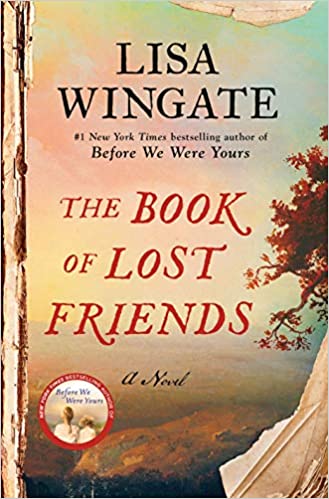 THE BOOK OF LOST FRIENDS

Lisa Wingate’s The Book of Lost Friends is a historical novel firmly grounded in historic poignancy and pain. For many years after the Civil War, the Southwestern Christian Advocate, a Methodist newspaper with more than four thousand subscribers, published a column titled “Lost Friends.” Subscribers posted notices for free, while non-subscribers were charged fifty cents. Each column detailed a forced generational separation and attested to the personal anguish of an ex-slave who had been separated from his or her family. Seeking those who have been lost, the writers plead for reconciliation if only the lost can be found again. Beyond its subscribers, the Southwestern also was sent to approximately five hundred preachers so they could read the supplications to their parishioners, and additionally, to eight hundred post offices for further distribution. A pre-digital version of the internet, Wingate suggests.

Today a Lost Friends database exists, generated by the Historic New Orleans Collection and available to researchers and descendants “searching for family roots,” providing the inspiration for the fictional Book of Lost Friends. Wingate scrolled through the synopses of thousands of families “torn apart by greed, chaos, cruelty, and despair,” then decided to extrapolate from a single posting, focusing on a young Black woman in search of her kin. Every chapter in the novel, however, begins with yet another Lost Friend column, signifying the breadth and depth of the horrors perpetrated in the pre-and post-Civil War South. What a non-Black, twenty-first-century reader might imagine in the abstract is horrifically shallow compared to the Lost Friends reality that Wingate so tragically brings to life.

Her narrative follows Hannie Gossett from Louisiana to Texas. Forcibly ripped from her mother’s arms when she was six after watching her brothers and sisters and cousins sold separately, Hannie has grown up to become a surprisingly self-sufficient teenager in 1875. Now she is on a quest to find someone, anyone, who might be related. At the same time, we learn the backstory of the wealthy Gossett family, who owned Hannie’s family and responsible for its tragic dissolution. They are part of Hannie’s journey, too, in a maze of twists and turns.

Fast forward to Augustine, Louisiana, in 1987, where Benedetta Silva has just taken a job as a high school teacher. Her students, mostly Black and mostly from broken homes, are disinterested in learning, unruly in the classroom, and unspeakably rude when she first arrives. Determined to succeed where previous teachers have failed, Benny takes an interest in the local history. Her rental home, part of the old Gossett property, sits alongside two segregated cemeteries. Not far away stands the abandoned Gossett mansion, filled with volumes of books she thinks might interest her students and teem with countless secrets that immediately interest Benny herself.

The Book of Lost Friends alternates between Hannie’s post-Civil War quest and Benny’s contemporary investigations. The two tales function in tandem with each other, separate but somehow counterpoint in ways the reader must puzzle through. More important than the puzzle, however, are the charismatic personalities. It is a pleasure to accompany the two young women, and the reader is constantly cheering for their triumphs, large and small. Likewise, Hannie’s traveling companions and Benny’s students provide layers of interpersonal complexities that I thoroughly enjoyed.  Even the Gossett family—past and present—adds a consequential depth to the novel’s success.

Most important, The Book of Lost Friends urges us all to pay attention to a Black Lives Matter past. Those are my words, not Wingate’s, but in truth, she is opening a book of wounds that my contemporaries may not fully understand. As I read, I tried to imagine what it must be like to have a history of slavery and of family ripped apart? What must it be like to not know your own heritage? And to have that heritage constantly denied? An enormously affecting novel, The Book of Lost Friends tacitly underscores that Black Lives Matter matters deeply.  –  Ann Ronald

Also available by Lisa Wingate:  Before We Were Yours; The Prayer Box; Before and After (with Judy Christie); The Story Keeper; Tending Roses; The Sea Keeper’s Daughter; Dandelion Summer; A Month of Summer; Good Hope Road; The Langue of Sycamores; A Thousand Voices; Larkspur Cove; Drenched in Light; The Summer Kitchen; Blue Moon Bay; The Sea Glass Sisters, Prelude to The Prayer Box; Beyond Summer; Wildwood Creek; Word Gets Around; The Tidewater Sisters; Texas Cooking; Talk of The Town; Never Say Never; Lone Star Café; The Sandcastle Sister; Over the Moon at The Big Lizard Diner; Jolas Briefe; The Shores of Moses Lake 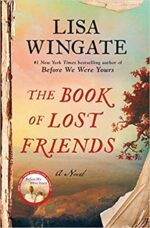 Ann Ronald is a retired English professor from the University of Nevada, Reno. Author of dozens of reviews, she’s also written a number of books about the American West. They include literary studies such as The New West of Edward Abby and Reader of the Purple Sage, cultural studies such as GhostWest and Oh, Give Me a Home, and nature writing such as Earthtones: A Nevada Album. Her latest is a work of fiction, Friendly Fallout 1953. Since retiring, she’s been reading vociferously, so “Bookin’ With Sunny” is giving her a wonderful opportunity to share thoughts about her favorite new discoveries.
More from this reviewer
PrevRedhead by the Side of the Road
Bad TouristNext