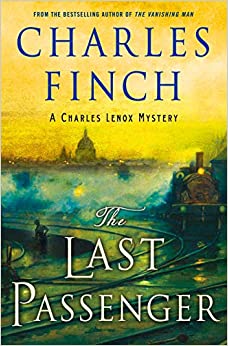 The Last Passenger is Charles Finch’s thirteenth mystery featuring Victorian detective Charles Lenox. Interestingly enough, the latest three in the series, The Last Passenger plus A Woman in the Water and The Vanishing Man, are prequels that describe Lenox’s first cases when he was just learning the art of detection. I have read several Lenox mysteries, but not the two other prequels, so I was most interested to learn some of the underpinnings of his unusual career.

Charles Lenox, the second son of a wealthy Victorian family, was expected to join the military or the church, or else to lead a life of studied leisure. He definitely is not supposed to work at any sort of trade. Detective work, most assuredly, is frowned upon by others of his class. But Lenox, determined to follow his inquisitiveness and his instincts, wants to unravel mysteries and to establish a new profession. He is fascinated, not only by the appearance of dead bodies but also by the logical progressions needed to solve intriguing cases without apparent clues.

The Last Passenger opens with a bloody, eviscerated corpse found languishing in the third-class carriage on the train from Manchester to London. Anything that might identify the victim has been removed, including all the tags from the man’s clothes. This anonymity, as well as the violence involved, pose a mystery. How could this murder happen on a moving train? Why did no one notice? The mystery surely piques Lenox’s curiosity.

There are several reasons for enjoying his subsequent ratiocinations. Most important is the fact that Lenox is a most intriguing character. How he negotiates the balance between his career and his obligations to his heritage is a textbook examination of Victorian modes and mores. This novel, like the others in the Lenox series, moves seamlessly between the drawing room and the tavern, between the mean streets and the backbenches of Parliament, between upper class expectations and worlds of prostitutes and barroom brawlers. A Lenox reader learns relevant history, too, for Finch carefully sets each Lenox novel in a historical context. The Last Passenger, for example, takes place in 1855-56, when Great Britain was struggling with its official position regarding slavery in America.

Other characters in Lenox’s world are just as interesting as the young detective. His brother and his family, his next-door neighbors, his valet (and sounding board), certain Scotland Yard inspectors, an American investigator who takes an interest in the case, even the attentive newspaper boy who always seems to reappear. Equally attractive is the unraveling of the clues. Lenox’s intuitions are a marvel to behold, but they follow the kind of logical progression that mystery lovers enjoy. I can strongly recommend this series to anyone who craves more Sherlock Holmes, more Lord Peter Wimsey, more Thomas Linley.

Finally, one more ingredient makes The Last Passenger and all the other Charles Lenox books especially appealing. Finch loves to include pertinent trivia. In this novel, for example, I learned the provenance of “mind your p’s and q’s,” the provenance of greensleeves, of cold turkey, of widow’s weeds, and the list goes on. With every turn of a page, it seems, I discovered an unexpected fact that added to the ambiance of Lenox’s Victorian world(s). Finch’s marvelously inventive imagination creates a nineteenth-century milieu I think even Charles Dickens would have admired. For today’s reader, a Charles Lenox novel is a welcome depiction of that shadowy Victorian London and its complex physical and psychological layers. –  Ann Ronald

Also available by Charles Finch: A Beautiful Blue Death; The September Society; The Fleet Street Murders; A Stranger in Mayfair; A Burial at Sea; A Death in the Small Hours; An Old Betrayal; The Laws of Murder; Home by Nightfall; The inheritance; The Woman in the Water; The Vanishing Man; An Extravagant Death; The Last Enchantments. 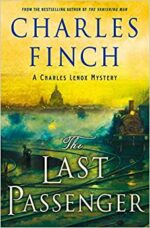 Ann Ronald is a retired English professor from the University of Nevada, Reno. Author of dozens of reviews, she’s also written a number of books about the American West. They include literary studies such as The New West of Edward Abby and Reader of the Purple Sage, cultural studies such as GhostWest and Oh, Give Me a Home, and nature writing such as Earthtones: A Nevada Album. Her latest is a work of fiction, Friendly Fallout 1953. Since retiring, she’s been reading vociferously, so “Bookin’ With Sunny” is giving her a wonderful opportunity to share thoughts about her favorite new discoveries.
More from this reviewer
PrevBefore We Were Yours
Lost RosesNext