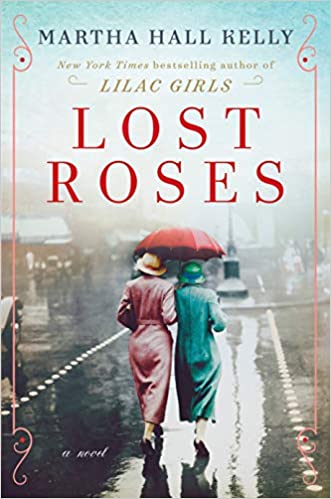 Lost Roses – The American Ferriday women (of the Lilac Girls) are again involved in helping women and families displaced by the devastation of war.

Lost Roses is Martha Hall Kelly’s prequel to Lilac Girls, a novel I previously (and enthusiastically) reviewed for “Bookin’ with Sunny.” Caroline Ferriday, featured prominently in Lilac Girls, was a real-life debutante and socialite who worked tirelessly to help European children orphaned during World War II and who advocated for the punishment of Nazi war criminals following the war. Just as Kelly fictionalized Caroline’s not-insignificant accomplishments, now she has re-imagined the equally impressive achievements of Caroline’s mother. Eliza Ferriday set the standard for her daughter, working nonstop to help White Russian women marooned after World War I, setting up committees and organizations to find places for the women to live and situations where they might earn their livelihoods.

Thematically, both of Kelly’s novels center on a difficult subject. How do women, especially well-to-do women, cope when war utterly transforms their families and their fortunes? Kelly chooses three particular women as central to her thematic constant. The Ferriday women, Americans drawn from real life, remain relatively untouched but contribute mightily from afar. The other main characters are imagined composites of women who suffered more directly from the perils of war. I found Lost Roses to be a kinder novel than Lilac Girls, however, because so much of Kelly’s first novel occurred in Ravensbruck, a horrendous Nazi internment camp. This book also contains insane cruelty, but because it is free from death camp horrors it seemed less malevolent to me.

Alongside the historic Ferridays, Lost Roses concentrates on two other fictional families, the Streshnayvas and the Pushkinskys. Sofya Streshnayva Afonovich, directly related to the Romanovs, has been surrounded by wealth and raised in splendor. She is ill-prepared for the 1916 uprising that demolishes the family estate and leads to incredible suffering. Sofya is resilient, however. One of the things that keeps her going is her friendship with Eliza, her soulmate during their years together in school in France. The other, now that her husband is away at war, is her son, Max. Varinka Pushkinsky is Max’s nursemaid. Her mother is a noted fortuneteller, but ill-health and poor nutrition have laid the Pushkinskys low. Adding to their grief is a Bolshevik ringleader. Adopted by Varinka’s father, the malfeasant Taras brutalizes the Pushkinsky women and personally commands the Red horde that invades the Streshnayva’s domain.

Kelly tells the individual stories of Eliza, Sofya, and Varinka in separate, almost staccato chapters, while simultaneously weaving the web that ties their woes together. Lost Roses proceeds for four years, from the revolution of 1916 to the relative peace of post-war France and post-war America, though the bulk of the novel coincides directly with the traumas of war. Nearly every page shows a woman coping with her unchosen destiny, as an incredible array of traumas and pain upend everyone’s lives. But there are moments of love and kindness, too, chapters that brought tears to my eyes and chapters that brought a smile to my face. I think that is why I so strongly recommend both Martha Hall Kelly novels. Such strong women characters, fending for themselves; such internal philosophical underpinnings, exposing the unforeseen consequences of war.

And it appears there is a third prequel in the works! Apparently, Eliza’s grandmother, a staunch abolitionist, was a presence as forceful during the Civil War as her granddaughter and great-granddaughter were in the conflicts of the subsequent century. Jane Eliza Newton Woolsey’s anti-slavery and medical story tantalizes Martha Hall Kelly; it tantalizes me as well.  –  Ann Ronald 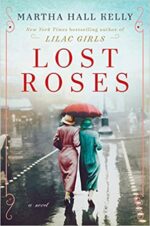 Ann Ronald is a retired English professor from the University of Nevada, Reno. Author of dozens of reviews, she’s also written a number of books about the American West. They include literary studies such as The New West of Edward Abby and Reader of the Purple Sage, cultural studies such as GhostWest and Oh, Give Me a Home, and nature writing such as Earthtones: A Nevada Album. Her latest is a work of fiction, Friendly Fallout 1953. Since retiring, she’s been reading vociferously, so “Bookin’ With Sunny” is giving her a wonderful opportunity to share thoughts about her favorite new discoveries.
More from this reviewer
PrevThe Last Passenger
The Light of Evening, A Brief Life of Jack FoleyNext