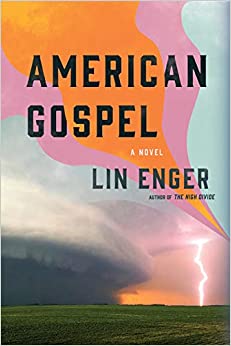 American Gospel – Lin Enger’s immensely engaging novel of a messianic Minnesota preacher you will find it hard to turn away from.

As I have noted before, one of the best things about my “Bookin’ with Sunny” connection is when Sunny hands me a book that I otherwise would never pick up, when I read it, and when I discover I like it immensely. Such is the case with American Gospel, Lin Enger’s novel about a Minnesota preacher, his family and friends, and his rapturous encounters with the Lord. Most of the action takes place in 1974, the week of President Richard Nixon’s resignation, so there’s a messianic undercurrent of politics, too, one that heightens the poignancy of Enger’s prose.

Three key moments highlight Enoch Bywater’s long and righteous life. The first occurred many years ago, when he laid hands on a neighbor girl who had been stepped on by a bull. Miraculously, she was unharmed. The second sets the action of American Gospel in motion when Preacher Enoch suffers a near fatal heart arrhythmia. While unconscious, with a passerby and then medics paddling his chest, Enoch envisions the Rapture which will occur in just two weeks. This prophetic vision propels the action of the novel, driving away some commune members who live on Enoch’s Last Days Ranch while attracting others who want to be there for the glorious event. Included among those arriving are Bywater relatives and long-lost neighbors, as well as itinerant onlookers and members of the press looking for a big story.

Here’s where my review of American Gospel turns even more oblique. Not only do I not want to reveal any of the strands of plot, nor do I want to reveal the ending of the novel, but I also cannot do the heart and soul of Enger’s book any justice at all. I thoroughly enjoyed the characters and the storyline. However, because my own conventionally-protestant religious training stopped when I finished sixth grade, I’m afraid I missed countless allusions and metaphorical references that seemed to be appearing on every page. Someone well-versed in biblical myths and mores will get far more from American Gospel than I did. And undoubtedly could write a much more in-depth review.

Suffice to say that Enger has written a novel that probes not only matters of faith and, most especially, evangelical belief, but he has also written a plot that echoes contemporary politics and explores how evangelical belief dictates the ways people respond not only to daily ups and downs but also to the vagaries of Washington, D.C. American Gospel probes rural midwestern life, too, and how it is (and isn’t) reflective of the rest of American existence. Most of all, it puts its finger on the pulse of true believers, naysayers, and a host of other people who don’t know quite what to make of life’s important questions.  – Ann Ronald. 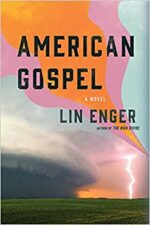 Ann Ronald is a retired English professor from the University of Nevada, Reno. Author of dozens of reviews, she’s also written a number of books about the American West. They include literary studies such as The New West of Edward Abby and Reader of the Purple Sage, cultural studies such as GhostWest and Oh, Give Me a Home, and nature writing such as Earthtones: A Nevada Album. Her latest is a work of fiction, Friendly Fallout 1953. Since retiring, she’s been reading vociferously, so “Bookin’ With Sunny” is giving her a wonderful opportunity to share thoughts about her favorite new discoveries.
More from this reviewer
PrevThe Last House on The Street
Before We Were YoursNext