A Banquet for Hungry Ghosts 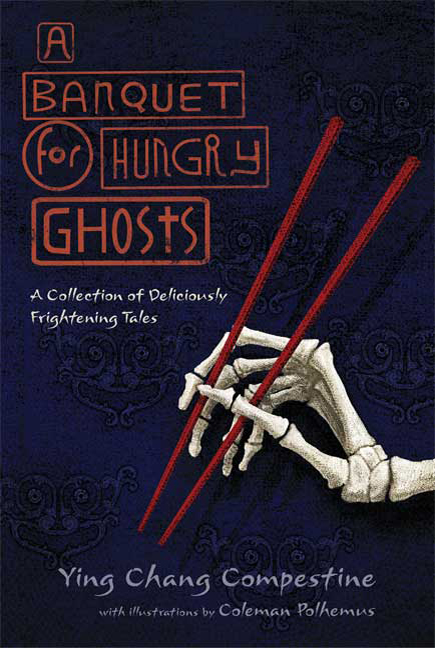 A BANQUET FOR HUNGRY GHOSTS – NEWS

I am a huge fan of Ying Chang Compestine, which makes me happy to republish my updated review of A Banquet for Hungry Ghosts, and the exciting news that it is scheduled to be adapted as an animated TV series!

A young adult book? Not necessarily. This is one terrific book for everyone but the very youngest in the family. Author Ying Chang Compestine is a genius at somehow writing short, gory ghost stories and then tying them onto the cooking and history tails of a mighty strange critter called A Banquet for Hungry Ghosts.

In our multicultural society, we’ve certainly become accustomed to the sugar and chocolate skulls, bread skeletons, and other Mexican food traditions surrounding the celebration of Dias de los Muertos, Days of the Dead. But trust me, according to what you will learn in Compestine’s latest book, Chinese traditions go enthusiastically and gruesomely for broke when it comes to honoring their dead. One ancient belief holds that those who die hungry or angry will return as avenging ghosts to devour (yes, gentle reader, consuming flesh and bone) those who betrayed, murdered, or starved them. Appeasing the avenging ghosts with a hearty serving of their favorite foods is one’s only chance to avert such grisly revenge.

Each tale is told in a master storyteller’s voice. Then, just when you’ve settled down your tummy’s churning after a story of a leg-chomping ghost, the author presents you with an engaging piece of writing about the historical setting, cultural tradition, and particular food offered to that tale’s ghost. Compestine, who is a chef herself, begins with tales connected to appetizers, then on to main courses and finally to desserts. A recipe for the featured food follows each story.

I haven’t been so scared since I was a kid and covered my ears so I wouldn’t have to hear the end of that tale about The Hand! Here’s the best part: Compestine’s having a great time. One of the early stories involves a seventh-grader who lives as the only girl in a medical compound. She “befriends the boys who lived there.” With tongue in cheek, the girl admits, “So far, this arrangement hadn’t worked out very well.” Her attempt at bravery, related to sneaking about the hospital morgue, is priceless. But no matter how scary the tale, by the time Compestine gets to the recipe, the reader, kid or adult, is eager to start cooking.

Compestine’s recipes are clear and uncomplicated, just like her stories and historical notes. In addition to Compestine’s writing, Coleman Pohemus’ illustrations add a delicious artistry to such gruesome tales. A Banquet for Hungry Ghosts is a perfect read for the homebound during the pandemic or the Halloween festivities just ahead. — Sunny Solomon 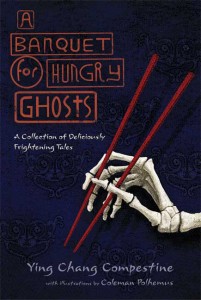 Sunny Solomon holds an MA in English/Creative Writing, San Francisco State University. She is a book reviewer for “The Clayton Pioneer” and her poetry and other writing has been published in literary journals, one chapbook, In the Company of Hope and the collection, Six Poets Sixty-six Poems. She was the happy manager of Bonanza Books, Clayton, CA and Clayton Books, Clayton, CA. She continues to moderate a thriving book club that survived the closure of the store from which it began. Sunny currently lives next to the Truckee in Reno, NV.
More from this reviewer
PrevThe Peasant Prince, Thaddeus Kosciuszko and the Age of Revolution
The Book of the Unknown, Tales of the Thirty-SixNext