Home » Reviews » The Peasant Prince, Thaddeus Kosciuszko and the Age of Revolution

The Peasant Prince, Thaddeus Kosciuszko and the Age of Revolution 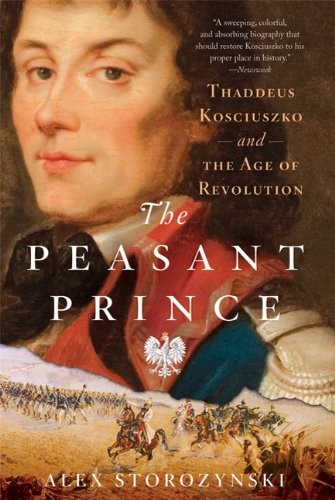 Here’s the last Polish joke ever: How many Poles does it take to build a proper fortification of the Hudson Valley? Answer: Only one if his name is Thaddeus Kosciuszko. Thaddeus who? Kosciuszko. Phonetically pronounced, “Kos-chews-ko.”

Pulitzer Prize wining journalist Alex Storozynski has written a compelling biography of this important Polish freedom fighter who lent his military, engineering and philosophic prowess to the American Revolution. Unless you are a California transplant from New York or maybe east of Ohio, where there are any number of monuments honoring him, you’ve probably never heard of Kosciuszko. After reading this amazing biography, I started pulling down my own books to see how I could have missed him.

Not a word of him in my college text; only a short note under Foreign Volunteers and Mercenaries in Schlesinger’s Almanac of American History; then name only under Aid From Distinguished Foreigners in Bear and Bagley’s 1934 edition of The History of the American People; but at least a picture of Kosciuszko’s memorial pedestal at West Point was included with his name in the 1883 edition of Lothrop’s Library of Entertaining History/History American People.

Storozynski’s writing is not the dry stuff of military history remembered from high school. He has given us the full countenance of this remarkable Polish nobleman who was drawn to the revolution in America by his desire to free his own beloved Poland from the tyranny of Russia. Earnest and idealistic, Kosciuszko arrived in Philadelphia in August 1776, presented himself without letters of introduction to Benjamin Franklin, and offered his military and engineering services to the new Continental Army.

Kosciuszko’s romantic background includes a thwarted love, an immense appreciation of women, and a strong sense of loyalty and devotion to his country and ours. Kosciuszko steadfastly believed that all people, European serfs, American slaves, American Indians, Christians of all ilks, Jews, Muslims, all had a right to live as free citizens in a republic world.

Storozynski’s description of military life in the Continental army was particularly enlightening. Take away the heroic officers’ swords, pistols and rifles, and what remained was their backstabbing, lying, and slanderous efforts to improve their military standing over each other. But it was the modest and almost unassuming Kosciuszko whose engineering skills, talent for knowing just where to build redoubts, those outworks protecting the larger, permanent fortifications, that gave the Continental soldiers a critical edge in spite of being outnumbered by the more heavily armed British. We can thank Kosciuszko for our success at Saratoga and West Point and in securing the war effort in the south. Benedict Arnold’s downfall was his traitorous attempt to sell Kosciouszko’s West Point plans to the British.

Kosciuszko returned to Poland at the end the American Revolutionary War, more certain than ever that European feudalism must come to an end. He left without being paid, but asked Jefferson to use that money to free and educate Jefferson’s slaves.

Kosciuszko’s return to Poland, and his leadership in two failed attempts to drive out the Russians, Prussians, Austrians, and everyone else staking a claim to what was once Poland, is as stirringly and compellingly told as his involvement in the American Revolution. He returned to America once before his death in Switzerland. It would be another 100 years before Poland was returned to nationhood.

Storozynski’s book pulls the American Revolution and it’s death knell of aristocracy into the machinations of similar bell ringing in Europe. His rendering of a world more than 200 years ago has an eerie immediacy in light of today’s globalization. Read this book. Learn how to say Kosciusko. It is a name you will not soon forget. 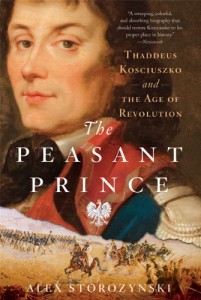 Sunny Solomon holds an MA in English/Creative Writing, San Francisco State University. She is a book reviewer for “The Clayton Pioneer” and her poetry and other writing has been published in literary journals, one chapbook, In the Company of Hope and the collection, Six Poets Sixty-six Poems. She was the happy manager of Bonanza Books, Clayton, CA and Clayton Books, Clayton, CA. She continues to moderate a thriving book club that survived the closure of the store from which it began. Sunny currently lives next to the Truckee in Reno, NV.
More from this reviewer
PrevFirmin
A Banquet for Hungry GhostsNext