Crouching Tiger and dragons, too. 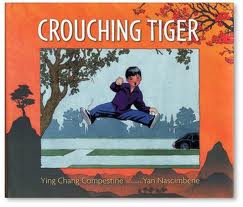 Just in time for Chinese New Year 2012, the Year of the Dragon, is Ying Chang Compestine’s newest picture book, Crouching Tiger. For those of you unfamiliar with Compestine’s writing, you are in for one sweet surprise. The author lives with her family in the San Francisco Bay Area where Chinese New Year is hugely popular across many ethnic lines. San Francisco has the largest Chinese American population in the U.S. and once a year in the Bay Area everyone gets to be a Chinese American. An earlier book of Compestine’s also has a Bay Area tie-in.

The story is a simple one. Vince, a young and typically American boy, also happens to be a Chinese American whose grandfather has come all the way from China to visit. On the first morning of Grandpa’s visit, Vince watches him from the kitchen window. “Grandpa was dancing slowly in the garden with his eyes closed. His hands moved like gliding birds. He crouched like a tiger; he drew an invisible bow; he lifted a foot like a rooster and stood still.” From that moment on, Vince, called Ming Da by his Grandpa, is both fascinated and slightly embarrassed by his grandfather’s behavior.

The subtleties of Compestine’s writing, even in a picture book, are what make her such a treasure. Ming Da “ran” outside to ask Grandpa what he was doing. Before answering the boy, Grandpa formally greets him, “Good morning.” He tells Ming Da he is practicing tai chi, a martial art. Ming Da immediately asks, “Like kung fu?” Without waiting for an answer, he “showed off” his “fastest kicks and punches.” Grandpa watches Ming Da without a word. The boy stops and in a low and now embarrassed voice asks to be taught tai chi. Grandpa looks him in the eye, and still silent, nods yes.

One morning while walking to school with Grandpa, Ming Da, who had “jammmed” his headphones on so that he didn’t have to talk to Grandpa, is shocked when Grandpa prevents an accident from happening between an unsuspecting pedestrian and a laborer carrying a board off his truck. Just as the board was about to strike the pedestrian, “In a smooth motion, Grandpa crouched like a tiger swept up a leg, and kicked the board, breaking it neatly in half.” A lesson has been learned and Ming Da’s life begins to slow down as he takes the time to practice both meditation and tai chi with Grandpa, but not without hoping to learn a more active part of tai chi. Patience does not come easily to Ming Da.

Compestine walks the non-Chinese reader through preparations for the New Year celebration. Ming Da doesn’t want to wear the red silk jacket with dragon decorations that Grandpa gives him. When Grandpa takes him to Chinatown where he is proudly introduced to his many friends, Ming Da would rather be with his own friends than taking the red envelopes with money that Grandpa’s friends keep giving him. Just before the parade begins, Ming Da sees some men wearing the same red jackets as he is wearing. They are the lion dancers and are taking orders from his Grandpa. Ming Da is surprised when he is handed a bamboo pole with a cabbage hanging from its top and told he is to be part of the parade. His job is to keep the lions from reaching the cabbage until the very end of the parade.

Compestine’s story has a beauty all its own, but Crouching Tiger is enormously enhanced by the illustrations of Yan Nascimbene, an artist whose award-winning work is exhibited worldwide. The quiet and peacefulness of Grandpa is carried out in Nasciembene’s illustrations with subdued colors and subtle details emphasizing Compestine’s text. A picture of note is one in which Ming Da and Grandpa are on a bus. Ming Da is wearing a hooded jacket and he appears to be reading a book while Grandpa sits next to him with his hands folded in his lap. A peaceful scene until one looks carefully and sees that Ming Da is not entirely intent on his book; his eyes turn (not his head) slightly toward Grandpa, and although Grandpa’s eyes take in Ming Da’s attempt at seclusion, his face tells the reader that he understands what his grandson is feeling. It is not until the night of the parade that Nascimbene’s illustrations transform themselves with animation and deep bright colors befitting crowded streets, noisy firecrackers, and a lively dragon.

Candlewick Press, always a publisher parents can trust, has produced a very special book with wonderful details such as a glossary of some Chinese words and phrases and small, simple drawings of Ming Da in tai chi stances at the bottom of every page of Compestine’s text.

Crouching Tiger is not just the story of a Chinese New Year celebration with its traditions, but also a story of the time and patience it can take for one generation to understand another and the wisdom that comes from such understanding.

Sunny Solomon holds an MA in English/Creative Writing, San Francisco State University. She is a book reviewer for “The Clayton Pioneer” and her poetry and other writing has been published in literary journals, one chapbook, In the Company of Hope and the collection, Six Poets Sixty-six Poems. She was the happy manager of Bonanza Books, Clayton, CA and Clayton Books, Clayton, CA. She continues to moderate a thriving book club that survived the closure of the store from which it began. Sunny currently lives next to the Truckee in Reno, NV.
More from this reviewer
PrevMy Friend Dahmer
Life Doesn’t Frighten MeNext