Home » Reviews » Revolution Is Not a Dinner Party

Revolution Is Not a Dinner Party 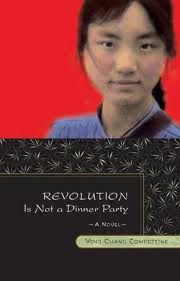 Revolution Is Not a Dinner Party, the title of Ying Chang Compestine’s first novel, is nothing short of brilliant irony. Ms. Compestine, like her protagonist, Ling, survived Mao’s Cultural Revolution (a time marked by constant hunger) to become the author of three cookbooks and a popular authority on Chinese cooking and culture.

It’s hard to pick a place to begin in recommending this book. First, it’s a “cross-over” novel, which, in the trade, means a book for both young adults (10 yrs. and up) and general readership. And second, because China and all things Chinese are a big part of our lives and will be an even larger part of our children’s lives, Compestine’s book is a good beginning to better understand China’s recent past. The year is 1972 when the story opens and it ends shortly after Mao’s death in 1976. Ling is almost nine years old in 1972, and it is through her eyes that we experience her fear and terror when, “Danger began knocking on doors all over China.”

Ling is a bright and vivacious only child. She is the great joy of an easy-going father and the consternation of a perfectionist mother. The family lives in a hospital compound where her father practices Western surgery and her mother practices traditional Eastern medicine. The tie-in to the San Francisco Bay Area is a picture of the Golden Gate Bridge given to her father by his teacher, a visiting American doctor. It is her father’s hope that some day Ling will travel to see the Golden Gate Bridge.

The picture of the bridge, perceived as a bourgeois symbol to the marauding Red Guard, is finally hidden behind Chairman Mao’s picture on their mantle. When Ling’s parents burn letters, old photographs and other family mementos, the picture of the Golden Gate Bridge becomes their hidden icon of resistance.

Compestine tells Ling’s story in language both youthfully direct and emotionally honest. In her father’s eyes, Ling can do no wrong. With her mother, it is different: “I believed Mother was unhappy with me because she had never wanted to have a daughter.” She wishes her mother loved her “the way I was, like Father did.”

When Ling’s father is taken away by the Red Guard as an enemy of the people, we remember her biggest worry: “How could I learn every one of Mother’s rules so I wouldn’t upset her?” Mother and daughter must build a relationship to survive. In the ensuing four years, Ling experiences loss, hunger, betrayal, fear and confusion, all topics worth generating lively family discussions.

Ying Chang Compestine, Ling’s creator, not only came to America, but on a clear day, when coming through the Caldecott Tunnel from her home in Lafayette, California, she can now almost reach out and touch the Golden Gate Bridge.

We recommend  Revolution Is Not a Dinner Party for the entire family and after it’s been read by all, go out to your favorite Chinese restaurant and celebrate. Talk about what is familiar in the story, what is surprising, or how you might have reacted had it been your family. A Chinese feast is a great way to celebrate your family, celebrate your freedom.

Sunny Solomon holds an MA in English/Creative Writing, San Francisco State University. She is a book reviewer for “The Clayton Pioneer” and her poetry and other writing has been published in literary journals, one chapbook, In the Company of Hope and the collection, Six Poets Sixty-six Poems. She was the happy manager of Bonanza Books, Clayton, CA and Clayton Books, Clayton, CA. She continues to moderate a thriving book club that survived the closure of the store from which it began. Sunny currently lives next to the Truckee in Reno, NV.
More from this reviewer
PrevThe Philosophical Breakfast Club
Moral DisorderNext