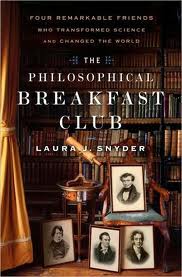 The Philosophical Breakfast Club may be the book to answer questions you never knew you wanted to ask. How did we get from Jacquard’s loom to a 21st-century game show touting artificial intelligence? When did the idea of a global economy, including a loss of jobs to foreign lands, first appear? Who could have imagined that the mapping of world tides would make air travel safer? Could William Hershel have dreamed the work his son John would complete in mapping the stars? And how did four young university men, meeting for breakfast on Sunday mornings in Cambridge to discuss the importance of championing Francis Bacon’s inductive reasoning, change forever the world of science?

I do not pretend that science is my thing, but Laura J. Snyder has written one of the best books out this year. The Philosophical Breakfast Club, a narrative history of the world of science in Victorian Great Britain, not only makes a subject many of us left behind in our high school chemistry labs come alive but also makes it powerfully relevant to the world we live in today.

John Hershel, William Whewell, Richard Jones, and Charles Babbage were all born within four years of each other; became acquainted in their Cambridge years and formed a long-lasting friendship based on their mutual admiration of Francis Bacon. Snyder’s description of each of the men’s lives, their families, their discoveries, successes, and failures, is written with depth and honesty. The author fleshes out these remarkable men making use of her own inductive observations. We understand them as sons, scholars, husbands, and fathers, but that’s only one reason to recommend this book.

Her treatment of the world of science (philosophy) takes the reader from the late 1700s well into the 1800s, a period of both great discovery and great public fascination with science at almost every level. The general public attended lectures, demonstrations and eagerly devoured books of a scientific nature. The Industrial Revolution’s explosion of invention was not unlike our Silicon Valley of the 1970s. Without skipping a beat, the story Snyder tells runs parallel to much of what we experience in the 21st century. For the layperson, whose only practical association with science involves taking our meds, turning out the lights, flying to visit our children, and using our PCs and laptops as best we can, this book is a lively, accessible, and very close look at the world of modern science in its infancy.

The subjects covered in Snyder’s book include the effects of a global economy; the need to study the effects of job loss as a result of technological advances; economics as both domestic and political areas of study; the need to understand a natural theology in light of Darwin; the question of whether and how science and theology can coexist; the need for a machine to calculate with accuracy and speed (another instance of job loss). This is not a fast read, but once started it is hard to put down.

The scientific method, following in the footsteps of Francis Bacon, is as important today as it was for Hershel, Babbage, Jones, and Whewell. Snyder shows the layperson that the distance we’ve traveled since Victorian times may not be as great as we think. That a person could make a livelihood from science was a revolution itself. Even more revolutionary is the myriad of scientific professions practiced today, some so esoteric that they no longer speak to the world, but only to each other. The book does not end with the death of the last member of the Philosophical Breakfast Club; the author takes us into the 20th and the 21st centuries, inviting us to read closely, gather information, and think about what we might learn.   – Sunny Solomon

Sunny Solomon holds an MA in English/Creative Writing, San Francisco State University. She is a book reviewer for “The Clayton Pioneer” and her poetry and other writing has been published in literary journals, one chapbook, In the Company of Hope and the collection, Six Poets Sixty-six Poems. She was the happy manager of Bonanza Books, Clayton, CA and Clayton Books, Clayton, CA. She continues to moderate a thriving book club that survived the closure of the store from which it began. Sunny currently lives next to the Truckee in Reno, NV.
More from this reviewer
PrevA Split Second of Light
Revolution Is Not a Dinner PartyNext